Recap: Shooting and Scoring With Peter Berg and Connor Schell 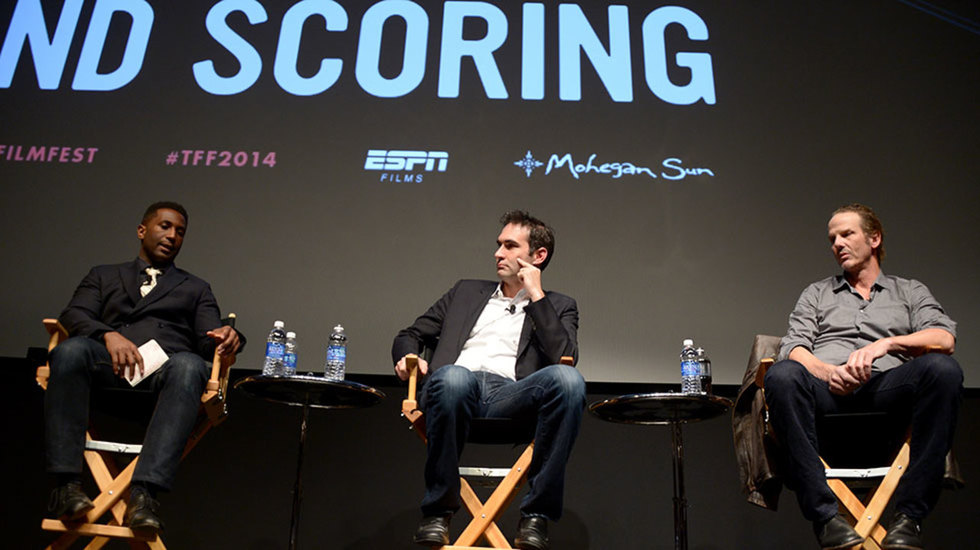 You don’t have to be a sports fan to appreciate ESPN’s documentary series 30 for 30, you just have to enjoy a great story. You have to appreciate drama that takes you to unexpected depths of emotion. You have to love cinema. The same could be said of the television show Friday Night Lights, which ran for five seasons from 2006 to 2011.

Peter Berg is the man responsible for bringing the story of head coach Eric Taylor and his Dillon Panthers to life (in addition to launching a million crushes on Minka Kelly, aka cheerleader Lyla Garrity and Taylor Kitsch, aka bad boy Tim Riggins). Berg directed the film version of Friday Night Lights, as well as Lone Survivor, The Kingdom and - it pains me to write this - Battleship. His latest project is the engrossing HBO Sports documentary State of Play. Less of a household name is Connor Schell, who, in 2008, came to ESPN with the idea of creating the now-landmark documentary series. Today, he’s the Vice President and Executive Producer of ESPN Films and Original Content.

Last night, as part of the Tribeca/ESPN Sports Film Festival, the two men sat down with Grantland contributor Wesley Morris at Manhattan’s School of Visual Arts to discuss how to craft a story about sports that feels personal and resonates so deeply that your knowledge of the game becomes irrelevant.

Here are highlights from their conversation:

Berg on the sports classic Caddyshack: “I think Bill Murray’s strategy in fighting gophers was emotional and funny and heartfelt and passionate.”

Schell on the philosophy of the 30 for 30 series: “We sell stories about culture and sports is your window in.”

So when you’re telling a true life story and all the material is documented why not tell it as a documentary.

Peter Berg talked about the short but impactful reign of his Friday Night Lights series.

Berg on his approach to storytelling: “Battleship and Hancock are a different kind of film - and we can talk about that later - but my heart and why I love doing things like 30 for 30 is that it gives me a chance to go deep into a culture. I think if you go deep, if you find the truth and you tell it, you’re going to succeed.”

Berg on his most nervous moment after finishing Friday Night Lights: “It was a screening we did for Pete Carroll and his USC Trojans. I knew that when the lights came up in that screening and I would look in the eyes of those 21-year old football players and Pete Carroll and his coaching staff, there would be no bullshit. There would be no glad-handing or Hollywood speak. It would be yes, no, or that was right.”

Berg on hitting balls on the golf range with Wayne Gretzky, the focus of his 30 for 30 doc Kings Ransom: “Gretzky won four Stanley Cups with Edmonton and then they broke the team up and he came to L.A. and won zero. I asked him, ‘how many do you think you would have won if you stayed at Edmonton?’ He didn’t hesitate. He said, ‘Eleven.’ I said, ‘Do you think about that a lot?’ He said, ‘Every day.’ And a tear came out of his eye. And I was, like, whoa! This is really awesome.” [The crowd laughed.] Berg continued: “Because it gave me this simple idea and we could go deep into it."

Schell on recreating sports action in a fictional movie: “It’s really difficult. Sports fans have a definite sense of perspective. You’re not going to go make a movie about Brett Favre and have sports fans walk into that movie without a full set of preconceived notions of how you need to tell the story — what the actor needs to look like, what the action on the field needs to be. So when you’re telling a true life story and all the material is documented why not tell it as a documentary. Let people relive the experience but give them context and perspective and make them think about it in a different way.”

Berg explains one reason the show Friday Night Lights survived five seasons: “We were able to shoot very quickly. What most TV shows would spend nine days on, we would do in three. We were able to do it for so cheap that when the ratings were struggling we were able to stay on.”

Schell on the endless number of pitches he gets for 30 for 30 films: “It ends up becoming more important what you say no to than what you say yes to. When you create something that people have an affinity for, and you have a level of quality in your brand, you have to be diligent about not compromising.”

Berg on NBC’s original ad campaign for Friday Night Lights which featured a shirtless, oiled-up Taylor Kitsch holding a football: “Taylor was saying, ‘They’ve got a wind machine on me and they’re taking pictures and this feels horrible. I look like Fabio.’”

Berg on people realizing that Friday Nights Lights was about more than sports: “It was about a realistic, achievable marriage that was flawed and full of challenges, but at the end of the day these two people form a team and a pact to have each other’s back.

Schell on the Steve James 1994 documentary Hoop Dreams: “It’s hard to remember now how revolutionary that movie was. I’d never seen anything like it. This was real people telling real stories.”

Berg on the impact of recent changes in the TV business model, exemplified by the Netflix/House of Cards deal: “It’s getting much harder to get legitimate showrunners, really talented guys like Vince Gilligan. If you’re NBC or a network and you’ve got commercials and you’re asking for a 22-episode season, that’s asking for somebody’s blood. Maybe you’re promising more money but the talented filmmakers and creators of television are going to go to Netflix and pay services and Xbox and whatever distribution platform exist in that new moment. I’m sure Apple will be funding their own shows soon.”

Berg on the binge-watching phenomenon: “It’s awesome. I was up two days watching the last season of House of Cards.” To a random audience member in the front row: “I wish you had called me. I needed to talk to somebody. When they all made out with the secret service agent. I was, like, ‘Oh my God.’ I was alone, like an animal, at four in the morning. It’s a horrible vice. But it’s fun. How is NBC going to offer you that experience? So the best experience will win and somebody will figure out a way to pay them for it.”

Matthew Shepatin is the author of three books, including, most recently, Marathon Man (St. Martin's Press) with running legend Bill Rodgers.  He has written for The New York Post, Esquire, Playboy, Black Book Magazine, and The Village Voice. Follow him on Twitter @mshepatin.