Here Are Your TFF 2014 Award Winners

The verdicts are in! The big winners at this year’s Festival include 'Zero Motivation,' 'Keep On, Keepin' On,' 'Point and Shoot' and 'Manos Sucias.' 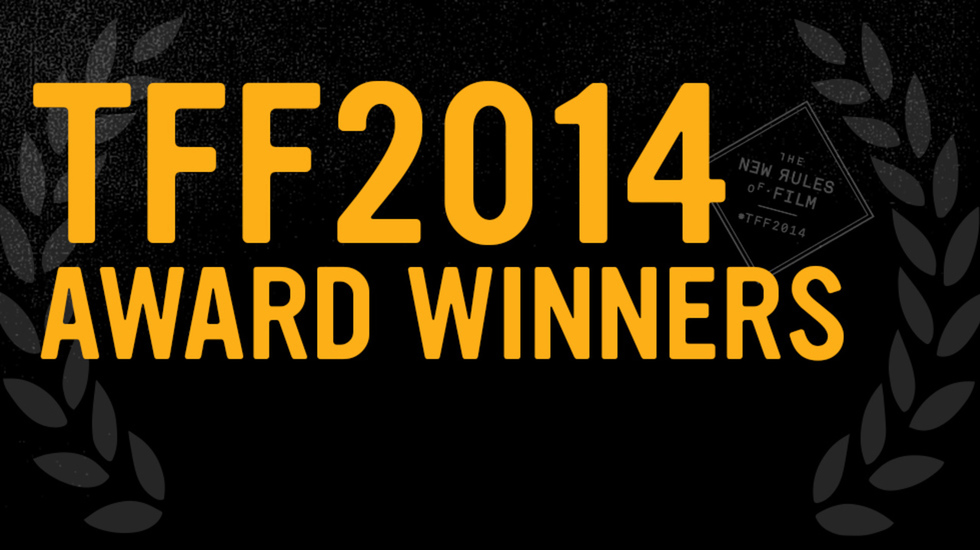 The 13th annual Tribeca Film Festival, co-founded by Robert De Niro, Jane Rosenthal and Craig Hatkoff, and presented by AT&T, announced the winners of its competition categories tonight at a ceremony presided over by Pat Kiernan and hosted at the Conrad New York in New York City.

The world competition winners for narrative and documentary films were chosen from 12 narrative and 12 documentary features from 10 countries. Best New Director prizes were awarded to a first-time director for both narrative and documentary films, selected from a pool of 39 feature films throughout the program. Awards were also given for the best narrative short, best documentary short, and student visionary films in the short film competitions. This year’s Festival included 89 features and 57 short films from 40 countries, programmed by a team led by Tribeca’s Chief Creative Officer Geoff Gilmore, Artistic Director Frédéric Boyer, Director of Programming Genna Terranova, and Programmer Cara Cusumano.

This year the Festival introduced a new award, Best Narrative Editing sponsored by Manhattan Edit Workshop. Also announced at the awards were the Bombay Sapphire Award for Transmedia for the Storyscapes section, created in collaboration with BOMBAY SAPPHIRE® Gin, the Nora Ephron Prize, sponsored by Coach, Inc., and the Tribeca Online Festival feature and short film winners selected by the online audience. The winners of the Heineken Audience Awards, determined by audience votes throughout the Festival, will be announced on April 26.

“We are honored that such talented artists and storytellers chose to showcase their work at Tribeca,” said Jane Rosenthal, co-founder, Tribeca Film Festival. “I want to congratulate all our filmmakers and thank them for being with us for the 2014 festival.”

Jury Comments: “The winner of this year’s Founder’s Award follows young women who must find their place and establish their identity in a world normally dominated by men and machismo.  They do so with humor, strength and intellect.  The filmmaker mirrors these same qualities.  We believe a new, powerful, voice has emerged.”

Jury Comments: “This performance reminded us that even in the most ordinary settings, our lives can summon extraordinary humor, pain, awkwardness, and if we earn it …. dignity.”

Jury Comments: “In her elegant portrayal of a profoundly conflicted wife and mother, this actress crafts a complex performance of a woman wrestling between love, family and obligation.  She layers both strength and fragility without self-consciousness, with a fearlessness to exercise both subtlety and restraint.”

Winner receives $5,000, and $50,000 in post-production services provided by Company 3. The award was given by Ben Younger.

Jury Comments: “The film perfectly captured the energy and hope of the youth in its nation’s capital.”

Winner receives $5,000 sponsored by DreamWorks Animation. The award was given by Bart Freundlich.

Jury Comments: “This screenwriter put a bodybuilder, a gypsy, a prostitute, and a world renowned poet in handcuffs at a dinner table and made it feel right. When a film’s language feels so natural as to make the viewer completely forget that a screenplay was written, the writer deserves special acknowledgement.”

Jury Comments: “The winning film pulls the viewer into its world from its first decision -- to live in the subtle emotional cues of the character’s face for nearly four minutes.   The hypnotic pace keeps the stakes rising throughout.  The attention to detail in the transitions lets us know we are being guided by a true filmmaker.”

Jury Comments: “The award goes to a film that makes its own rules. Working with hundreds of hours of first-person—selfie—footage by Matthew Van Dyke, director Marshall Curry creates an unsettlingly ambivalent and often darkly amusing portrait of a generation hellbent on documenting itself. Do we celebrate the so-called “manliness” of its protagonist—or wonder what the hell he’s doing inserting himself into the middle of a violent revolution, like a Zelig with his own camera? It’s a question viewers will brood on—much as this jury did.”

Jury Comments: “This year’s prize for editing celebrates a pair of filmmakers’ ability to give shape, rhythm, and even mythic beauty to a story that might have been, frankly, a sodden mess. For finding luster in the most unlikely places, the winners of this year’s prize for Best Documentary Editing goes to Sabine Lubbe Bakker and Niels van Koevorden for their bittersweet portrait of two Belgian boozers.”

Winner receives $25,000 sponsored by Warner Bros., $50,000 in post-production services provided by Company 3, and the art award “The Ballad of the Great Eastern” by Stephen Hannock.

Jury Comments: “We have chosen a filmmaker whose journey should truly be an (is an) example to all of us about the commitment to the process of researching and developing a film. Not only did this director spend several years immersed in a marginalized community in order to tell the story in the most truthful way possible, he impacted and contributed to that community. We felt this film was an eye and mind opener, that transported us to a different place, stimulating our thinking, allowing us to meditate on the relationship between violence and circumstance.”

Winner receives $25,000, and the art award “Still Life with View of Hoboken and Manhattan” by Catherine Murphy.

Jury Comments: “We have chosen to honor a filmmaker whose storytelling profoundly affected us all.  This director’s work was not loud, did not call attention to itself, it displayed no excess.  The filmmaking showed incredible focus, artistry, love and dedication.  It told one simple story and told it well.  This film has a beautiful soul, and to some extent it’s about soul. It inspired us, and we wish to honor its filmmaker so that they may continue to inspire others.”

Jury Comments: “This film demonstrates the sheer power of the human voice to convey compassion and understanding via a one-on-one telephone conversation. We have selected it for its simplicity and directness in showing how emotional bonds can be formed by empathetic communication and for its beautifully-measured performances.”

Jury Comments: “One Year Lease is a clever and humorously-constructed story that shows the tension of our human imperfections and our desire for connectedness, using an economy of language to construct a clear portrait of a woman we never see.”

Special Jury Mention
The Next Part
Directed by Erin Sanger

Winner receives $5,000 sponsored by AKA.

Jury Comments: “Tough, intimate, and with a clarity of vision, the winning film is a story of a fiercely strong young woman who is unapologetically herself. The directors have finely crafted a film of coherence and texture.”

The jurors for the 2014 BOMBAY SAPPHIRE® Award for Transmedia were Paola Antonelli, Kira Pollack and Casper Sonnen

Jury Comments: “The winning Storyscapes project is a tentacular documentary that explores a network of ideas thanks to digitally rendered, ectoplasmic talking heads selected and 3D-scanned quotes and questions from the interaction design community. Coders riffing about code, captured through the lens of code. It does not get more meta and abstract than this, and yet it is also surprisingly real and moving.”

Jury Comments: “In her unique and ambitious first feature, this filmmaker deftly handled such difficult themes as the military, sexism, love, ambition, and friendship. This filmmaker also pulled off the awesome feat of managing multiple characters and storylines.  In, what was definitely the most hilarious film we saw at the festival...the winning film is a fresh, original, and heartfelt comedy about life behind the scenes in the Israeli army.”

In Chef, after talented and dynamic chef Carl Casper’s (Favreau) social media-fueled meltdown against his nemesis food critic lands him without any job prospects, he hits the road with his son and his sous chef (John Leguizamo) to launch a brand new food truck business. Complete with lavish food imagery and a star-studded cast including Sofia Vergara, Robert Downey Jr., Scarlett Johansson, Dustin Hoffman, Oliver Platt, and Amy Sedaris, Favreau’s fresh take on food and chef culture has poignant messages about the media-driven world in which we live and the real meaning of success.

Keep On Keepin' On chronicles eighty-nine year old trumpeting legend Clark Terry who has mentored jazz wonders like Miles Davis and Quincy Jones. Terry’s most unlikely friendship is with Justin Kauflin, a 23-year-old blind piano player with uncanny talent, but debilitating nerves. As Justin prepares for the most pivotal moment in his budding career, Terry’s ailing health threatens to end his own. Charming and nostalgic, Alan Hicks’ melodic debut celebrates an iconic musician while introducing an emerging star of equal vibrancy. It is a mentoring tale as inspirational as its subjects.

The 2013 Tribeca Online Festival winners were voted on by visitors to tribecafilm.com.

Screenings of all winning films will take place throughout the final day of the Festival, Sunday, April 27, at various venues and times.