Should we have expected anything less than an entertaining evening of untold stories and original insights from the likes of Mr. Ron Howard? Here are a few of our favorite moments from Howard's conversation with Brian Williams. 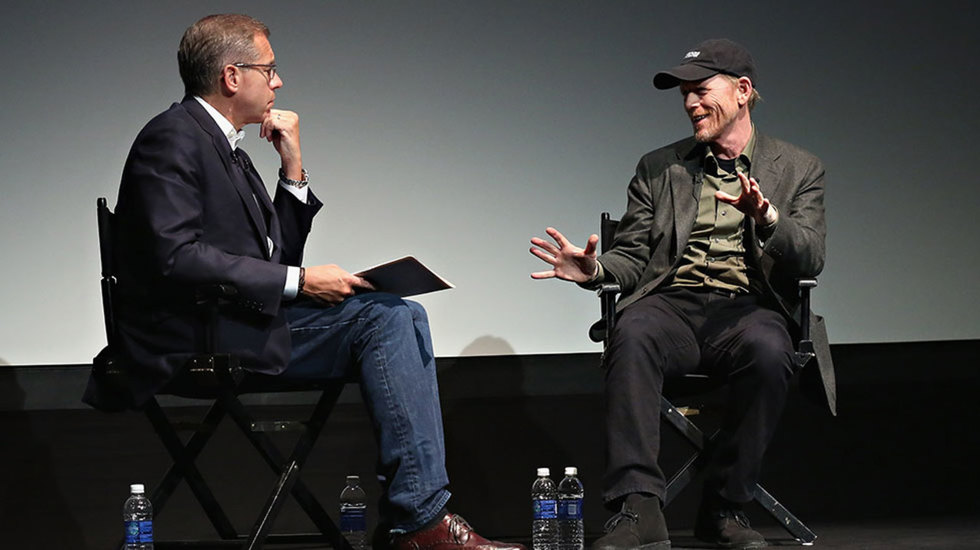 Tribeca audiences were in for a real treat Saturday afternoon, with Brian Williams conducting a Tribeca Talks®: Directors Series conversation with Ron Howard at the Borough of Manhattan Community College. The wide-ranging discussion touched on a number of topics, with Howard displaying a charismatic flair for telling anecdotes and articulating his positions on the film industry throughout. Below are some of the most fascinating takeaways from the conversation.

1. Howard is ready for cinema to change.

"The theatrical experience is becoming a lot more like Broadway," Howard explained early on in the talk. "The theaters themselves are getting bigger and better, but character-driven stories are going to play out more often in other forums than movie theaters." Howard seemed accepting of this reality of the film industry, stating that the industry is simply going through a change, and filmmakers will have to adapt.

"It's tough to even call them films," Howard said, acknowledging the industry's shift to digital. "I think it's wrong to think of what I'm in as the movie business. It's the moving image business. I think it's necessary to work in all different mediums." Howard explained that he views himself primarily as a storyteller. "If I come up with an idea, it's my job to determine what the right forum is for it - it might be a movie, but it might work better on the internet, with little three-minute segments."

"Let me tell you - the great ones always work a little bit harder than everyone else."

3. It's ultimately not up to the practitioners to decide how the industry changes.

Howard pointed out that ultimately filmmakers have to listen to the demands of the times. "The audience is always going to tell you what they want," Howard said. "You have to be willing to adjust to that. I understand resistance to day-and-date releases, but the truth is that the audience clearly wants to have the option to view different stories in different ways."

4. He would consider acting again.

Howard explained that the reason he cut back on acting years ago is because he was raising a family with his wife, who asked him to stop dabbling via acting in other people's projects (on top of directing his own projects) so that he might have more time to spend with his family. "But now we're empty nesters," Howard explained of him and his wife. "She can't wait to get me out of the house!"

5. The greats all work the hardest.

Howard spoke at some length about his time spent working with John Wayne on The Shootist. He said that he ran lines with Wayne - which Wayne told Howard no one had ever asked to do with him before - and he noticed that Wayne worked extremely hard to find out how to insert his trademark pauses and John Wayne-style hitches into his conversational syntax - it wasn't just an accidental affectation. "I've worked with John Wayne, with Henry Fonda, with Jimmy Stewart, with Bette Davis," Howard said. "Let me tell you - the great ones always work a little bit harder than everyone else."

6. He got an early start on making script revisions.

The first script note Howard gave that made an impact was given when he was six years old on the Andy Griffith Show. Howard had a line to say while entering a drugstore, but he told the director that a kid wouldn't say the line in that fashion. He suggested a different way to deliver the line, and the director had the line changed. Howard said he was beaming after his note was accepted!

7. But Andy Griffith cut him down to size pretty quickly right after.

With young Ron beaming about his note being accepted, Andy Griffith turned to Howard and said, "What you smilin' so much about there, young'n?" When Howard responded that he was so glad because he had just given his first note that was accepted by the director, Griffith responded, "That's because it's the first time you gave us a suggestion that was any damn good!"

Howard's mother, the actress Jean Speegle Howard, played Jim Lovell's mother in Apollo 13, a not insignificant role. When Howard's father first suggested his mother for the part, Howard was unsure about casting her, since the role was so important and Howard felt that he had a lot riding on the film. However, he came over to his parents' house and read one of the character's scenes with his mother, and her performance made him cry! Naturally, she got the part.