The Best of TFF 2014 in Photos, Videos, Quotes, Recaps & Podcasts

Miss any of our recaps, videos, fashion roundups, party photos, or podcasts? We had the ultimate access, and the best of our TFF 2014 coverage is right here! 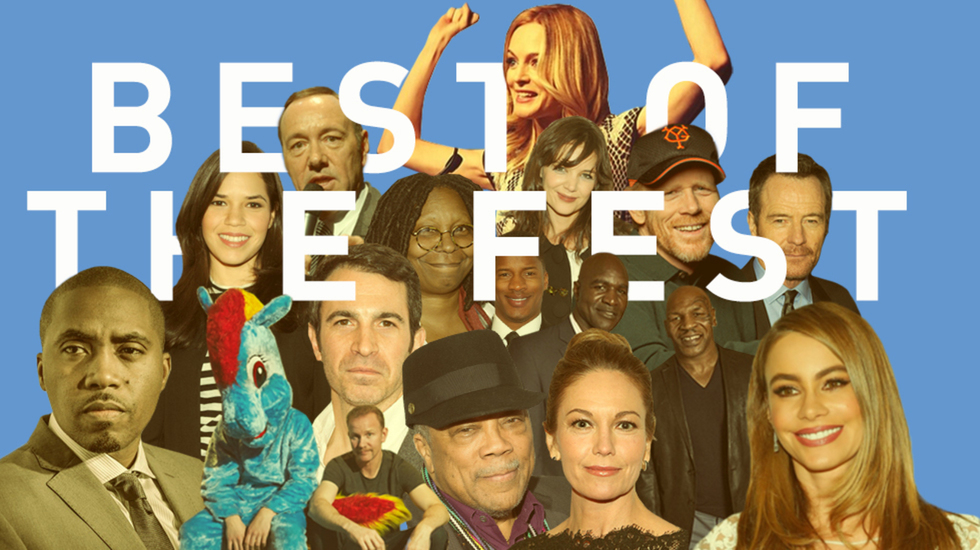 From the Opening Night premiere of Time is Illmatic and Nas' incredible performance to chatting with Aaron Sorkin, Bryan Cranston, Kevin Spacey, Thelma Schoonmaker, Ron Howard, Mike Tyson, Evander Holyfield and more, to analyzing Bitcoin, posing with Bronies, and celebrating at the after parties - we covered it all on TribecaFilm.com.

This year's events at TFF 2014 were arguably as vital to the Festival experience as the screenings. In case you missed any of it, we curated all of our event coverage into one handy list. (Click the links to go to full recaps and podcasts.)

The theater has been supposedly dying for centuries - that's what some have said - and yet it keeps limping along.

"With Breaking Bad, our creator, Vince Gilligan, said that he wanted to write a show about change. Historically television was about stasis; he wanted to see if he could go from a good character to a bad one."

The theaters themselves are getting bigger and better, but character-driven stories are going to play out more often in other forums than movie theaters.

If you're going to make a band, Clark told me you have to have the best people around you, and the right people. I tried to keep that with me during the film.

- Director Alan Hicks, 10 Great Quotes from the Keep On Keepin' On Premiere

"That [Super Bowl] ring is a lot shinier than an Oscar."

- Victor Cruz, The Best Moments from the We Could Be King Premiere

When Hollywood is armed with data about what they should make, they produce derivative, second-rate [work]... Let writers tell the story they think ought to be told and maybe it will be different than the last hundred stories.

"I think the only important thing is are you telling a story. You can shoot a movie on your iPhone and make the greatest movie ever made."

Ten years ago, if you asked me where I’d be now, I’d have said F-ing dead. But I’m not dead. I have an awesome life. And I’m just very grateful. That’s the one thing I try to convey. Gratitude.

"Working for Martin Scorsese is the best job in the world."

Once upon a time, a documentary was a film you saw in a movie theater, a news report was something you watched on 60 Minutes. Now all of these things are happening in the same place, and these labels and formats matter less than they ever have. The content isn't being described by the shape of the container anymore.

- Upworthy co-founder Eli Pariser, Panel Recap: All the News that Fits to Shoot, Print... Or Tweet

"It's guilt by association. The fame of a famous person melts onto the other not-so-famous person when seen together."

- Shep Gordon, 5 Lessons Shep Gordon Taught Us About the Industry at the Supermensch Premiere and Talk

I would ask people, what about [marriage equality] bothers you? The answers were so ridiculous, and that's why we've made such progress.

- Cazzie Russell, Knicks Forward 1966-71, on the scene in Madison Square Garden when an injured Willis Reed limped out of the tunnel just before Game 7 of the 1970 NBA Finals, The 10 Best Quotes from When the Garden Was Eden Gala Premiere

I think the biggest challenge for me was to kind of get over this idea that I was the youngest person on set.

"Open-source code," Shrem explained, "means that everyone can be involved in the growth of Bitcoin, together." In other words, there are no secrets about the way Bitcoin is constructed or how it is used."

[If you’re NBC] ...And you’re asking for a 22-episode season, that’s asking for somebody’s blood. Maybe you’re promising more money but the talented filmmakers and creators of television are going to go to Netflix and pay services and Xbox and whatever distribution platform exist in that new moment. I’m sure Apple will be funding their own shows soon.

"I wanted the option of having a terrific dynamic that you can get when the audience knows more than the characters do."

Read the full recap from our Future of Film conversation with Aaron Sorkin and Obama's speech-writer Jon Favreau.

From the minute we have an idea, we’re already thinking about where this can go. You can’t just come up with an idea and then just ‘take it out.’ You have to have a vision about where you want this to live in reality…physically and financially.

Nas performing his hit “One Love.” Check out all of the amazing photos from our incredible Opening Night screening of Time is Illmatic and Nas concert.

The gift of this film is that it gives kids from my neighborhood, who go through what I went through, hope. If he did it, I can do it. The little dudes from around my way or little women from around my way, I want them to know they can survive regardless.

To celebrate our Tribeca Interactive & Interlude: A Music Film Challenge in collaboration with The Lincoln Motor Company via Genero.tv, Damon Albarn and some very special guests performed at the Highline Ballroom. See all the photos from the night here.

The beautiful on and off-screen couple Ryan Piers Williams and America Ferrera after the premiere of X/Y sponsored by Heineken®, at Parlor. See Empire State of Mind: TFF 2014 After Parties for the rest of the highlights from TFF 2014 nightlife.

There's always been a battle between art and commerce, and art is getting its ass kicked.

Read the full recap of the Future of Film conversation with Sorkin and Obama's speech-writer Jon Favreau.

Zombeavers stars Lexi Atkins and Courtney Palm with director Jordan Rubin at the red carpet premiere of the one of the most talked about films of the Festival. Check out the full fashion red carpet recap, TFF Fashion: It's All About Black and White, from Emma Pearse.

Ah, New York fashion - there's nothing quite like it. Part of TFF is our annual Who's in Line series where we ask TFF filmgoers their NYC tale and what their fashion inspiration is that evening. Here's comedienne Anna Roisman from Who's in Line at TFF 2014: We Could Be King & The Other One: The Long, Strange Trip of Bob Weir. Check out the rest here.

We saw some high profile fashion while waiting for Time Is Illmatic. See who else showed up in Who's in Line at TFF 2014: Time is Illmatic.

Your eyes do not deceive you. Yes, that is a Brony sitting with filmmaker Morgan Spurlock. Only in New York. See Who's in Line at TFF 2014: A Brony Tale for the rest of the excitement.

If there was a director to direct the movie of your life, who would it be?

Ben Sinclair interviews New Yorkers for Video: Man on the Street With Ben Sinclair: Union Square (Plus check in on Monday for another episode!)