The subject of Mike Myers' comedic documentary, Shep Gordon, sat down with Michael Douglas after the premiere to compare notes about living life in the fast lane. 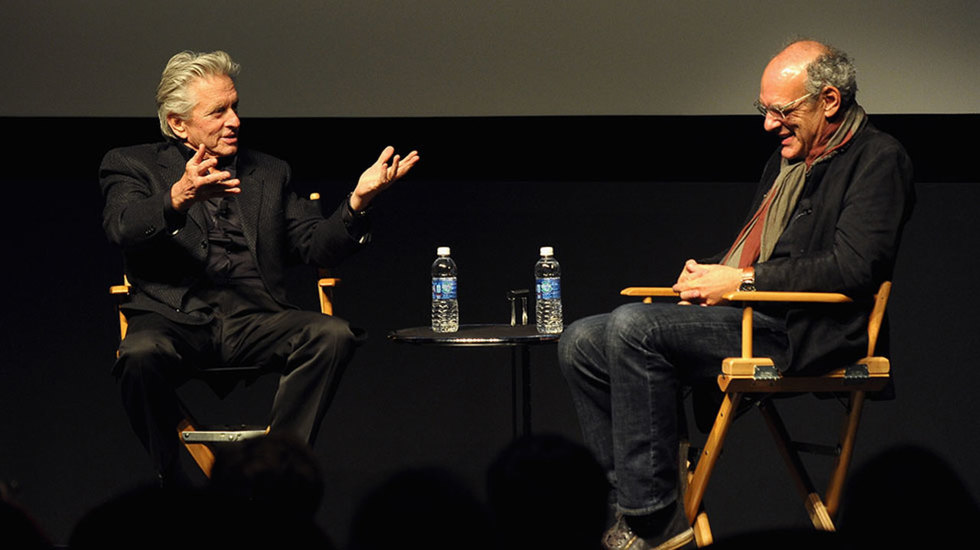 In case you missed it, on Saturday afternoon Mike Myers' directorial debut, Supermensch: The Legend of Shep Gordon premiered at the SVA Theater. The documentary focuses on its fascinating (and hilarious) subject, Shep Gordon, one of the most prominent behind the scenes figures in the entertainment industry - ever.

Partying with Jimi Hendrix and Janis Joplin, doing (a lot of) LSD with longtime client Alice Cooper, starting an independent film company, sweeping Sharon Stone off her feet, and even making chef Emeril Lagasse into celebrity chef Emeril Lagasse - Myers' film captures the fact that as a Hollywood manager, Shep Gordon has truly done it all.

After the movie, producer Michael Douglas and Shep Gordon sat down to share even more about where the industry can take you, how loyalty and good karma pay off, and just what it means to be a mensch.

Here are 5 lessons we learned from the talk about working in entertainment:

5. Where your career starts is NOT where it has to end.

Gordon began his career at just 21 years old in Hollywood and became a band manager off the advice of none other than Jimi Hendrix. He began managing various bands and focused heavily on one artist in particular, Alice Cooper. Through his connections he ended up founding an independent film company with Carolyn Pfeiffer. He decided one day he wanted to turn world renowned chefs like Emeril into celebrity chefs with brand marketing techniques throughout their cooking shows. Phew! Bottom line from Shep - be diverse, put yourself out there, and don't take no for an answer if something interests you.

I had a professor who talked about how the common thread of success in entertainment was rebellion against parents.

4. Alice Cooper used to be a track star and the famous chicken was a pawn.

According to Gordon, Alice Cooper used to be quite the athlete, holding the Arizona State marathon record. Being in the sports spotlight gave Alice the confidence to make theatrical productions of his concerts. During the famous chicken incident, it was Gordon who released the bird on stage and had Cooper, who was completely unaware of Gordon's plan up to that point, throw it into the audience. "I had a professor who talked about how the common thread of success in entertainment was rebellion against parents."  The next day, Cooper's career skyrocketed all thanks to a dead chicken, a lot of angry parents, and the power of shock factor.

It's guilt by association. The fame of a famous person melts onto the other not-so-famous person when seen together.

3. Being called a "mensch" is one of the highest compliments one can receive.

"My dad was a mensch," Gordon proudly stated. He went on to explain for any of the New Yorkers in the audience who weren't already aware that "mensch" is a Yiddish term for a person of integrity and honor. A mensch puts others happiness before his own and is fiercely loyal to his friends and family. The film touches upon Gordon's spirituality but one interweaving theme throughout was how dedicated he was to his clients, many of which became family.

When trying to boost the career of the wholesome Canadian folk singer Anne Murray, Gordon was having some trouble getting her name out. Cooper used to have a drinking club that included John Lennon. Gordon invited the drinking club to one of Murray's first shows, pushed her into the rock n' roll stars after the show, had a picture taken, sent it to the press, and Murray's career took off faster than she could have imagined. Gordon just shrugged, "It's guilt by association. The fame of a famous person melts onto the other not-so-famous person when seen together."

1. Don't put your own happiness on the back burner.

After nearly fatal emergency surgery, Gordon reflected on his roller coaster life. Thoughout the film and the talk, Gordon shared how badly he wants a baby and a family of his own. "I felt like I was living in other people's happiness," he confessed. So he retired. Alice Cooper remains Gordon's only client.