What if House of Cards’ Frank Underwood appeared on a panel at the Tribeca Film Festival with his wife Claire? What if the other panelists were Omar Little and Stringer Bell from The Wire? Just imagine the lively exchanges. 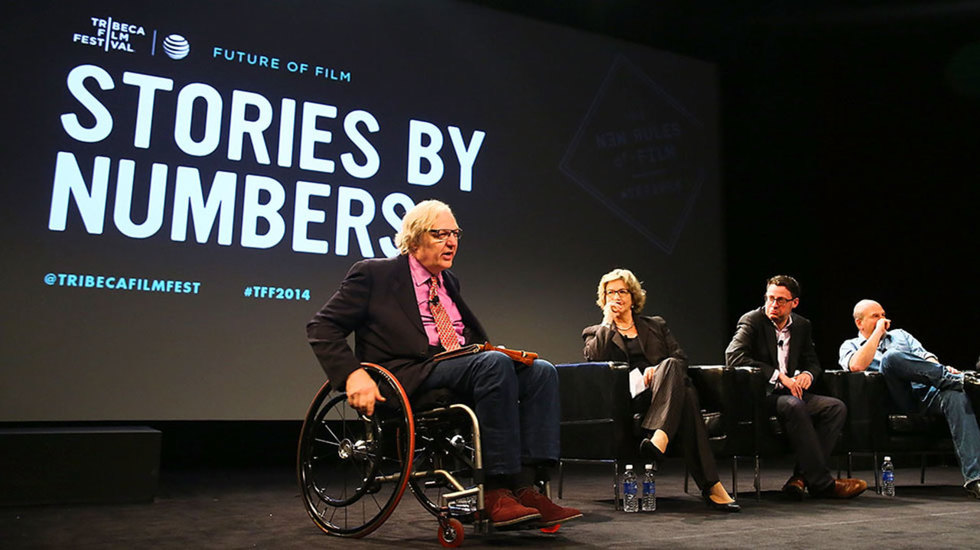 Yesterday afternoon, the creators of those two beloved shows, Beau Willimon of Cards and David Simon of The Wire, joined FiveThirtyEight editor-in-chief Nate Silver and veteran film journalist Anne Thompson to discuss the topic “Stories By Numbers” in front of a full crowd at downtown Manhattan’s School of Visual Arts.

The event might not have reached the high drama of a verbal sparring match between Francis and Omar, nonetheless, it sparked a spirited discussion on the role that audience data and feedback should have on storytelling.

"I don't know how many people watch House of Cards, I don’t know what times of day they watch it. I don’t know if they stop to watch the screwing scenes or not."

Here are the eleven most intriguing thoughts from the panelists during the conversation, moderated by WNYC’s John Hockenberry.

1. Beau Willimon doesn’t have access to House of Cards viewer data — which is the way he likes it

How many people watch House of Cards? Which episode is the most watched? Netflix executives know. But the show’s creator and showrunner, Beau Willimon, has no clue. "I don't know how many people watch House of Cards, I don’t know what times of day they watch it. I don’t know if they stop to watch the screwing scenes or not,” Willimon said. “Netflix closely guards that data for a whole host of reasons, and I'm glad that they do. I wouldn’t want it. That sort of data leads to pandering, which is the antithesis of creativity."

2. Willimon reads the Netflix viewer comments, but not because he’s a masochist

Willimon admits to logging into Netflix to check out the audience reviews, in particular, those amateur Eberts who give the show one or two stars. “It’s not a form of self punishment,” said Willimon. “I’m looking to see what are the things that people who don’t like this show consistently bring up.” He can then decide if it’s a matter of taste (and let it go) or the critique has merit (and make a change). “I think that immediate feedback, which you didn’t have ten years ago, can be an asset or a liability. I find it intriguing.”

(Kelly Kingman, Graphic Reporter, took visual notes at this panel. Stay tuned for a post on her full Stories By Numbers Visual Note!)

“I guess I used instinct when I got off the subway at 28th street and had to figure out what exit was going to get me here the fastest,” said Silver. “But instinct is really a cumulated experience. I think when I am writing stories I have an instinct about what’s real in the data and what’s not.”

4. Don’t pander to Twilighters, Twihards or really any vampire-obsessed fans
Anne Thompson, editor of the Thompson on Hollywood blog at Indiewire, talked about writing two stories about Robert Pattinson at Cannes which caused her site’s traffic to spike. But she was cautious about satisfying one demographic at the risk of alienating her regular followers. “Traffic is very important. But if I over do it and if I pander and I put something up [on the site] just because the Twilight crowd is going to like it, I’ll get punished. The readers will be pissed off.”

“I think a lot of bad writing focuses on causality. It’s this Freudian psychoanalytical bullshit. What is the A that led to the B. But, more than not, we do things for reasons we can’t explain."

Creator of The Wire, David Simon.

Although The Wire is considered one of the ultimate binge-watching pleasures in television history (even Willimon copped to watching three seasons in a week and a half), Simon said the Baltimore crime drama wouldn’t have survived its five-year run today, not if it pulled in the same ratings it did back then. “I’m not sure if The Wire could survive now. The stakes are higher for HBO. They will be the first to tell you, ‘we only have [so many] hours to program for drama so David Simon’s show can’t be sucking wind,’ even if critics say it’s worth watching.” With that said, the former Baltimore Sun reporter bristled at the notion of letting viewers inform the creative process. “You bring a world on. You feel responsible to the character, and you can’t look over your shoulder and say the audience wants more Omar, more Stringer.”

6. Anton Chekhov would have a hard time writing for TV these days.

Willimon appreciates that Chekhov’s characters didn’t always act in ways that made sense or forwarded the plot. “That’s life. Sometimes somebody walks into a room and makes a strange sound and walks out. Or sometimes a pigeon shits on your face.” Willimon added that storytelling is often infected with the need to make a direct correlation between events. “I think a lot of bad writing focuses on causality. It’s this Freudian psychoanalytical bullshit. What is the A that led to the B. But, more than not, we do things for reasons we can’t explain. Or that don’t have an identifiable point of origin.”

7. Willimon learned the power of narrative as a staffer for Howard Dean.

In 2004, presidential hopeful Howard Dean unleashed a “scream" that ultimately torpedoed his campaign. To this day, people ask Willimon, a former Dean campaign aide, about the doomed rally in Des Moines, Iowa, which he helped set up. “Campaigns live and die on good stories or bad stories. And there was this prevailing narrative [related to the question of] is this guy presidential or is he a loose cannon. Then the perfect moment happened that encapsulated the loose cannon. It fossilized the narrative. If it hadn’t been that, it would have been something else.”

Willimon asked an intriguing question of Silver, which was if the famed number cruncher felt that because his predictions had such widespread influence, he was actually using those predictions to “write a script for the future.” Silver responded with a story about the release of a poll during the 2012 Republican primary that had Rick Santorum surging. “It was probably just a bad poll – it was a small sample size – but all of a sudden these journalist started writing about how Santorum has momentum and it became self-fulfilling.”

9. Silver gets spammed by Democrats and Republicans.

“Every party sends me emails now,” Silver explained “They spam me. EMILY’s List sends something out like ‘prove Nate Silver wrong’ and the RNC sends one out that says ‘Nate Silver shows why we are going to win.’ That’s a little frightening.”

10. Getting a “two season deal” from Netflix liberated Willimon as a writer.

By ordering two full seasons of House of Cards out of the box rather than just producing one pilot episode, Netflix did more than disrupt the industry model, they opened a lot of creative doors for the show’s writers, said Willimon. "We did get a two season deal and that really affected the writing. Knowing that you could lay a tiny little grace note in the first episode and it might not boomerang back until 26 hours later, that really liberates you." The other nice thing about a guaranteed two-year contract? “I didn’t feel like I was fighting for my life. With my friends in network television, you’re only as good as your last week’s ratings.”

Simon argued that “When Hollywood is armed with data about what they should make, they produce derivative, second-rate [work].” He added, “There’s a formula. ‘He’s an anti-hero. He’s on the outside of society. He’s doing wrong but he has a family. Maybe he talks to a shrink, maybe he doesn’t talk to a shrink. He’s torn up about his life. He’s got this issue.’ Shit. They just keep watching The Sopranos over and over. They think, catch that fire in a bottle. But it’s like cloning. It gets weaker with every generation. Let writers tell the story they think ought to be told and maybe it will be different than the last hundred stories.”