Meryl Streep is a jack-of-all-trades when it comes to performing, but her look of concern is especially tough to top. From awkward middle-aged sexual discovery to sharing a dark secret, here are Meryl's top 5 moments of serious doubt. 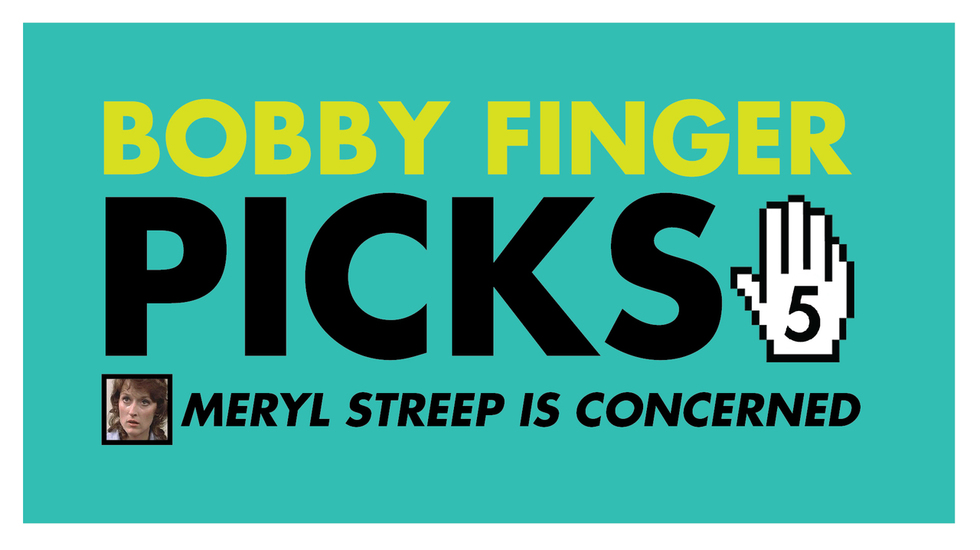 I’m no Hollywood executive, but I figure that it must be very easy to sell a movie that stars Meryl Streep. All you need is any movie and, well, Meryl Streep, and suddenly people are in the seats, salivating. Much like Breakfast at Tiffany’s was for that one couple that may or may not still be together, she’s the one thing we, as a society, got. So yes. Everyone loves her--that much is clear--but there must have been a focus group done long, long ago that said we love her most when she’s concerned about something. Anything! Because concern is the emotion trailers for her movies always manage to throw in, and boy is she good at it. You haven’t seen concern until you’ve seen it on Meryl, and here are the five times she wore it best.

It would not surprise me if Mike Nichols had wanted to change the name of this biopic to Concern because that’s basically what we’re dealing with throughout its runtime. From Kurt/Meryl/Cher’s weird living arrangement to, you know, the real Silkwood’s mysterious death, the movie is filled with things that concern me. Cue Meryl’s a cappella recording of “Amazing Grace.”

2. Oh my god I’m supposed to put that WHERE?

3. Oh my god I have to REVEAL MY TORTURED PAST?

Meryl had plenty to be concerned about in this one. I mean, come on! Sophie’s Choice! The title alone evokes the face of the world’s most concerned person. But despite all that the movie’s remembered for, its most impressive aspect was Meryl’s accent, which perfectly captures those distinct, subtle nuances of Polish concern.

4. Oh my god MY ONE TRUE LOVE IS DYING AND I HAVE A PARTY TO PLAN?

“I seem to be unraveling,” is one of my favorite lines of Merylogue, and it’s spoken at one of her character’s most concerned moments. One of her dying ex-lover’s other ex lover barges into her home just as she’s trying to prepare “the crab thing,” and meanwhile the dying ex-lover has suggested that, for whatever reason, he may not even come! To his own party! With nice flowers and everything! Wouldn’t you be concerned? Wouldn’t you fall to the floor of your perfect kitchen?

(If the clip doesn't work, click here to watch.)

(Bobby Finger's Tumblr was named the Village Voice's Best Blog of 2012. You should follow it. - The Editors)