Sometimes a creepy, chilling score makes a horror flick that much scarier. Bobby Finger goes through the list of which themes he thinks are the most terrifying. 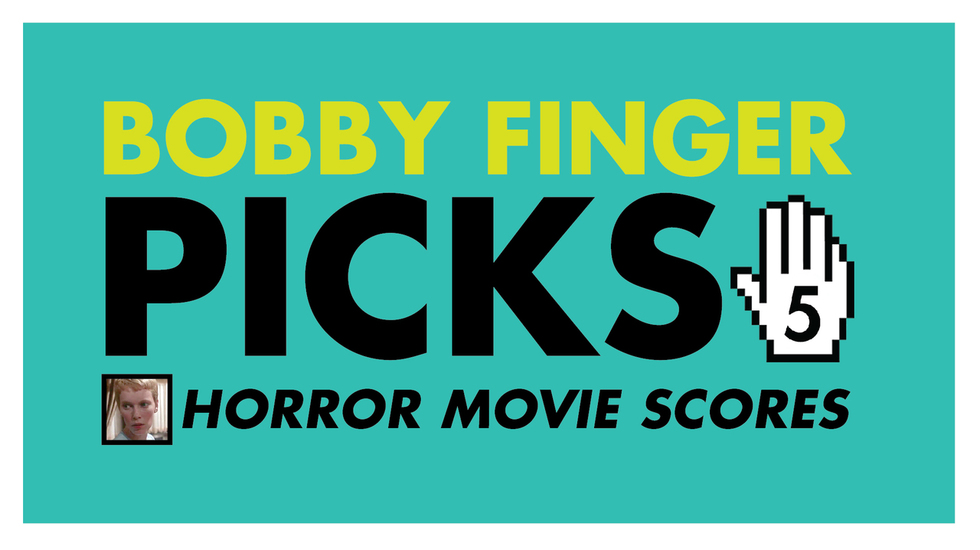 There are horror movies and series whose simple, repetitive themes are not only synonymous with the genre, but with fear itself. The bulk of Halloween's score is six notes, but the three before the key change will provide more than enough goosebumps. Jaws? Three notes'll do you there, too. The Twilight Zone? Another three! Simplicity works when it comes to horror. Simplicity is unsettling. It's atypical. What's filling the void where more notes should be? Probably something that's up to no good.

But sometimes it's not enough. Sometimes a lush, classically cinematic score is what a horror movie calls for. And sometimes it's just as frightening as three scary little notes.

Philip Glass is a master of minimalism. Though he often repeats himself –The Fog of War, The Thin Blue Line, The Hours, and Notes on a Scandal are almost identical – each original theme (regardless of how many movies it's used in) is a memorable piece of work. His score to the endlessly creepy Candyman is no exception. It's structured much like the ritual for summoning the Candyman. A few uneasy moments of repeating his name in the mirror with some quiet, music box-y piano, and then, suddenly, he appears - complete with a choir and pipe organ.

Maurice Jarre’s most famous themes are arguably from the scores of Lawrence of Arabia and Dr. Zhivago (though I’m partial to his adaptation of “Unchained Melody” for Ghost), but he’s also responsible for the underrated-ish psychological horror movie Jacob’s Ladder. It’s grand and unnerving - complete with choral “ahhhs” and “oooohs.” I’d say it would make a great opera, but I know nothing about opera. So!

The Omen is not a scary movie. The Omen is a very bad and ridiculous movie. But! Jerry Goldsmith’s score does an excellent job of convincing you that this weird kid with a weird head of hair is actually the antichrist. Oh, is that a choir of baritones chanting “Sanguis bibimus”? Must be satan.

Horror movies that involve children tend to have scores that mix typically frightening music with pleasant piano melodies. (See: The Omen and Carrie - also scored by Pino Donaggi - among others) And because we know to expect the worst, those quaint little moments of ivory tickling feel terribly ominous. Don’t Look Now may have been the first instance of this. It also may have been the first instance of unsimulated sex, but that’s for another list.

I like imagining Mia la-la-la-ing Ronan to sleep with this one. More terrifying than the movie.