The two icons kicked off the first-ever Tribeca Tune In with a sneak preview of their hit Netflix sitcom. 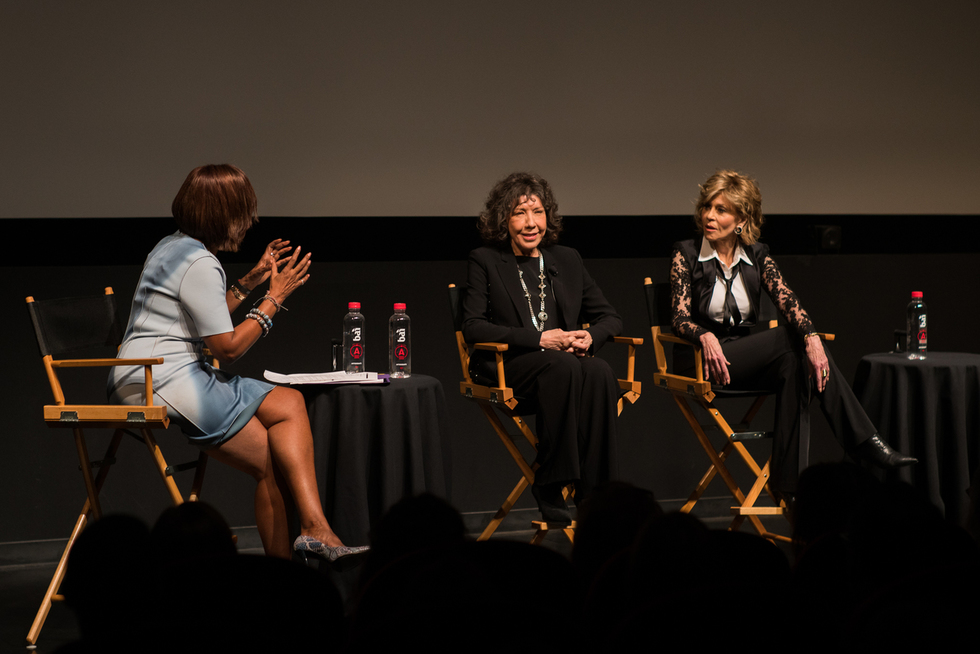 When it comes to the #SquadGoals over-saturation of best celebrity friendships, you can gladly keep your Taylor Swift and Gigi Hagid and Selena Gomez, and even your Amy Schumer and Jennifer Lawrence. No, the real celeb friendship we should all aspire to is the one between enduring entertainment queens Jane Fonda and Lily Tomlin.

This incomparable duo kicked off the inaugural Tribeca Tune In program with the first two episodes from the second season of their Netflix comedy Grace and Frankie, a series they had so much faith in that they joined the project without an actual script. The screening was bookended with an emotional introduction from executive producer, and Tribeca's very own, Paula Weinstein and a riotous panel with Fonda and Tomlin. Their conversation spanned a wide array of topics, from aging in Hollywood and the equal pay battle to acting legacies and, um, deep vaginal orgasms. (More on that later…)

Throughout the conversation, moderated by CBS This Morning’s Gayle King, Fonda and Tomlin exuded the sort of carefree camaraderie, reflex drollery, and faux-rivalrous candor that has characterized their real-life, decades-long relationship, as well as their onscreen counterparts. As Tomlin put it early on, "We live the scripts." The comedy goddess let loose a glorious cackle while cracking a Barbarella joke within the first five minutes of the conversation, which Fonda responded to with a playful slap on the arm. Tomlin later made an explicit reference to Fonda's notorious ex-husband Ted Turner, summing up their widely reported marriage with a hilariously pithy, "She was so misguided," that would've surely made Dorothy Parker proud.

Things even got personal as Fonda talked about finding value in "kindness" with her current boyfriend, record producer Richard Perry, before voicing her deep admiration for Tomlin's 48-year relationship with personal and professional partner Jane Wagner. But the talk also covered the topics requisite for a discussion between two legendary feminist icons. Aging took immediate prominence, with the 78-year-old Fonda decisively demanding that all women, but especially women of fame and power, "just say how old [they] are."

Fonda continued to espouse her thoughts on the spurious stigmas of getting older: "When you're looking at it from the outside, it's terrifying. But when you're smack dab in the middle, it's not scary. In fact, it's better." This drew enthusiastic support from the predominantly female, mostly middle-aged audience at SVA, as well as the 76-year-old Tomlin, who caustically claimed that being on "the dark side of 70" has limited her love scenes on the show, if not Fonda's. This led to what can possibly be called a "spoiler," as the two hinted at the D.V.O.s (that would be the "deep vaginal orgasms") that are yet to come on Grace and Frankie.

Later on in the talk, King asked the two to clarify the equal pay kerfuffle that transpired when Fonda and Tomlin revealed, with indiscriminate jokiness, that their co-stars Martin Sheen ("a true politician," as Fonda called him) and Sam Waterston ("a true intellectual") were being paid the same amount as them, despite the show's title being Grace and Frankie. The pair set the record straight once and for all: The four co-stars are being paid the same amount. But they then noted, cheekily, that they are the only two that have a backend deal.

Fonda also officially gave Hillary Clinton her stamp of approval: "It's a long battle," she noted, "but personally I think Hillary will be president." She then noted that only the leading Democratic candidate has the "experience and background" to dismantle the "toxic masculinity" of a patriarchal country that's still criminalizing reproductive rights.

During the concluding audience Q&A, a young woman stood up and asked Fonda and Tomlin for advice on how to combat the "micro-aggressions" that one faces as a frustrated, fourth-wave feminist. Fonda took up the calm but compelling rallying cry that we've come to expect from this peerless pioneer. "We need to be surrounded as a movement," she urged, telling the audience member to surround herself with feminist women and men who are interested in pursuing "collective action," as Tomlin nodded in firm agreement.

Times may change and icons may age, but rigorous activism and impassioned empowerment never go out of style.