Home » Tribeca News » Women are the Future of Film: Tribeca and CHANEL Launch Third Annual THROUGH HER LENS
View All News

Women are the Future of Film: Tribeca and CHANEL Launch Third Annual THROUGH HER LENS

This is what the future of film looks like. Meet the women of Tribeca and CHANEL's third annual THROUGH HER LENS. 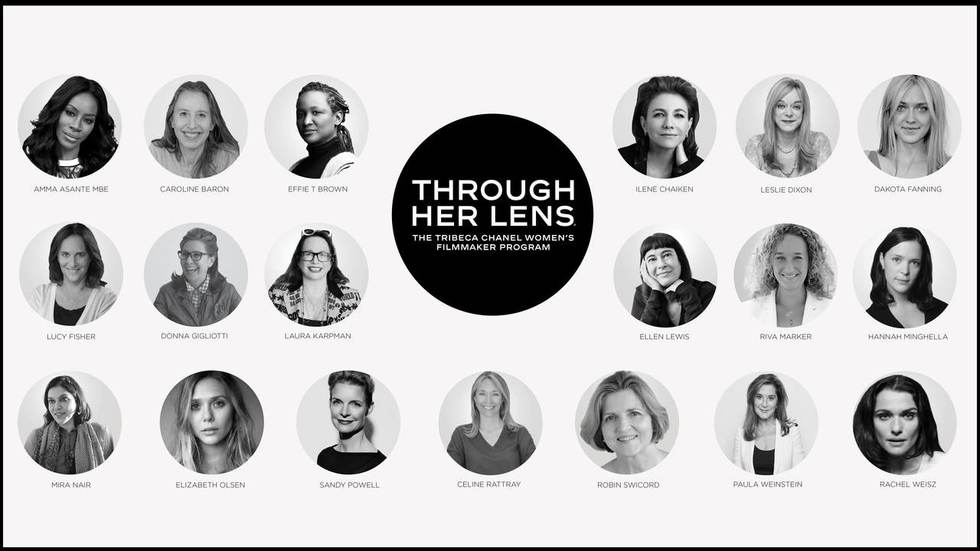 Continuing their commitment to creating new opportunities for a new generation of women filmmakers and writers, Tribeca Enterprises and CHANEL announced today the third annual THROUGH HER LENS: The Tribeca Chanel Women's Filmmaker Program. The program was created in 2015 to provide a balance of industry support, artistic development and funding for new and emerging, U.S.-based female writers and directors of short-form narrative films.

Presented by Tribeca and CHANEL, in collaboration with Pulse Films, and facilitated by Tribeca Film Institute (TFI), the multi-faceted program, has selected five emerging female filmmakers to receive project support, and take part in master classes, one-on-one mentorship, and peer-to-peer sessions. At the end of the program, each of the five filmmakers will pitch her project to a jury of industry experts. One filmmaker will be awarded full financing to produce her short film, along with support of Tribeca Studios to make the project, and the four other projects will each be awarded grant funds to continue the development of their films.

The filmmakers will convene for three days in New York City from October 17th to the 19th for an in-depth, intimate program concentrating on script-to-screen development, casting, finding collaborators, and working with music composers, costume designers, and producers. Selected participants, along with one female filmmaking partner each, will attend master classes and have individual mentoring sessions with leading women in filmmaking, meet distributors, and refine their pitching skills. During the summer, each filmmaker was given the opportunity to work with writing mentors to shape and refine her project.

“We created THROUGH HER LENS with CHANEL three years ago to support and nurture female artists through mentorship and funding,” said Paula Weinstein, EVP of Tribeca Enterprises. "Since then, we’ve built a community of incredible women storytellers who recognize how critical it is to discover and empower female filmmakers. We're excited to welcome this next generation of rising talent to the program.”

“We’re thrilled to give such a talented new class of filmmakers the opportunity to participate in THROUGH HER LENS,” said Amy Hobby, Executive Director of TFI. “The program, and advancing the careers of female filmmakers in general, is an important part of our year-round work elevating diverse storytellers in order to advance racial, gender and economic equity.”

The Leadership Committee participating in the program includes:

The selected projects and filmmakers are:

Venezuela could have been one of the richest countries in the modern world, but ineffective government policies and corruption have made the country one of the most dangerous places to live. Vuela (Fly) tells the story of a chance encounter between Luisa and Monica just before they take off to different countries and leave everything behind them, including the opportunity to get to know each other. Marianne Amelinckx is a Venezuelan writer/director whose passion for storytelling led her to write and direct Salta, a very personal short film that premiered at the Tribeca Film Festival in 2017. Vuela is the second short film of the trilogy: Salta, Vuela, Corre. She is also currently working on 39 bedrooms, a personal blog that might turn into her first feature film.

Sarah’s bachelorette party is all cigarettes and penis shots, until she and her best friend Marie get the call to report for active duty the next day. They’ve been training for years to be deployed by the US Navy, so they’ve got this, right? Nicole Emanuele’s short film Love, Gina (2017) played at Cinequest and Rooftop Film Festival and was featured on The Playlist. She produced Not Waving but Drowning (2012) with Adam Driver, Lilli Reinhart, Megan Guinan and Vanessa Ray and is currently a development executive at YouTube Red overseeing series and films including Step Up: High Water and Doug Liman’s Impulse.

NO FAULT by Myna Joseph (Writer/Director)

Following a near-fatal car accident, Lu wrestles with creeping invisibility as she approaches the second half of her life. On this long winter day, she finds her physical identity fractured, ignored, misunderstood, and judged – but with wry humor and stubborn resilience, she’s determined to be seen. Myna Joseph’s short film Man screened at Cannes in Directors’ Fortnight, Sundance, SXSW, and New Directors/New Films Festival. She was nominated for a 2016 Independent Spirit Award for Best First Screenplay for The Mend, which was also nominated for a Gotham Award. Myna attended the Sundance Directors’ and Screenwriters’ Labs with her feature Charlotte XVI and is a graduate of Wellesley College and Columbia University’s M.F.A film program.

Valentina, a day-walking Black vampire protected from the sun by her melanin, finds it difficult to suppress her bloodlust when a new woman is brought around her estranged twin daughters. Nikyatu Jusu is an award-winning Sierra Leonean-American filmmaker. Her screenplay Free the Town participated in the Sundance Institute’s inaugural Diverse Writers Workshop and was selected for both the 2013 Durban Film Mart and Film Independent’s Fast Track. Her short film Flowers won the HBO short film award and is her third film acquired by HBO.

Manny, an outcast and bullied high schooler, finds her only friend in music. When her teacher, Mr. Hornby, is possessed by a violent, alien insect, Manny is forced to fight her biggest demon yet and discover her magic within. Anna is an award-winning writer/director based in Los Angeles and an alumna of the USC Film & TV Production program. Her films and music videos have screened internationally at festivals including SXSW, Santa Barbara International Film Festival, Fantasia Int'l Film Festival, and Oberhausen Int’l Film Festival. She is a founding member of the Aporkalypse filmmaking collective.

This past year, CHANEL strengthened its initiatives to support female filmmakers with Tribeca when it became the presenting partner of the Nora Ephron Prize. Awarded during the annual Tribeca Film Festival, the prize was created in 2013 to honor exceptional female filmmakers who embody the spirit and vision of the legendary filmmaker. Women who have received the award include: Meera Menon (Equity, Farah Goes Bang), Talya Lavie (Zero Motivation), Laura Bispuri (Sworn Virgin) Rachel Tunnard (Adult Life Skills), and Petra Volpe (The Divine Order) from this past year.

The main recipient of last year’s THROUGH HER LENS grant, Feathers, directed by A.V. Rockwell, is currently in post-production. In 2015, the program’s inaugural year, the grant was awarded to Wig Shop, directed by Kat Coiro (L!fe Happens, And While We're Here); the short went on to debut at the 2016 Hamptons International Film Festival.

Tribeca actively cultivates independent voices in storytelling and has been at the forefront of supporting women filmmakers. THROUGH HER LENS: The Tribeca Chanel Women's Filmmaker Program — the most recent iteration of Tribeca’s commitment to championing the voices of women artists — continues to provide resources to help empower emerging women storytellers within the industry. The nonprofit affiliate of Tribeca, Tribeca Film Institute, supports women filmmakers through, among other initiatives, its cornerstone grant and mentorship program, Tribeca All Access. Currently in its fifteenth year, the program supports scripted, documentary, and interactive storytellers from diverse communities, including those that are statistically underrepresented in the industry.