Home » Tribeca News » Fantasizing the Feminine: A Look at the Female Archetypes in David Lynch’s BLUE VELVET
View All News

Fantasizing the Feminine: A Look at the Female Archetypes in David Lynch’s BLUE VELVET

On the anniversary of its world premiere, here's a reconsideration of one of the auteur's most pleasurably cryptic masterpieces. 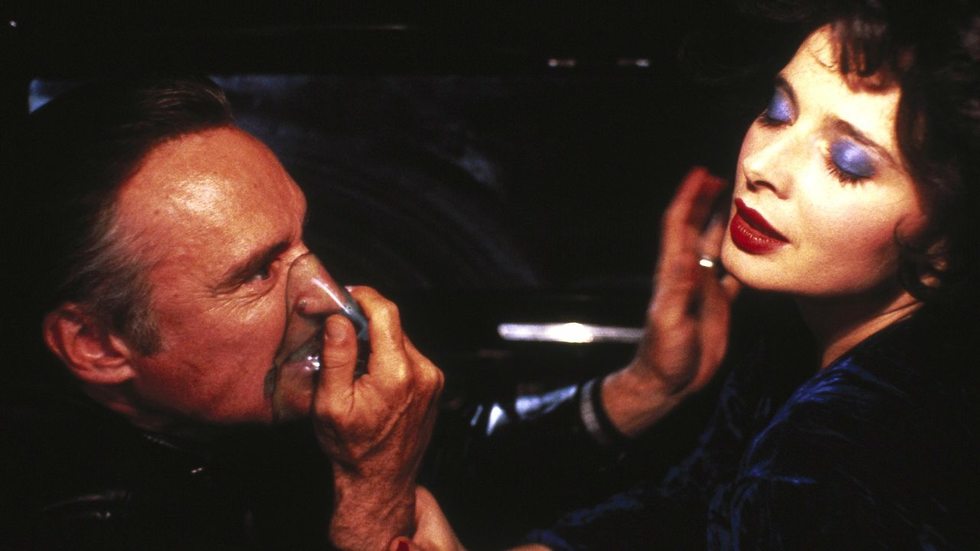 Like a nude and delusional Dorothy Vallens scaring the shit out of Jeffrey Beaumont as she reels and raves on his front lawn, the debut of David Lynch’s Blue Velvet in 1986 managed to galvanize an entire era of Reaganite moviegoers more accustomed to the superfluous sleekness and strutting machismo of Maverick and Iceman. By snatching Eisenhower-era Americana away from the nostalgia-minded and dousing the fondly-remembered iconography of that bygone time with a lethal dose of modern cynicism, Blue Velvet presents a suburban atmosphere disrupted by social outliers who reveal its eerie underbelly: a site of simultaneous pain and pleasure, snugness and savagery.

Existing within this transmogrifying environ are Blue Velvet’s chief female characters: the smoldering, smoky-eyed Dorothy Vallens and the sunny, golden-haired Sandy. In any other director’s film, they would firmly occupy the stock roles of Damsel in Distress and Girl Next Door, yet within the Lynchian cosmology of Blue Velvet, they continually defy and contort the established personas from which they were built. Blue Velvet deliberately warps American cinema’s preconceived notions of feminine roles, questioning these archetypes by initially embracing their fixed and familiar characteristics before quickly transgressing them.

In terms of conventional dramatic storytelling, Jeffrey Beaumont is by all means the protagonist of Blue Velvet. Troubled by the grisly discovery of a severed ear in an empty field in his sleepy town of Lumberton, the cute, collegiate Jeffrey decides to play detective and enlists the help of his neighbor Sandy to crack the case, ultimately journeying into a realm of ferocious fantasy whose seductive and sinister pull bears real-world consequences. Although Jeffrey is scripted by Lynch and performed by Kyle MacLachlan as a quintessential male hero, he is easily the film’s blandest creation, a grown and guileless boy scout coerced by perverse suburban curiosity into situations of real menace that lead him to sincerely, verbally wonder, “Why is there so much trouble in this world?” But this purposely vanilla depiction of a technically centralized male lead primarily serves as an entryway for Lynch to introduce Blue Velvet’s actual point of interest: Dorothy Vallens, the knife-swinging, torch song-singing enigma of the film.

On the surface, Dorothy Vallens is a Damsel in Dire Distress, a woman whose husband and young son are being held hostage at the hands of a homicidal maniac. But she is also something of a reframed femme fatale, one whose sexual involvement with Jeffrey eventually produces disastrous consequences. Lynch and Isabella Rossellini craft an instantly-recognizable figure in Dorothy, drawing upon the time-honored textures of those aforementioned archetypes to show us what is immediately enticing, both to Jeffrey and to us, about this siren, from her perfectly-coiffed bouffant and heavy, smokey-blue lids to her rouged lips and slinky black gowns. Rossellini, who, as Ingrid Bergman’s daughter, was endowed with classical beauty at birth, cuts a hypnotic figure as Dorothy, a nightclub chanteuse who sings old standards like the film’s title song with an unearthly detachment. Dorothy is immediately evocative of everything we have come to remember about glamorous, Golden Age temptresses like Lauren Bacall and Rita Hayworth, who played tough dames often in need of a Bogart or some other strong male figure to get them out of a bind.

Jeffrey, however, is certainly no Bogart. And Dorothy, for all of her surface similarities, is definitely no Bacall. Lynch and Rossellini quickly distort our view of the incongruous Dorothy, drawing upon certain stylistic accents (i.e. the removal of her wig as the breaking of a façade) and performance choices (i.e. the haunting, breathy detachment of her singing in what feel more like impersonations than performances) to help accentuate the bleak and tortured soul that exists at Dorothy’s core, beneath the enchanting exterior. But what really separates Dorothy, and what frequently defines her, is a desire for pain. Dorothy’s is a specifically sadomasochistic desire, one that she mainly achieves through Frank, the oxygen-huffing, dry-humping kidnapper burned into the brain by Dennis Hopper. Frank pays frequent visits to Dorothy’s grubby apartment to slap her around and thus enact his own violent desires, terrorizing Dorothy but also satisfying her own needs in the process. In one of the film’s most indelible shots, we see a close-up of Dorothy’s mouth snapping into an enraptured smile and bearing a chipped front tooth after being struck by Frank during his first on-screen visit. Jeffrey, too, ultimately comes to fulfill this desire for her, albeit hesitantly and seemingly by accident, when he becomes her lover.

Dorothy may be imperiled but she also holds unique sway over her tormentor, who needs her for gratification, as well as Jeffrey, her presumed savior. It is in keeping with Jeffrey’s sheltered life that he is unable to understand Dorothy’s candid desire, to an extent that it is ultimately Dorothy and not the overtly villainous Frank who becomes the greatest source of Jeffrey’s shock. Dorothy’s ever-present desire cannot be romanticized and remains troubling in Lynch’s open-ended handling, which famously alienated critics like Roger Ebert and Paul Attanasio, who cried exploitation of the most heartless order. Backlash was inevitable, but Lynch’s depiction of sadomasochism, rooted in a brazen disturbance of a recognizable cinematic archetype, actually seems to signal deeper meanings beyond the sheer exhibition of female brutality. The lack of a basis for Dorothy’s desire, which is in keeping with the obscurity of all of Lynch’s puzzlers, ultimately says less about her character than we might expect. But the ways in which she continually wriggles in and out of easy female victimhood effectively blurs the line between the often opposed concepts of suffering and satisfaction that are frequently determined by pre-assigned gender roles, especially in cinema. To portray Dorothy as a pure victim is to turn a blind eye to the frequency with which the character purposely exercises and relinquishes her agency throughout even the cruelest episodes of Blue Velvet, refusing shame even as Jeffrey recoils with disgust at her debasement before yielding to her pungent sexual power. Indeed, if any of the film's central characters are consumed by shame, it is the pseudo-chivalrous, clean-cut Jeffrey, whose inability to save Dorothy suggests a different kind of impotency, which his carnal relationship with her cannot eradicate.

If Dorothy is the deconstruction of desire then Sandy is the deconstruction of fantasy, particularly that of the Girl Next Door. If Dorothy occupies some weird middle ground on the Madonna-Whore continuum, then Sandy is all Madonna, a character who is the quintessence of suburban wholesomeness and represents the virtue to Dorothy’s vice, even though Sandy herself is hardly incurious. Although the character, as invested with rich interest and teenaged innocence by Laura Dern, Lynch’s greatest acting collaborator, is not nearly the fully-realized or fully-complicated creation that Dorothy is, Lynch still tinkers with the character through subtle cinematic details, starting with her introduction into the film, one that is unusually ominous in its basic set-up: a disembodied voice calling out to Jeffrey with a question about the ear, before finally emerging from the shadows, an earthbound angel making a ghost’s entrance.

Clad in cozy cardigans and pretty sundresses, Sandy stands in direct contrast to Dorothy as someone who represents the suburban ideal, which attracts Jeffrey even as he travels further into Dorothy’s forbidding domain. Sandy is a constant presence in Jeffrey’s mission, cautious of but not entirely repelled by his morbid curiosities. After all, it is Sandy who informs Jeffrey of Dorothy’s apartment in the first place, further piquing his interest and enabling his quest. When Dorothy’s depravity ultimately makes its way into Sandy’s very home, corrupting the suburban landscape that Sandy is part and parcel of, the awful encounter signals something larger about the dichotomies between the two worlds that these women inhabit and have come to characterize. For all of her inquisitiveness, Sandy represents the intrinsic boundaries of the Girl Next Door type. She only wants to love and be with Jeffrey and casts herself as his partner-in-sleuthing because it will hopefully pay some more personal dividends. Consequently, she is made distraught when Dorothy’s appearance into her world threatens this possibility, before forgiving Jeffrey without a single hitch. One cannot possibly imagine Sandy’s life goals being any more complex than marriage and motherhood, represented in the laconic figures of Sandy and Jeffrey’s own mothers, played by, respectively, Hope Lange and Priscilla Pointer. But Lynch does not necessarily criticize this simplicity so much as he uses it to expose the limitations of Lumberton’s suburban mentality through Sandy, who is Lumberton personified.

Then again, Sandy’s goals are perhaps not as wildly different from Dorothy’s as viewers might initially assume. After all, Blue Velvet memorably ends on the strangely sentimental, slow-motion shot of Dorothy playing with her returned son, experiencing a moment of utter bliss that is more richly emotional than any we have seen prior, which isn’t to say that motherhood has been absent from the film prior to this. It is this same son, after all, who Dorothy is desperate to regain. And theorists like Slavoj Zizek have worked themselves into a lather over the mommy-daddy-baby role-playing between Dorothy and Frank and the Oedipal insecurities these scenes unearth. Is motherhood, or more specifically maternal love, the blue key to Blue Velvet?

Such a question is almost besides the point. In a 2015 interview with the Criterion Collection for its release of Lynch’s mysterious, many-sided 2001 masterpiece Mulholland Dr., actor Justin Theroux criticized the deep readings of Lynch’s films that veer toward precise meanings, voicing a stance that Lynch himself continues to take: “I think people who are really trying to break it down… [are] going to end up frustrating [themselves] because there is not connective tissue between certain things. And that’s okay.” As in most of Blue Velvet, Lynch is not intent on confirming our interpretations or saying anything definitive about moments like Dorothy’s maternal reunion, a sight of simple beauty that is unexpected but not unprecedented within the scope of the story. Lynch lays his films bare with all their riddles and irresolutions, letting them linger in the collective consciousness until they gain a certain fruitful power from the sustained cageyness of their presentation. A film like Blue Velvet, which warps the feminine familiar in ways that upset and astonish, is not about sharing conclusive moral answers (or judgments) but about posing questions that upend conventional expectations in the most gloriously gonzo fashion imaginable, stringing us along and speaking obliquely to our deep-seated curiosities. Lynch turns all of his viewers into moviegoing Jeffreys, searching for deeper understandings of the things that intrigue and intimidate us. And like the best of Lynch's works, Blue Velvet upholds the notion that, in matters of cinema and life, the search should dazzle just as much as the solution.