Just in time for the holiday, this special early edition of Summer Fridays will provide you with plenty of activities for Independence Day and beyond. 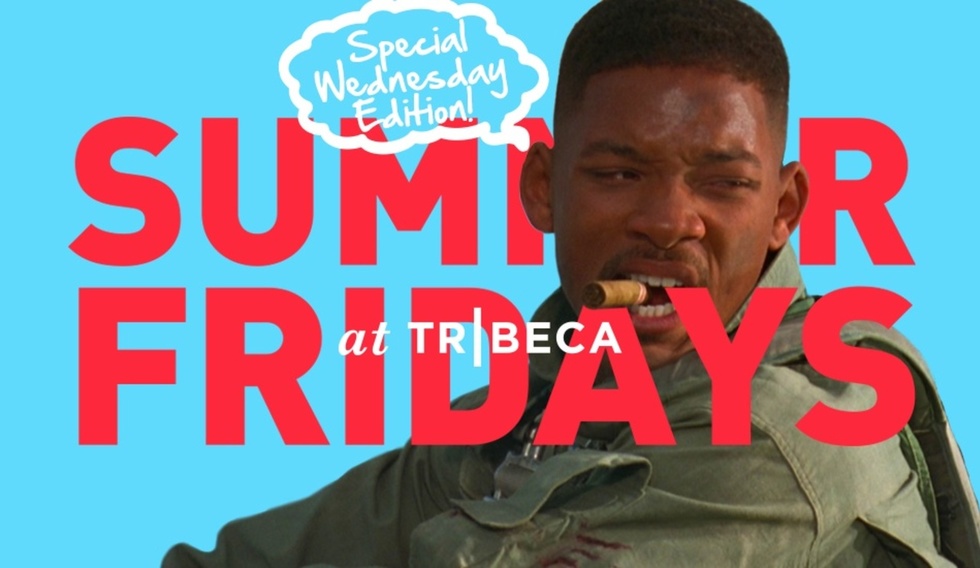 In search of events and screenings to attend on this upcoming four-day weekend? Let us help. In addition to Freddie’s special July 4th picks, we’re happy to offer up suggestions for the rest of your days off including block parties, comedy shows, film series and a battle for local ice cream supremacy.

In honor of the holiday, this week I am going to be changing things up a bit. Since most of you find yourselves with a four-day weekend (apologies if you don’t, didn’t mean to rub it in), I have scrapped the Free Pick Three this week to avoid inundating you with choices (there are a lot of options this weekend).  Here are some special July 4th events that will inspire your inner patriot.

After a 1 year, $30 million renovation, our world famous lady to the southwest is back and better than ever. What better way to celebrate our independence than with the national symbol of freedom and acceptance? You don’t have to be a tourist to love Lady Liberty.

Every New Yorker needs to see this at least once. It is equally mind-blowing, repulsive, inspirational, and depressing. The pre-show is always fun and gets you moving. Honestly, what is more American than stuffing your face with hot-dogs on the fourth of July…? Nothing? Exactly. Can Joey Chestnut do it again? What stunt will Kobayashi pull? The tension is in the air and the waistbands are ready to expand.

This original daytime holiday experience in dance and dine is about to celebrate the Fourth of July withtheir very first dance music marathon. On Thursday, July 4, 2013 from 3 pm to 4 am (that's right 13 hours!) at LP ‘n Harmony. Beats & BBQ will provide the Williamsburg, Brooklyn community with its wonderful combination of “Soulful Dance Music, BBQ and You”. With each beverage purchase, patrons are entitled to a plate of free bbq, expertly grilled by Li aka Black Mamba.

As always, please feel free to send recommendations or comments to freddietheintern@gmail.com.

If you like your vampire movies rough and gritty (with no sparkly skin), look no further than Near Dark. Starring Adrian Pasdar, Lance Henriksen, and Bill Paxton, Kathryn Bigelow’s second film follows a family of bloodsucking drifters as they hunt and wreak general havoc on humanity. When one of their youngest members turns a local boy into one of their ilk, they have to decided whether to take him in or cast him out.  The questions is whether he can learn to be as ruthless and bloodthirsty (literally!) as they are. Bonus: the film also features a baby-faced James LeGros in the infamous bar scene.

Indiana Jones and the Temple of Doom
Landmark Sunshine Cinema at 11:59 PM
Ticket: $10

The second installment in the Indiana Jones franchise features America’s favorite fictional archaeologist on the hunt for mystical stones in India. He soon stumbles upon an ancient cult (that uses enslaved children for labor!) with dastardly plans to take over the world. Indy and his faithful sidekick Short Round must save the day, with a little help (though there’s a lot of room for argument there) from Wille Scott, a beautiful (but shrill) nightclub singer from Shanghai.

Flight of the Butterflies
American Museum of Natural History
Ticket: $25 (includes admission to the museum)

It’s the last weekend to catch this film about the incredible 3,000-mile journey of Monarch butterflies at the IMAX at the American Museum of Natural History. Flight of the Butterfly is great for families, nature enthusiasts and people who love butterflies and want  to witness the longest and most amazing insect migration on Earth.

Like synth music? Well, you’ll be in heaven at NYC’s annual fair to celebrate the modular synthesizer. Part exposition, part block party, this event features synth makers and distributors as they share their creations by day, inviting audiences to see, hear, touch, and talk about the modular synth. In the evening, musicians will perform to help you dance the night away.

Like drag queens and bingo? We’ve found the perfect event for you. Join the hilarious Linda Simpson (New York’s one and only Bingo drag queen) for an evening of games, prizes and the mysterious “wheel of chance.” Plus, happy hour prices! Bingo cards are only $2 each.

NYC Celebration of Nations Festival
Madison Ave between 42nd and 57th at 10:00 AM
Ticket: FREE

Over 50 cultural and corporate displays will be on view along Madison Avenue for tourists, New Yorkers, and families to explore. With over 400 international food, art, craft, antique, and merchandise exhibitors, there’s truly something for everyone to enjoy at this multi-culture Festival.

Part of the New York Asian Film Festival, An Inaccurate Memoir centers around an anti-Japanese resistance fighter who infiltrates a gang of thieves to help them assassinate a Japanese prince due in town at any minute. An interesting mix of genres--western, black comedy and war movie--the film centers around vicious bandits who love to fight, but would rather chase women and drink heavily than help liberate China.

Want to eat ice cream all day long? 30 ice creams makers will compete  to see which local ice cream is judged the best. If the weather proves to be unbearable this weekend, an ice cream cool down might be just the ticket. Plus, you get a free cocktail with your ticket purchase!

The beloved NYAFF is back with its 12th edition. This year focuses on the Philippines with Manila Chronicles: The New Filipino Cinema and offers a lineup of Taiwanese “Black Movies from the 1980s.  There are plenty of other Asian films that will spark your interest.as well.