Feeling daunted as you try to make your weekend plans? Let us make things easy for you. 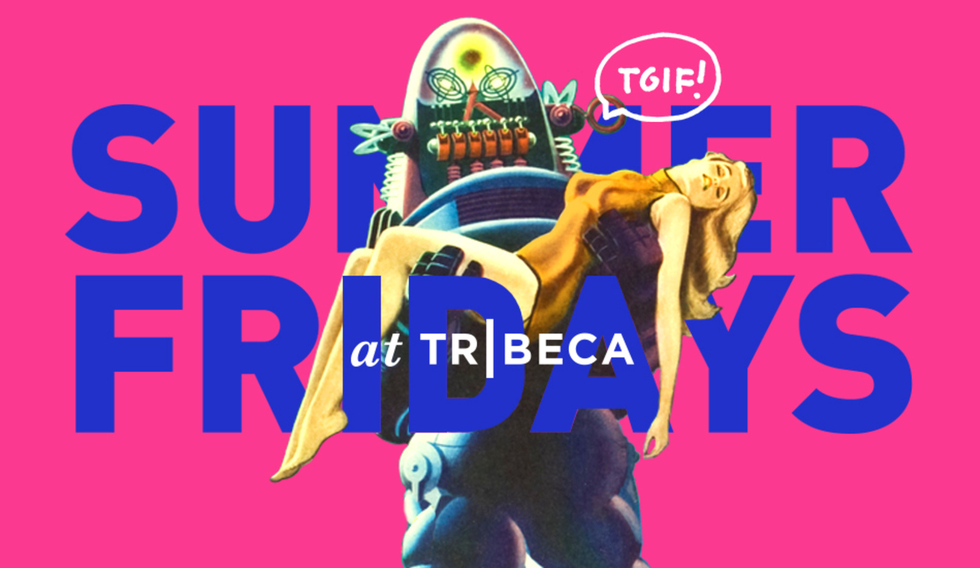 Our Summer Fridays feature narrows down a wide array of film and non-film related activities that have our stamp of approval as we head into the weekend. With a plethora of different film series, cult movies and the occasional oddity (Air Sex World Championship anyone?), you’re guaranteed a great time this weekend in the city that never sleeps. The best part? Thanks to our intern Freddie’s suggestions, you can  enjoy much of what NYC has to offer without spending a dime.

As one of the last remaining screenings in the Human Rights Watch Film Festival, Camp 14—Total Control Zone offers a fascinating portrait of a young man who grew up in a violent North Korean prison camp as the child of political prisoners. When Shin Dong-Huyk finally escapes, he becomes ahuman rights “celebrity,” but his life outside of the camp proves to be just as difficult as it was inside it.

Ever heard of an air guitar tournament? Well, think of the Air Sex World Championships as just another outlet to play your imaginary “instrument.” Hosted by comedian Chris Trew, you can pick out a tune, hop on stage and show the crowd just how you get down.

Sure you’ve heard of comedy improv troupes, but how about a musical theater improv troupe? Each week, The Made-Up Musical team sings and dances its way onto the Magnet Theater stage! After an interview with an audience member, the cast puts together a full one-act musical, complete with all the songs and drama you might find on Broadway.

Current day Los Angeles is full of eclectic  art galleries where famous artists and up and coming talent  display their work. However, that wasn’t always the case. The Cool School chronicles the beginnings of the modern-art scene in L.A. and provides interesting insights about the artists who launched it (including Ed Kienholz, Sonia Gechtoff, John Baldessari, Larry Bell, and Dennis Hopper). The film starts with the opening of the Ferus Gallery, a contemporary art space, in 1957.

Want to spend your Saturday afternoon at the movies with your family? The fabulous Fleischer brothers have created an animated Bug metropolis, modeled after New York City. This family-friendly film features Hoppity, a plucky grasshopper that has to fend off the sleazy C. Bagley Beetle who is bothering Hoppity’s girl Honey.  At the same time, Hoppity has to deal with those trampling, littering humans that threaten the neighborhood!

“Anything is possible, Mario, you just gotta believe in it.” Join Mario (Bob Hoskins) and Luigi (John Leguizamo), two wacky plumbers, who go on an adventure to save the beautiful princess (Samantha Mathis) from King Koopa (Dennis Hopper) and the Goombas in a parallel universe called Dinohattan.

Part of the Film Forum Jr., this 1950s sci-fi classic is enjoyable for both parents and their little ones. Leslie Nielsen stars as a space explorer who leads his team on a mission to discover what happened to a mysterious planet’s space colony that has suddenly gone silent. When they discover two survivors—Walter Pidgeon and daughter Anne Francis—from a previous expedition to Altair 4, Nielsen struggles to find out the secrets of this mysterious planet with Robby the Robot, by his side.

The BASEMENT Media Fest is a showcase of modern artists who work with lo-def, lo-tech, and lo-fi motion pix techniques. The evening is a celebration of the mediated experience. Should be a little slice of heaven for  experimental film buffs.

You love The Beatles, yeah, yeah, yeah? This edition of Secret Formula’s beloved sing-along series celebrates the Fab Four with music videos, film clips and other surprises. Complete with themed drinks (like the Sgt. Pepper’s and Rocky Raccoon), the evening will also include a costume contest, so don’t forgot your mop-top wig!

Sketch in Progress at Magnet Theater
Sunday at 10:15PM
Every Sunday night at 10:15, the Magnet Theater hosts a free open mic night. Now what sets it apart from other open mics is rather than stand-up, this open mic is exclusively for sketch and character pieces. It is always fun to make a fool of yourself in a bad german accent with your friends.

Guided Tour of Fort Tilden
Saturday at 10AM

I know, another 10 AM Saturday one, but what can I do/ I am a war buff and, hell, it's summer. Get out of the city for a bit and smell the roses, or whatever by” “exploring the woods with American Littoral Society naturalist Mickey Maxwell Cohen in search of woodland birds, shade-loving wildflowers and little-known historic fortifications of World War II."

5 Pointz is an outdoor graffiti museum open weekends that features tags from artists around the globe all painted onto the warehouse. This could be the last summer of its existence as the owner is attempting to secure permits for a condo development in its stead. Another excursion, but let’s take advantage of some sun while it lasts!

As always please feel free to send recommendations or comments to freddietheintern@gmail.com.

The BAMcinemaFest celebrates its 5th anniversary this year. This festival has dedicated itself to bringing the best and most innovative voices in American independent cinema to one of NYC’s most burgeoning boroughs. With 25 NYC Premieres, you won’t want to miss out on all the fun!

Co-presented with the New York Asian Film Festival and the Hong Kong Economic and Trade Office, this film features superstar and all-around nice guy Jackie Chan who is one of cinema’s most beloved icons. Come out and see his jaw-dropping stunt work, fast paced action sequences and elite stunt team in action on the big screen!

Every year, MoMA's Department of Film teams up with the Robert Flaherty Film Seminars to celebrate a filmmaker who is an invited guest.. This year’s tribute is a mid-career retrospective of Deborah Stratman, a Chicago-based artist, who has had a large impact on the worlds of experimental and documentary film.