Why Ruth Gordon's legendary horror villainess deserves to be the norm. 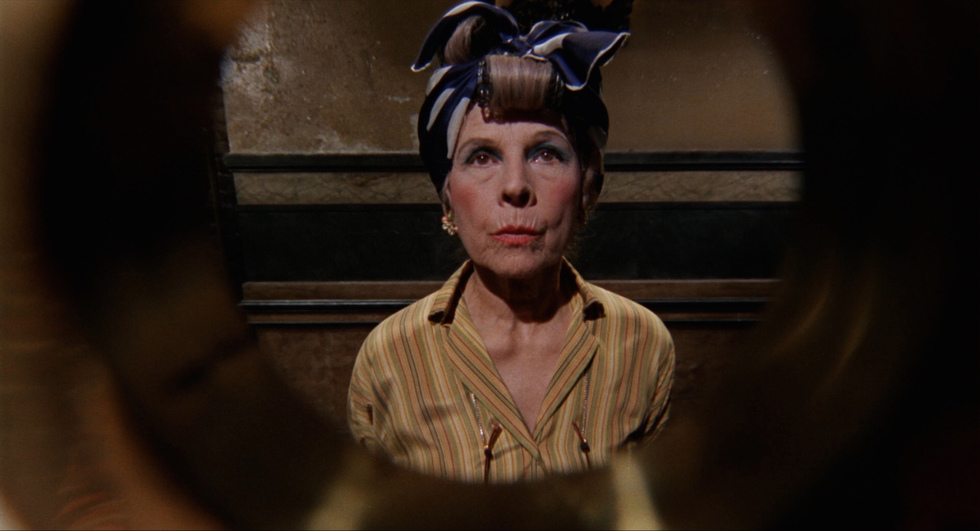 Even as many skeptics insist on marking up its tombstone, horror cinema remains in as stable a condition as ever. It’s still dependably lucrative for mainstream-targeted moviemakers like James Wan and the commercially-victorious Blumhouse network, while ambitious and indie-oriented up-and-comers like Ana Lily Amirpour, Jennifer Kent, and David Robert Mitchell have flexed and pushed the genre with novel and nerve-wracking scare tactics. But in looking back at horror’s past few years, there’s a disappointing deficiency of any truly colorful or complex horror villains.

Roman Polanski’s 1968 film adaptation of Ira Levin’s bestselling Rosemary’s Baby has aged better than almost any horror movie of its time, finding and evoking the everyday treachery of womanhood — in which spouses, friends, neighbors, and even doctors are all liable to mislead and deceive — with psychological penetration, radical empathy, and shiver-inducing formal control. As Mia Farrow's young, enfeebled Rosemary Woodhouse succumbs to the influence of the demon growing inside her, an eccentric network of adversaries emerges from the lacquered walls and labyrinthine corridors of her new home. These satanists-next-door are cleverly personified by veteran performers of Hollywood’s classical era, including noir staple Elisha Cook, perpetual second fiddle Ralph Bellamy, and the brassy, out-lesbian comedienne Patsy Kelly. Leading the charge of this character actor coven is Sidney Blackmer’s dour leader Roman Castevet (née Steven Marcato) and, most notably, his wife, Minnie, the devout Lady Macbeth who procures Rosemary as the innocent incubator for the spawn of Satan and is played in an ingenious, Oscar-winning performance by the utterly singular Ruth Gordon. 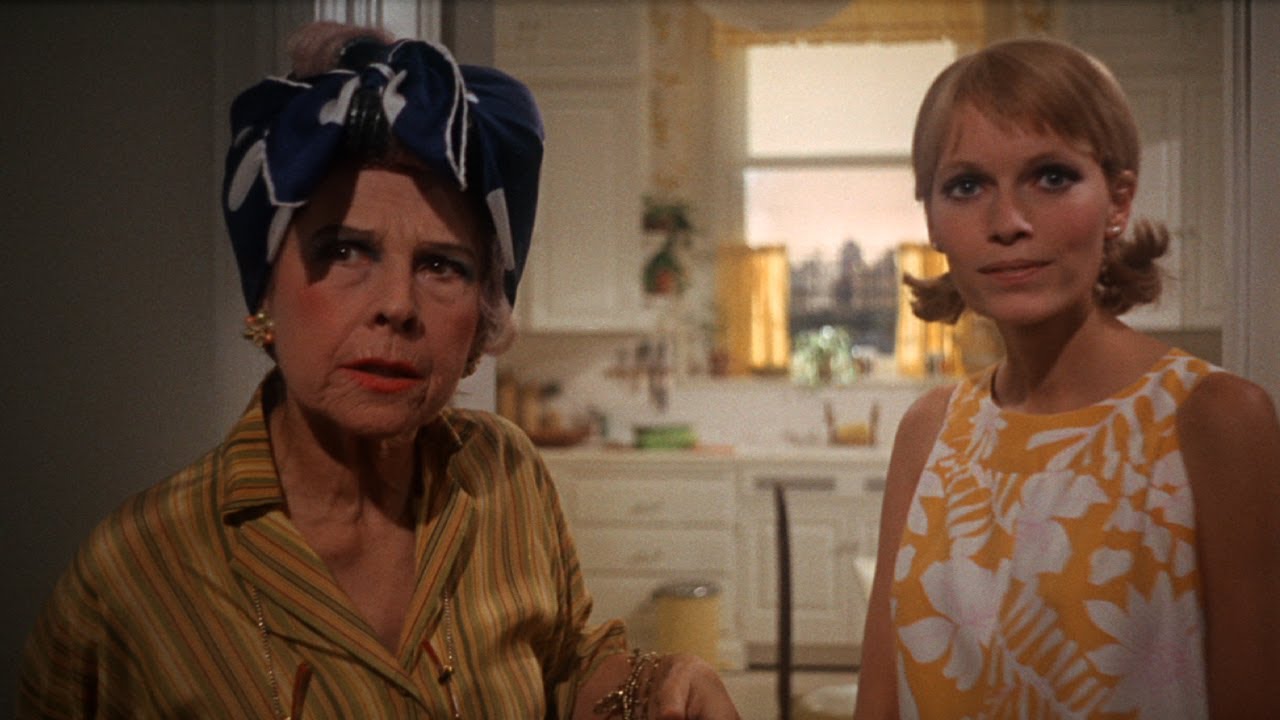 By the time Rosemary’s Baby began production in 1967, the seventy-year-old Gordon was already a widely-known, four-time Oscar-nominated actress-writer of the stage and screen who had been recommended for the part by the film’s production designer, Richard Sylbert, a friend of Gordon and her husband-collaborator, Garson Kanin. On set, she was reportedly a reliable mediator who frequently squelched blow-ups between Polanski and John Cassavetes, cast here as Rosemary’s unconscionable actor husband, Guy. But on screen, few actors have ever taken more perceptible pleasure in animating a destabilizing presence as Gordon, who doesn’t grow into Minnie so much as she wears the character with flair on her patterned sleeves.

Gordon’s real triumph as the mouthy, malevolent Minnie Castevet is all about fashioning a character whose lasting memorability has very little to do with what is on the page and nearly everything to do with how much deliciously diabolical detail Gordon manages to invest in every single second of her screen time. You can discern Gordon’s stage roots through her restless, rapid-fire vocality and the full-bodied liveliness of her characterization, swishing and skulking around the frames and making tremendously tactile use of props. In Gordon’s performance, objects as disparate as a pendant, a sponge cake, a soiled rug, and a whistle become indelible tokens of a villain whose fiendishness is seldom explicated. She, of course, gets to recite a line as ripe for camp as “He chose you, out of all the world — out of all the women in the whole world, he chose you,” which Gordon delectates in like she's squeezing out the meat from a still-breathing lobster. But there’s a casual conviction underlining this flamboyant delivery — and Gordon’s entire performance — that prevent us from simply dismissing Minnie (and Gordon) as light and fussy oddities. She doesn’t counterbalance the inherent darkness of the piece, but deepens and shades it with expertly-rendered comedic aplomb. Her energy can be duly overwhelming, but it isn't always ramped up: one of Polanski and cinematographer William A. Fraker's most iconic shot finds Gordon's Minnie waiting on the other side of Rosemary's door, her lips pursed and jaw tight while every other feature stays in unblinking repose, an eerily unpolished portrait framed by the oval of a keyhole.

If Polanski’s film still draws ire for the compromising position it imposes on Rosemary, for whom maternalism is ultimately less a willful choice than an intrinsic function, then Minnie’s zealotry acts as a subversive counterpoint to this traditional labelling. Before Rosemary’s Baby, we had seen female villains committed to their causes in plenty of films, from Leopoldine Konstantin’s Nazi matriarch in Notorious to Giovanna Galletti’s sapphic fascist seducer in Rome, Open City. But by pouring Levin’s Minnie Castevet into Gordon’s spirited and pint-sized frame, Polanski achieves a depiction of wickedness that we remember less for its dastardly actions than for the unnerving aura it suffuses into the film.

This is, in part, because Gordon emits such a specific personality, as ingrained into the basic character of New York City as Jeannie Berlin’s is in Margaret. But she also registers as a rattling force of nature that Polanski cannot help but focus on. He allows Gordon’s own presence — sharp wit, brittle physicality — to appear as part and parcel of Minnie so that the gap between actress and character becomes porous. We are meant to recognize Gordon in the part and even associate Gordon with Minnie, just as we are meant to recognize the graying Hollywood old-timers that make up the Castevets’ cult. In doing this, Polanski creates an effect that is somehow even more horrific than the film’s oft-discussed rape scene or the increasingly skull-and-skin appearance of Farrow. Gordon’s Minnie becomes the living embodiment of Rosemary’s Baby’s central idea that the familiar is most fearful. After all, there is nothing more chilling than knowing that the devil lurks in the everyday: baking cakes, hosting parties, recommending doctors, and knocking on your front door.

I would love to see more horror villains, like Minnie Castevet, that are rooted in reality, even as they warp the proceedings of their respective films, or even more horror villains that offer creatively-inspired fusions between character and actor. If anything, Gordon’s example could be easily applied outside the horror genre as well. Think about how much more interesting the recent spate of Bond movies would be if its villains — excluding Javier Bardem’s über-outré, sexually-ambiguous Skyfall antagonist — were allowed to diverge even slightly from the colorless molds of handsomely glowering mercenaries and chin-stroking superbaddies, devoid of everything but their malicious intents. Gordon’s Upper West Side witch should serve as a retro reminder to all filmmakers that dehumanized villains may scare in the moment when done well, but flesh-and-blood foes are what linger longest. Monsters and zombies may make our teeth chatter, but it’s villains like Minnie who force us to lean forward in our seats and consider what other horrors might be hiding in plain sight.