Home » Tribeca News » ​The Promise and the Plummet: Foreshadowing the Fall from Grace in CITIZEN KANE
View All News

​The Promise and the Plummet: Foreshadowing the Fall from Grace in CITIZEN KANE

A deep dive into a classic sequence from the most influential of all American films. 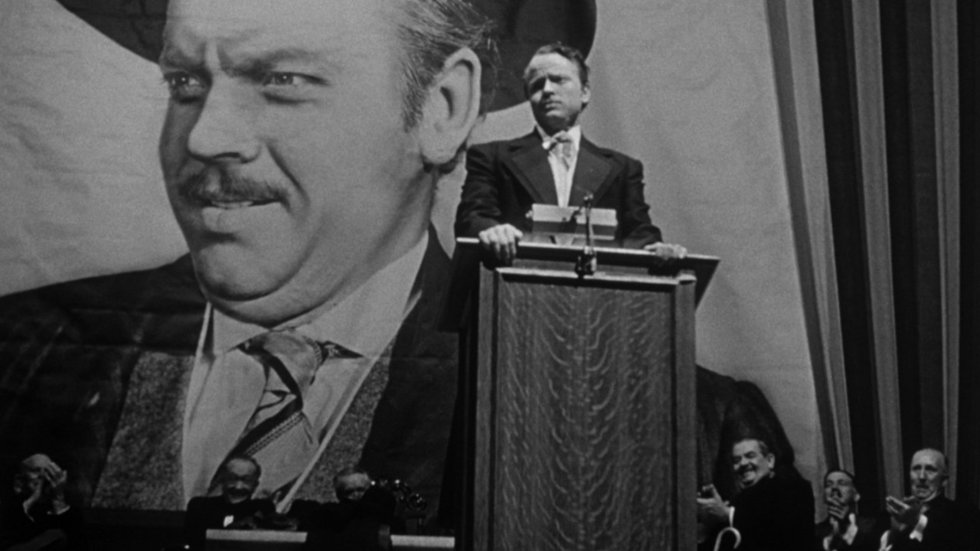 The greatest classic films have an unusual way of refracting our own present through the intricate prism of their own indelible moving images.

Orson Welles’s Citizen Kane charts the stratospheric rise and startling fall of its titular protagonist, Charles Foster Kane, a domineering and deep-pocketed public figure who reigned supreme in early twentieth-century America as both feared newspaper tycoon and modern-day Kublai Khan before his personal, professional, and political achievements corroded in the face of his own weaponized bombast. Amid the determinedly despicable presence of the GOP candidate who will not disappear this election year, Welles’s feature debut, which turns seventy-five this September, is once again curiously primed for some deep revisiting.

In tracing the arc of this ultimate and unflinching antihero, Welles created one of American cinema’s most revolutionary masterpieces, an artistic landmark that still reigns supreme as the most influential forefather of modern film and the oft-cited “greatest movie ever made,” a title endorsed by everyone from the American Film Institute to one Donald Drumpf. A circuitous and ultimately conjectural fictional biography of a self-hyperbolized yet eventually elusive personage, Citizen Kane is a genuinely radical piece of narrative filmmaking that audaciously enabled a mid-century moviegoing audience to fully and multifariously witness the downfall of this brutal and charismatic icon through the sheer power of its own unprecedented technical virtuosity. It deceives us into expecting grand answers and narrative resolutions when the true essence of Welles’s genius has always been his uncanny ability to implicate his audience in the elaborate production of his imposing visions. One can chart the story in as straightforward a manner as possible, but the real pleasure of watching Kane requires the viewer to pay close and unbroken attention to how this wondrous monument is actually being constructed.

Kane is a subjective story projected through an objective eye, told with unforgettably nuanced imagery and inspiredly elliptical montage, as opposed to the high-gloss spectacle and chattery exposition that were old-guard standbys in 1941 Hollywood. In one of Kane’s most famously persuasive sequences, Welles utilizes repetitively-scaled shots, revealingly-positioned angles, subtle camera movements, and an oblique editing pattern to signal the impending undoing of his tyrannical antihero within a moment of presumed but short-lived victory. It all pivots around a spatial and structural behemoth of a scene, in which Welles allows the combined forces of each carefully-made technical decision to tell a deeper story about the pitfalls that the illusion of power and celebrity prevents us from seeing — and escaping.

The root of Kane’s ruin begins with his entrance into the political arena, the most public phase of his ever-changing personage, which is itself preceded not with a bang, but with a song and a speech. In the first scene, the viewer observes Welles’s Kane in a rare moment of joyful intimacy, proudly applauding an at-home vocal performance by his covertly kept mistress, Susan (Dorothy Comingore), a dim-bulb blonde with an open heart but limited talents who will become Kane’s greatest stumbling block. Immediately following this, Kane’s illustrious editor (and soon-to-be auteur) Robert Wise cuts from Kane’s spirited applause in the furnished apartment he bought for Susan to the scattered clapping of a group of working-class townsmen, who have gathered in a back-alley to hear Leland (Joseph Cotten), Kane’s right-hand man, as he stumps with firm-hearted conviction for Kane’s bid for the New York governorship. Leland is situated amid low-hanging clotheslines and standard white posters reading “KANE FOR GOVERNOR,” but in a discreetly sharp use of mise-en-scene, the platform on which Leland stands while plugging Kane’s candidacy is actually the backseat of a shiny automobile, a visual touch that stands in clever contrast to the urban milieu and Leland’s own cheeky description of the profligate Kane as a “friend of the working man.”

There is nothing too urgent per se about each of these seconds-long scenes, each filmed in distancing long shot, although their purposely static nature only builds our anticipation when the camera suddenly cranes forwards and upwards towards Leland, whose increasingly impassioned speech suddenly gives way to an impassioned speech by Kane himself. With one swift cut, Wise transports us from the image of Leland’s slender frame being outflanked by the fire escapes and brick walls of the surroundings in which he canvasses to Kane’s blown-up, posterized face, his surname spelled out like a warning in bold, black lettering. As the camera cranes downward from this larger-than-life rendering of Kane, it finally settles in a high-angle shot on the man of the hour, promoting himself with typical grandstanding panache on a nondescript stage, standing behind a podium while surrounded by a dozen or so supporters. The booming, reverberating volume of Kane’s voice indicates that this arena is clearly larger than the alleyway in which Leland did his ballyhooing, but it isn’t until the next shot that we can fully grasp the size of both this grand space and Kane’s seemingly unstoppable ascendancy.

In extreme long-shot, the vastness of Madison Square Garden comes into full focus from the back of the stadium as we see the surrounding audience and the faraway stage on which Kane simultaneously seduces, manipulates, and caters to his constituency. The venue is packed with people and the people themselves are dwarfed within the shot, as they represent the indispensable but nonetheless depersonalized supporters on whose shoulders Kane can climb upwards. Within the same shot, the camera slowly begins tracking inward towards Kane onstage, but it doesn’t even make it that far before Wise dissolves into a closer long shot of Kane as he ridicules his opponent, the incumbent governor “Boss Jim” Gettys. Cinematographer Gregg Toland continues to close in on Kane via a forward-moving shot that creeps up on him while smoothly transitioning from a normal to lowered angle, capturing the uncanny sight of Kane standing in front of his own graphitized countenance from the sightline perspective of an audience that is now literally being talked down to. All roads indeed lead to Kane, as the previous and following succession of shots indicate, but each road offers a slightly skewed visual variation to the way in which it reaches him.

Eleven alternating medium shots of Kane’s speechifying are interspersed with separate, secluded shots of his nearest and dearest. There is Leland, who is positioned off-center within the audience in two separate low-angled medium shots amid shadowy lighting, as he first looks on with evident boredom at Kane’s grandiose claims until a later shot reveals him applauding with laughter at his friend’s flamboyant self-promotion. There is Kane’s most loyal, lifelong confidante Bernstein (Everett Sloane), heartily clapping upon Kane’s promise to aid the “underprivileged.” There is his well-provided but low-priority wife Emily (Ruth Warrick), dignifiedly sitting in a bright spotlight with the young Charles Jr., who waves to his father and blithely asks mother, “Is pop governor yet?” And then, of course, there is Kane himself, continually framed from on high as he brags about his primacy, delivers a stilted wave back to Charles Jr., and threatens to arrest the unpopular Gettys for corruption, which triggers a wild eruption from a mass of supporters.

Kane is undeniably the point of focus here, the force of energy that Wise keeps returning to and the ironclad figure who magnetizes Toland’s camera, which stays locked to him as he continues his speech. And yet, Toland’s striking use of high angles to capture Kane connotes a force even more towering than him, a POV with a literally elevated position, from whose perspective the filmmakers have enabled us to look down on Kane in his moment of apparent superiority. When Wise cuts from Kane’s pledge to arrest Gettys to a menacingly high-angled shot of Gettys himself, staring down from a lofty perch that provides him with a panoptical view of the ant-sized multitudes having a laugh at his expense (all of whom remain visible in Toland’s detailed deep focus), this boisterous and crowning occasion within Kane’s life takes a sudden turn for the ominous. When Gettys promptly makes his exit a second later, it becomes even clearer that Kane’s political dominance is not long for this world.

We do not yet know that Gettys will force Kane into the ultimate personal quandary immediately following this speech, which concludes with Kane robustly shaking the hands of his supporters as he makes his way off-stage, grinning for a swarm of photographers with misplaced pride. For Kane, there is no greater cause worth fighting for than himself, and were we simply reading this scene on the page, we might misconstrue it as an out-and-out landslide. But through the slightest technical manipulations, the fuller narrative of Kane and Kane comes deeper into focus, reaching even beyond the events depicted within the film’s biographical super-structure.

This sequence perfectly summarizes Kane, encompassing all of the major players encircling the enigma at its center: the partner who will soon emerge a bitter skeptic, the sycophant who will persistently defend his leader’s dignity, the gracefully sidelined son and wife-mother who could never muster their patriarch’s sustained attention, and the second, future Mrs. Kane, out of sight though waiting in the wings. The even illumination of Emily and Charles Jr. allows them to be seen prominently by everyone within the arena, making it no surprise that they will die as Kane lived, in full view of the public eye. Likewise, the oblique blocking and distinctively chiaroscuro lighting of Leland primes us for the darkening and final severance of his friendship with Charles, just as our brief glimpse of Bernstein exuberantly cheering Kane is a perfect encapsulation of a character who will never stray far from his captain’s fold.

Even if Kane’s own chances of ruination seem highly improbable within this wildly successful episode of his career, Welles, Toland, and Wise cunningly plant the seeds for what is to come by skewing our own impressions of this event in ways that pique our attention but never explicitly divulge the turmoil that will soon arise. Watching this sequence again amid the neverending barrage of raucously and insufferably unfiltered speeches that have come to characterize Trump’s absurd political theater, it is all too easy to see his deluded, pompous hypocrisy in the blowhard form of Welles’ Kane. How far, then, can a fiercely-protective man like Trump possibly push his hubris before he, like Kane, fails to mind all of his own blind spots? In the wake of definitively alienating statements about Gazala Khan’s silence and Barack Obama’s birthplace and “founding” of ISIS, is it pure naiveté to wonder if Trump’s disintegration is just a deferred inevitability, even as his polling mystifyingly grows? Sure, these are different times and the tarnishing errors of the past may seem comparably quaint by today’s standards. But if Welles’ legendary sequence accomplishes anything, it is reminding us that even in hours of triumph, there forever exists the possibility of a sudden plummet without the slightest warning. Even if you are Donald Trump. Even if you are Charles Foster Kane.