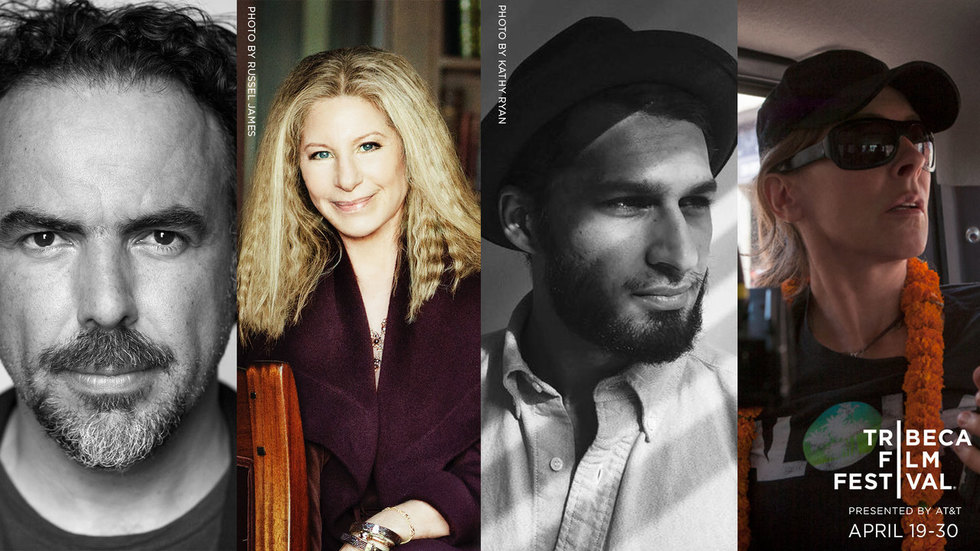 The Tribeca Film Festival, presented by AT&T, is kicking off its first batch of programming announcements with a stellar trio of maverick talents who share a combined total of eight Academy Awards and whose singular careers and momentous artistic visions represent all that is daring, dynamic, and diverse within the world of cinema and beyond.

Today, Tribeca announced acclaimed multi-hyphenates Barbra Streisand and Alejandro González Iñárritu as participants in two Tribeca Talks conversations for the 16th annual Festival. The legendary Streisand will take part in the Tribeca Talks: Storytellers series that features pioneering creators who work across multiple mediums to tell eye-opening stories. And four-time Oscar winner Iñárritu will participate in one of the headline conversations in the Tribeca Talks: Directors series, in which today's leading auteurs chronicle their moviemaking journeys.

Also announced is the world premiere of Kathryn Bigelow and Imraan Ismail’s vital virtual reality documentary short The Protectors: Walk in the Ranger’s Shoes, which transports users to a day in the life of African rangers protecting elephants from ivory poachers.

“At Tribeca we celebrate the power that film and art has to transport and unite communities. As the first woman to win the Oscar for directing, Kathryn Bigelow continues to break boundaries in storytelling by using VR to take us to the frontline battle with Ivory poachers in the Congo in the stunning new documentary which she co-directed with Imraan Ismail. We are thrilled to be able to debut this work as part of Tribeca’s renowned VR program,” said Jane Rosenthal, Executive Chair of Tribeca Enterprises and Tribeca Film Festival Co-Founder.

“These three creative forces – Alejandro, Barbra, Kathryn – are true auteurs. They push themselves and their audiences by constantly entertaining and challenging us through their work,” said Tribeca’s Paula Weinstein. “I am ecstatic that Alejandro and Barbra are joining us for Tribeca Talks. Alejandro’s vision inspires me; moments from each of his films are seared in my mind. There is so much inventiveness. You are on his trip. Everyone has recognized Barbra as a singer and songwriter but her voice as a filmmaker, her tenacity as a director, and fearlessness as an activist is what I admire most about her.”

“It’s all about the story. It has to be a story I want to tell, a story I have to share, otherwise there’s no reason to make the film. A good story goes straight to the heart. It allows us to identify with the characters and broaden our own experience… and perhaps even change the way we view the world,” said Streisand.

"We must stop the senseless slaughter of these magnificent and sentient creatures, if not us then who? Eliminating the market side of the ivory trade may take generations to be fully effective and extinction will not wait. This film shows the park rangers of Garamba National Park, in the DRC, they are the last line of defense in a desperate war with poachers to stop the ivory trade at its source,” said Bigelow.

The Festival Hudson Pass goes on sale at special early discount pricing of $999.00 (regular price: $1,250.00) beginning November 25th through December 31st and will be available at TribecaFilm.com. The Hudson Pass offers ticketless access to all Evening, Weekend, and Matinee Festival screenings, and Tribeca Talks events including Director Series, Storytellers, and Tribeca TV. Also included is access to the Festival Hub, where you can experience the latest and most innovative VR storytelling, attend special events, and enjoy one of the Hub’s many lounges.

The Protectors: Walk in the Ranger’s Shoes - Bigelow and Ismail’s VR documentary chronicles a day in the life of a ranger in Garamba National Park, managed by African Parks, in the Democratic Republic of Congo. These rangers are often the last line of defense in a race against extinction at the hands of poachers slaughtering elephants for their ivory tusks. The rangers face constant danger and even death, at the service of these sentient, noble creatures. Rangers are truly the unsung heroes in this race against time. The Protectors is eight-minutes long and will be released in 2017 by National Geographic, Here Be Dragons and Annapurna Pictures.

Widely recognized as an icon in multiple entertainment fields, Barbra Streisand has attained unprecedented achievements as a recording artist, actor, director, producer, concert performer, author and songwriter. Streisand has been awarded two Oscars, five Emmys, ten Golden Globes, eight Grammys plus two special Grammys, a special Tony award in 1970, and two CableACE Awards – the only artist to receive honors in all of those fields of endeavor. Streisand received the Presidential Medal of Freedom from President Barack Obama this past year. Her many other honors include the American Film Institute's Lifetime Achievement Award, the National Endowment for the Arts Medal, three Peabody Awards and the French Légion d'Honneur. She is also the first female film director to receive the Kennedy Center Honors. Streisand is a devoted philanthropist who works tirelessly to fight for what she believes in. A woman of action, Streisand founded The Barbra Streisand Women’s Heart Center at Cedars-Sinai and co-founded the Women’s Heart Alliance, helping to raise awareness and push for more research into women’s heart disease, the leading cause of death among women.

Alejandro González Iñárritu was born in Mexico City, the youngest of five to Luz María Iñárritu and Héctor González Gama. Crossing the Atlantic Ocean on a cargo ship at the ages of 16 and 18, Iñárritu worked his way across Europe and Africa. He has noted that these early travels as a young man have had a great influence on him as a filmmaker. The settings of his films have often been in the places he visited during this period.

Iñárritu, an Academy Award-winning filmmaker, recently won his second consecutive Academy Award for Best Director for The Revenant, a sprawling tale of revenge and survival, making him one of only three directors to ever win consecutive Oscars and the first to do so in 65 years. Last year, Iñárritu won three Academy Awards for directing, co-writing and co-producing the dark comedy Birdman: Or (The Unexpected Virtue of Ignorance), about an aging cinema superhero launching a Broadway show. Iñárritu also is known for the films Amores Perros, 21 Grams, Biutiful, and Babel, which earned seven Academy Award nominations and the Best Director prize at the 2006 Cannes Film Festival. Iñárritu is the first Mexican filmmaker to have been nominated for best director and best producer in the history of the Academy Awards.

Additional programming will be announced in 2017.