Home » Tribeca News » One for Me / One for Them: Cate Blanchett
View All News

One for Me / One for Them: Cate Blanchett

With 'Blue Jasmine' opening this week, Cate Blanchett is at the forefront of our thoughts. She's had a tremendously varied career, and one that has frequently dipped back and forth between commercial and creative, studio and independent. How has she kept that balance? We took a look. 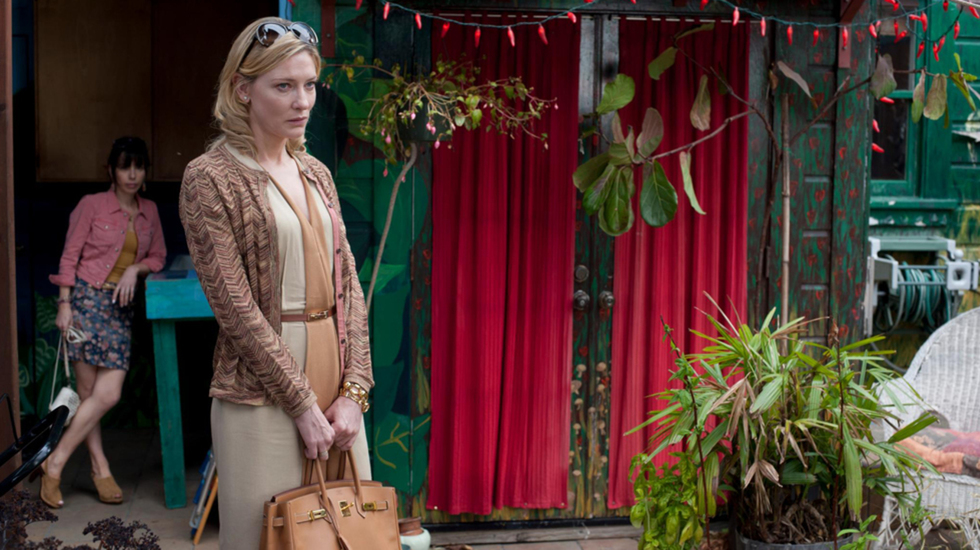 1997-98:
Blanchett basically stormed the cinematic landscape all at once with her nominated-for-everything performance in Elizabeth. She had previously starred opposite Ralph Fiennes in the English costume drama Oscar and Lucinda, but with Elizabeth, she immediately established herself as one of the premier actresses of her generation and, thanks to an Oscar race that was reduced to a not-always-fair binary, an Actor's Actor (as opposed to Gwyneth Paltrow as the Movie Star). Advantage: HER

1999-2001:
In the wake of her Oscar nom, Blanchett had a famously busy few years that showed off her versatility. She pulled off costume comedy in An Ideal Husband, got all middle-class American opposite Billy Bob Thornton TWICE in Pushing Tin and Bandits, and took a small role in the big Miramax awards play of that year, The Talented Mr. Ripley, and ran with it, delivering what many said was best-in-show work. She worked with acclaimed directors like Sally Potter (The Man Who Cried) and Sam Raimi (The Gift). She was even bailed out by an accident of timing, with her biggest flop (The Shipping News) overshadowed by her her biggest hit (The Lord of the Rings: The Fellowship of the Ring). All in all, a textbook example of taking advantage of a surge in castability to take on a wide variety of projects. Advantage: HER

2002-2005:
With cameo-length appearances in the second and third Lord of the Rings holding things down on the commercial side, Blanchett went hard in the indie direction for the next few years, headlining films like Tom Tykwer's Heaven, Joel Schumacher's Veronica Guerin, Wes Anderson's The Life Aquatic with Steve Zissou, and Jim Jarmusch's Coffee and Cigarettes. None of those hit as big as some expected (Golden Globe nomination for Veronica Guerin notwithstanding), and when combined with the Ron Howard western The Missing that was ALSO something of a flop, her career appeared to be on a downswing. And then came Martin Scorsese's The Aviator, a commercial and critical triumph that gave Blanchett a plum featured role playing screen legend Katharine Hepburn. She won the Oscar. Advantage: HER

2006-2008:
With that Academy halo firmly in place, Blanchett would go on to three more nominations in quick succession -- for Notes on a Scandal, I'm Not There, and Elizabeth: The Golden Age -- and with the exception of Steven Soderbergh's The Good German, which came and went without much notice, the films were all quite successful. That includes performances in Best Picture nominees like Babel and The Curious Case of Benjamin Button. Her one commercial venture in this period, Indiana Jones and the Kindom of the Crystal Skull, was a critical punching-bag but a huuuuge box-office hit. Advantage: HER

2010-2012:
After having so throughly made indies her realm, Blanchett's career went more commercial in these years (and you'll notice that breakneck pace of her career slowed considerably too). Her one indie project turned out to be the best by a good measure, playing the angular antagonist in Joe Wright's Hanna. But more visible were her Maid Marian in Ridley Scott's Robin Hood and a return as Galadriel in The Hobbit: An Unexpected Journey. Neither of those pictures met their pre-release expectations, turnin these years into a rather quiet, studio-dominated period for Blanchett. Advantage: THEM

2013:
In a triumphant return to small-scale filmmaking, Blanchett is currently receiving raves for her performance in Woody Allen's Blue Jasmine. At the end of the year, she's back in the studios' good graces with both The Hobbit: The Desolation of Smaug and George Clooney's The Monuments Men. Where the balance of her career stands after those movies open remains to be seen. Advantage: ???