Home » Tribeca News » One for Me / One for Them: Julianne Moore
View All News

One for Me / One for Them: Julianne Moore

This world-class actress and star of 'The English Teacher' has been balancing the commercial and the creative for two decades now. How's she doing? 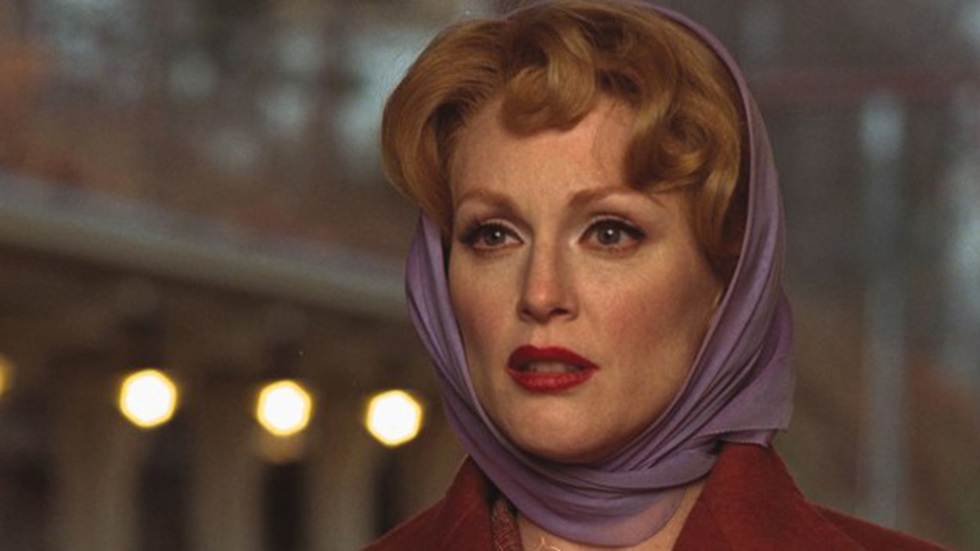 Coming up from the ranks of soap operas (she played twins on As the World Turns!), Julianne Moore has drifted through almost every genre imaginable. She's managed to find enormous success, particularly when it came to the critical community. But her career is a testament to the need to balance commercial success with creative indulgence, and the balance has not always been easy to maintain. How has it worked out for her?

1992-93:
Moore's breakthrough into feature-film acting came gradually, via a series of supporting roles in pictures of various appeal and esteem. There was The Hand That Rocks the Cradle, which saw her meet her end at the hands of Rebecca DeMornay and a vengeful greenhouse. She flirted with Aidan Quinn in Benny & Joon, assisted the escaped Harrison Ford in The Fugitive, and was spurned for Madonna in the notorious Body of Evidence. On the smaller side, Moore was cast in the sprawling, satisfying Short Cuts for Robert Altman. Her scenes with on-screen sister Madeline Stowe were among the film's best moments. It was an early indication of what Moore could do when teamed with a visionary director, and she got an Independent Spirit Award for her trouble. Still, for the moment, her career was decidedly in the studios' hands. Advantage: THEM

1994-96:
The supporting roles in big studio flicks kept coming for Julianne, and with a bit more prominence, too. She was the female lead in both the Sylvester Stallone/Antonio Banderas movie Assassins and the fertility comedy Nine Months, where she played the ever-more-pregnant wife of a hot-off-of-Four Weddings and a Funeral Hugh Grant. But at the same time, she was able to work in a bunch more art films to increase her cred in the prestige genre. Films like Merchant-Ivory's Surviving Picasso, Louis Malle and Andre Gregory's experimental Vanya on 42nd St., and Todd Haynes's Safe. The latter two films earned her boatloads of critical notices and some more awards attention (Best Actress with the Boston Critics for Vanya; another Indie Spirit nomination for Safe). This was the year that Moore became an actress's actress. Advantage: HER

1997-98:
If the previous two years brought Moore her biggest critical successes, the next two years brought her the biggest mainstream exposure of her career, primarily as the female lead in Steven Spielberg's blockbuster sequel The Lost World: Jurassic Park. But while that movie was a commercial smash but a critical dud, the real successes of this period were the films that straddled the line between the two and allowed Moore to work with major auteurs while still playing the multiplexes. This started with Paul Thomas Anderson's giant breakthrough, Boogie Nights, for which Moore raked in dozens of awards and nominations (including her first Oscar notice), and continued with the Coen Brothers (The Big Lebowski) and even Gus Van Sant's frequently maligned Psycho remake. Advantage: HER

1999:
After her breakthrough year of 1997, Moore became the go-to supporting actress for high-quality indie projects. Or so her massive 1999 output would suggest. A re-teaming with PT Anderson on Magnolia was her finest achievement that year, but she also turned in very strong work in Robert Altman's Cookie's Fortune, A Map of the World opposite Sigourney Weaver, and the period comedy An Ideal Husband. For these roles combined, she was named the National Board of Review's Best Supporting Actress. She also took the lead role in Neil Jordan's The End of the Affair, nabbing her second Oscar nomination in the process. None of the films made much of a mainstream dent, but Moore was perhaps the most critically acclaimed American actress working at the time. Advantage: HER

2000-01:
Unfortunately, the worm almost always turns, and Moore suffered some career setbacks. After an almost entirely quiet 2000 (are we really counting a cameo in The Ladies Man?), she lined up four films for 2001, each one disappointing in its own way. The most attention-grabbing misfire was also the most understandable. You can see all the reasons why Moore would have stepped into the Clarice Starling role in the Silence of the Lambs sequel Hannibal, but the end product was an atonal fizzle, despite making some decent money at the box-office (as you could imagine a Silence of the Lambs sequel would). Her other mainstream effort saw her team with David Duchovny and Seann William Scott for the comedy dud Evolution. Things weren't any better at the art-houses, where the putative Oscar contender The Shipping News proved to be unpopular with critics and audiences. Advantage: THEM

Julianne came back in a big way in 2002 with two huge critical favorites. With The Hours, Moore teamed up with Meryl Streep and Nicole Kidman for what was billed as an all-star triptych of actresses. All three women got their share of raves, and the film itself was a rather huge success for a feminine literary drama. Speaking of which, Moore re-teamed with her Safe director Todd Haynes for the biggest raves of her career as Cathy Whitaker in Far From Heaven. Critics flipped for her, and she took home no fewer than twenty Best Actress citations. Come Oscar time, Julianne was nominated for both films, though she would go home empty handed (dropping Best Actress to her Hours co-star Kidman), but the year was nothing short of a triumph. Advantage: HER

2004-06:
Another quiet period followed the mega-success of 2002 -- no films in 2003 -- and when her next batch of films were released, the results weren't great. Not the indies (Trust the Man; The Prize Winner of Defiance, Ohio) and not the mainstream efforts (Laws of Attraction; The Forgotten; Freedomland). The best film she made during this period, however, was the utterly brilliant Children of Men, which renders all other arguments moot and redeems any droughts of quality. Advantage: HER

2007-09:
The mainstream failures in the previous few years took their toll, however, and Moore's output began to look more uniformly independent. Truly, the only mainstream efforts during this period were the woefully misguided Next and a voice-only cameo in Eagle Eye. Her large number of indie movies had their highlights -- she was quite strong opposite Eddie Redmayne in Savage Grace; she got to participate in Todd Haynes's Bob Dylan experiment I'm Not There, which had to be quite rewarding -- but there were almost as many films that didn't reach expectations (Atom Egoyan's Chloe; Fernando Meirelles's Blindness). Moore's biggest success of this period was certainly her role in Tom Ford's A Single Man, where her supporting performance drew the kinds of raves she'd received a decade before. Advantage: HER

2010-12:
Julianne would make her way back into the mainstream with a handful of very successful mid-level projects. In Lisa Cholodenko's The Kids Are All Right, Moore coupled up with Annette Bening, and the both of them earned raves. A Best Picture nomination helped the film attain an unexpectedly hefty box-office tally. The next summer, Julianne was back with another solid hit, Crazy. Stupid. Love., proving herself to be on a box-office role in the most unlikely of hit genres: the family dramady for adults. The following year, Moore would be beamed into living rooms all over the country as she played Sarah Palin in HBO's high-profile Game Change. She'd go on to rake in all sorts of awards for the performance, returning herself to the realm of America's most prominent actresses in the process. Advantage: HER and THEM (which I guess means HER)

2013:
It's shaping up to be a very Julianne year this year. Already, she's coming out with buzzy indies like What Maisie Knew and the Tribeca Film Festival entry The English Teacher, which reaches theaters this weekend. Later this year, she joins Joseph Gordon-Levitt for his directorial debut, Don Jon, and also is set for her most commercial endeavor of the year, as Mrs. White in the remake of Carrie. Advantage: ???