Home » Tribeca News » One for Me / One for Them: Maggie Gyllenhaal
View All News

One for Me / One for Them: Maggie Gyllenhaal

With 'White House Down', indie darling Maggie Gyllenhaal is making another stab at mainstream blockbuster filmmaking. But is she keeping the right balance between commercial and creative endeavors? We charted hers career from year-to-year to see how she’s doing. 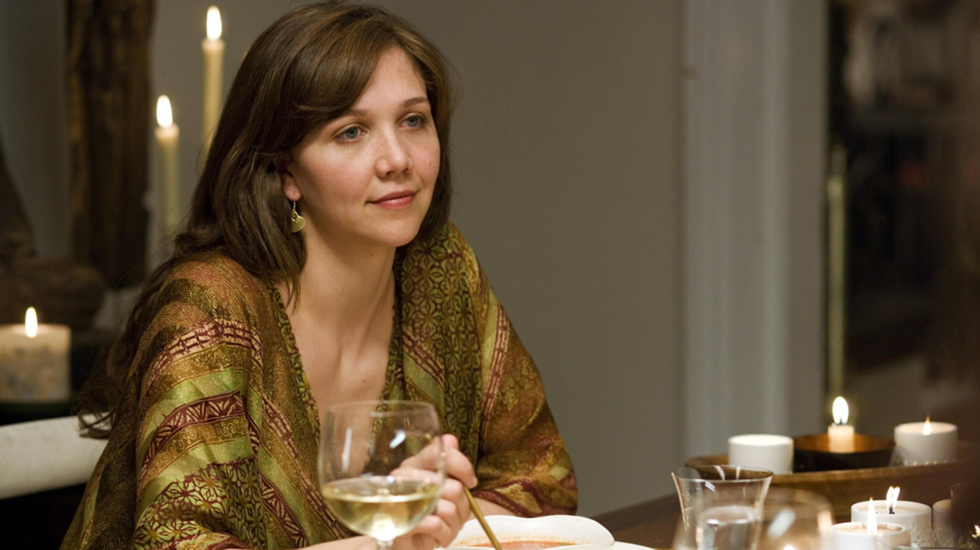 2001-2002:
Gyllenhaal's career kicked off in earnest with a performance opposite her real-life brother Jake (as his on-screen sister) in Donnie Darko. She could also be found in the Drew Barrymore passion project Riding in Cars with Boys. Neither project could honestly be attributed to any kind of career choice Gyllenhaal made, as she was just getting her career off the ground.

But the roles she took in the following year certainly kept things on an indie wavelength, including a pair of movies for screenwriter Charlie Kaufman, Adaptation and Confessions of a Dangerous Mind. Sure, there was the occasional bit part in a studio comedy (40 Days and 40 Nights), but she was making her name as an indie queen. that reputation would be cemented by a lead role in the dark comedy Secretary. She got a Golden Globe nomination and had officially arrived. Advantage: HER

2003-2004:
After such a busy year in 2002, Gyllenhaal cooled things down some, and here's where we first see the signs of a One For Me/One For Them strategy. Unfortunately, both her indie effort — John Sayles's Casa De Los Babys — and her mainstream supporting performance — opposite Julia Roberts in Mona Lisa Smile — came and went without too much notice. Mona Lisa Smile was the more resonant of the two so ... Advantage: THEM

2005-2006:
Falling back on her indie bona fides, Gyllenhaal found success and some of the best reviews of her career, particularly for the Don Roos ensemble comedy Happy Endings and Laurie Collyer's single-mom drama Sherrybaby (for which she received her second Golden Globe nomination). Those two successes easily outweighed the non-reaction to Trust the Man. In the mainstream arena, Gyllenhaal never really sold out, instead choosing wide-release projects that still felt personal, like Oliver Stone's contemplative World Trade Center and the reality-bending Stranger Than Fiction. Even her foray into animated-movie voiceovers — Monster House — felt like more of an underdog than the big Pixar behemoths. Advantage: HER

2008-2009:
This period saw Gyllenhaal's biggest financial and personal successes. After taking over for Katie Holmes in The Dark Knight, Gyllenhaal was one of the mjaor stars of the year's runaway blockbuster hit. (Though it was a double-edged sword, since many reviews were not kind to her laid-back performance.) The next year, she would receive her first (and only, to date) Oscar nomination, for Bes Supporting Actress opposite eventual Oscar-winner Jeff Bridges in Crazy Heart. Though some — this writer, for exmple, would point to her performance as a monstrous Earth mother in Away We Go to be the clear highlight of this time period. Advantage: HER

2010-2013:
The ensuing years, post-Oscar nomination, saw Gyllenhaal try to capitalize on her newfound Hollywood clout. A paycheck gig here (2010's Nanny McPhee Returns); an indie trifle there (2011's Hysteria). 2012's Won't Back Down seemed like her stab at a kind of best-of-both-worlds crossover hit, but her co-starring effort with Viola Davis, while smart, thoughtful, and rousing, was largely ignored at the box office. Which brings us to this summer, and Gyllenhaal once again taking on the summer blockbuster market in White House Down. It's a supporting role, but maybe it bugs her another few indie successes, as her pattern suggests. Advantage: ???

Previously: Who Are The 5 Creepiest Movie Characters of 2013 So Far?