Girlhood, Interrupted: Mélanie Laurent on Losing Friends and Working Out Demons in BREATHE

Mélanie Laurent talks practicing the art of cinematic catharsis in her second directorial outing, a bruising drama about a poisonous female friendship. 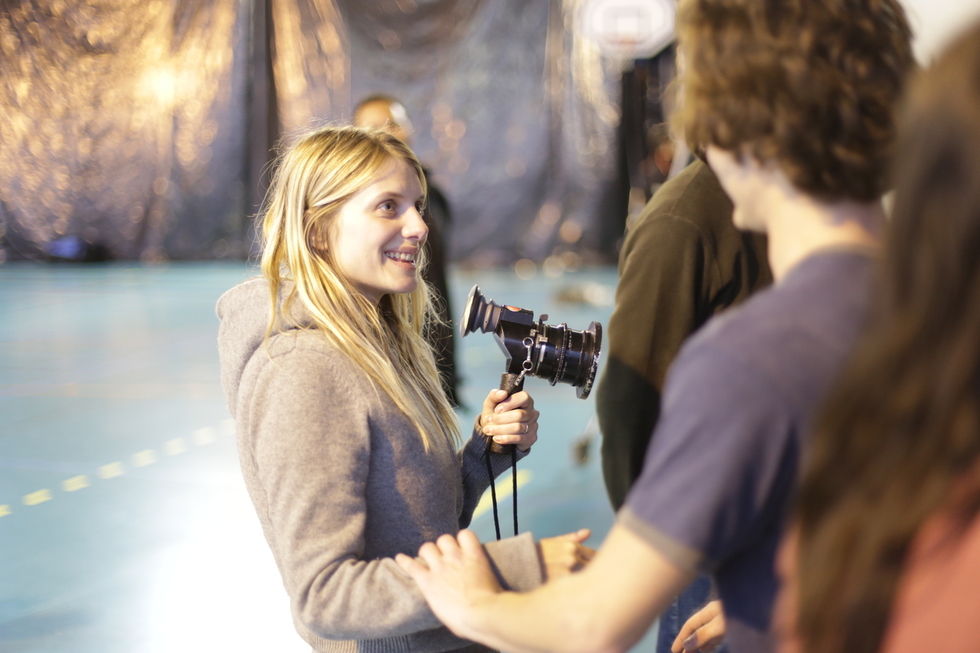 Mélanie Laurent has already secured herself a place in auteurist history books as Shoshanna Dreyfus, the Franco-Jewish girl who sent a memorably fiery message to Nazi Germany in Quentin Tarantino's nutty 2009 Reich revenger Inglourious Basterds. But forget Tarantino: Laurent may have her own chapter to begin prepping.

Following The Adopted, her 2011 directorial debut that remains annoyingly hard to locate in the states outside the festival circuit, Laurent is back with her sophomore project, Breathe, an evocatively intense drama based on Anne-Sophie Brasme's dark 2001 novel Respire, which is also the screen adaptation's original French title. In the film, two French teenagers (played by relative newcomers Joséphine Japy and Lou de Laâge) form an all-consuming bond during their senior year of high school, only to find this friendship deteriorate over petty jealousies and fierce personal rivalries.

It's a recognizable story, but if you're looking for uplift, you're out of luck; there are no adorable "friends forever" pacts to be found here. This is a harrowing and twisted breakdown that's traced with natural style and thematic richness by Laurent, who remains best known to American audiences for Basterds and her warm turn as Ewan McGregor's dreamily elusive girlfriend in Mike Mills' 2011 indie gem Beginners. But Breathe, which begins a run at IFC Center this Friday before unveiling across the country over the next few weeks, tells a cautionary tale both engrossing and universal enough to firmly announce Laurent as a versatile cinematic talent worth following.

We spoke to Laurent about the unique freedoms of page-to-screen adaptations, rebuking the "teen movie" label, and why her Basterds breakout was an unforeseeably mixed blessing.

Breathe has been a staple of popular French literature for over a decade now. You’ve said before that you’re a longtime fan of the novel but what initially drew you to the idea of adapting it for the screen?

I was seventeen when I read the book. And [Brasme] was seventeen when she wrote the book. And, I don’t know, I think I was so jolly at that moment at school. So the movie came like a flash and it was like, Oh my god, it’s so what I feel. It’s not that dramatic in my life, but girls are so dramatic and everything is so complicated. And I felt a lot like a victim all the time. So I was very in shock when I read the book.

And then I forgot it a little bit. I wanted to make the movie when I was seventeen but then nobody believed in the project because I was too young. And so I made The Adopted. And then we talked with my producer about making another one, the second one, which is really important. Like, you have to find the perfect subject. And I just talked about that book and I said, “You know, it’s kind of easy to make because it’s not a super expensive movie. I just have to find two amazing actresses. It’s a very simple story and it’s dark and cruel but then I can put a lot of lightness in it. And maybe we should do that.” And I did the adaptation in two months. We shot in six weeks and we edited in six weeks, which was so fast compared to my first one and compared to the third one [the upcoming environmental documentary Demain (Tomorrow)]. It was like everything was working. Like magic.

There are some notable differences between the book and the film: for instance, the prison framing device is done away with entirely, which actually only adds to the film’s mystery. Breathe is such an admired and widely-read text, did you always feel free to take such liberties when adapting?

I met the author before I was starting to write. And I said to her, “I’m going to change a lot of the book.” And I didn’t read the book again. I went off my memories when I was seventeen. So, I wrote the script but I didn’t adapt the book. I wrote a story between Charlie and Sarah and I realized at the end, when I read the book again, that I just kept [the] association of that relationship very perverse. But Sarah’s mother was really nice and friendly [in the book]; I did the worst mother ever. The book takes place in four years; I did everything in eight months, in the story. That was a very Parisian story. I made everything in suburban France. I changed everything. I kept the names and I kept the association — the atmosphere of what I felt. And I gave the script to the author at the end. She was happy and when she saw the movie, she said, “If I had to rewrite the book today, I would do it like that.” So I was really relieved.

On both this film and The Adopted, you worked with co-writers who are also actor-writers like yourself. How have your experiences as actors benefitted your writing?

Oh yeah, that’s funny. I’m always working with actors who just became screenwriters. I think it’s easier, even for dialogue. We can play, we can act. Most of the time we just write one scene and we decide to act it out to see what happens. So I think it goes faster.

Movies about female friendships tend to veer either towards the comically light or dramatically sentimental, but Breathe is probably as dark as this genre gets. Was this darkness something that you felt was missing from the genre?

I think my only reference — if I had one — was The Virgin Suicides. I didn’t watch any teenage movies. Oh yeah, I remember a movie… Uh, merde — Rosa…? About two girls. One of them slept with the dad. Rosa and…? It’s two names. It’s a female director. Merde! [Editor’s Note: I later realized she meant Sally Potter’s 2013 drama Ginger and Rosa, starring Elle Fanning.] Actually, you know my big reference? It was… [Mutters in French] I can’t remember… with the Olsen sister…? Martha Marcy May Marlene! That was my big reference. So, you see, very far away from older teenage movies…

I think [Breathe] is not a teenager movie. It’s a relationship and it could be a dream and it’s rebuilt like it’s a nightmare. And I wanted to be very realistic. The only thing I did was I made the movie so it’s really open and wild. And it became like very — [Mimes a camera pushing in] — close to her face. I changed the sound. The sound is stereo and it becomes mono, so when you see the movie, you don’t really see — [Opens her arms and slowly pushes them in] — but you can feel there is something different. We changed the light. Very light at the beginning, especially for the vacation. Very wide and organic shots, sunshine and laughing and suddenly — [Snaps her fingers] Wow! That shot of [Joséphine] in front of the sea, it’s really like, Oh my god, she’s going to be so alone facing that big, big, new life. So I think every time I’m doing a movie, I’m not asking myself so many questions, I think I’m just saying, “This is my subject. How am I gonna be exactly with my subject, with my way to film?” It’s the only thing that matters.

There are many moments in the film that are centered around these awkward family vacations and embarrassed bedroom confessionals and hallway fights that resonate for anyone who was ever a teenager or stepped foot inside a high school. But there’s also incredible pain and poignancy to these scenes that feels deeply distinctive and wholly your own. How personal is this story to you?

A lot. [Laughs] A lot because everything was very complicated with girls at that age and then it became the worst when I grew up. Especially in my job. All those “amazing relationships with actresses” when you shoot a movie and everything is fun and suddenly, oh my god, there is competition! And, you’re like, So what? I’m so proud of you! And… suddenly they’re not. [Laughs] I lost a lot of friends when I did Inglourious Basterds. And then there was a love story also [that] destroyed me a lot. It’s funny how you can use all that darkness in your life by making a movie and then it’s kind of, like, everything disappears. I remember when we shot the last scene… We put a… [Points to her ear] I don’t know the…

And I remember when I said “cut,” I said “cut” to so many things that day. I said “cut” to all those so complicated relationships. So… lost of energy. So much. You’re losing so much energy. And all the doctors and everybody will tell you exactly the same thing: when you meet a pervert — a pervert? Yeah, a pervert — The only way to save your life is to go away. It’s the only way. They can’t do anything if you just, like, go away. So it’s not easy to do it, of course. But then I think growing up is for that exactly, just to understand, like, Okay, I’m going to be so unhappy in that relationship, I should go away, right now. When you’re a teenager, you just need a simple life and everything is so intense and you can’t say, at 18, “Yeah, I should go away, if that’s safe.”

How have you changed as an actor since becoming a writer-director?

I think I’m loving being an actress even more because now it’s become like very… enjoyable, to do it, compared to the big work of a director and the big responsibility. I feel like, Okay, yeah, I’m here and I have a text, it’s already there. And I have a director, and he knows or she knows exactly what she wants. I’m here to do everything they want, instead of having, like, all the ideas on my own, which is sometimes so scary. And so I think, yeah, I changed a lot. I’m more happy on set as an actress now. And then, what I love the most, is that I feel like I’m still on the best cinema school ever, observing amazing directors and I’m like, Oh, yeah! Oh, yeah, that’s good! Oh, it’s a good shot! Oh, I should do that! And I love that. It’s a new place for me to write also. Like, I’m writing a lot of things when I’m shooting because, before that, I was waiting. Now, I’m just using that time to create things. And it’s good.

Breathe opens this Friday, September 11th, in New York City at IFC Center, with Laurent in attendance on opening night.