The comedic star says he can't support the level of violence in his own film, but might that be all the publicity it needs? 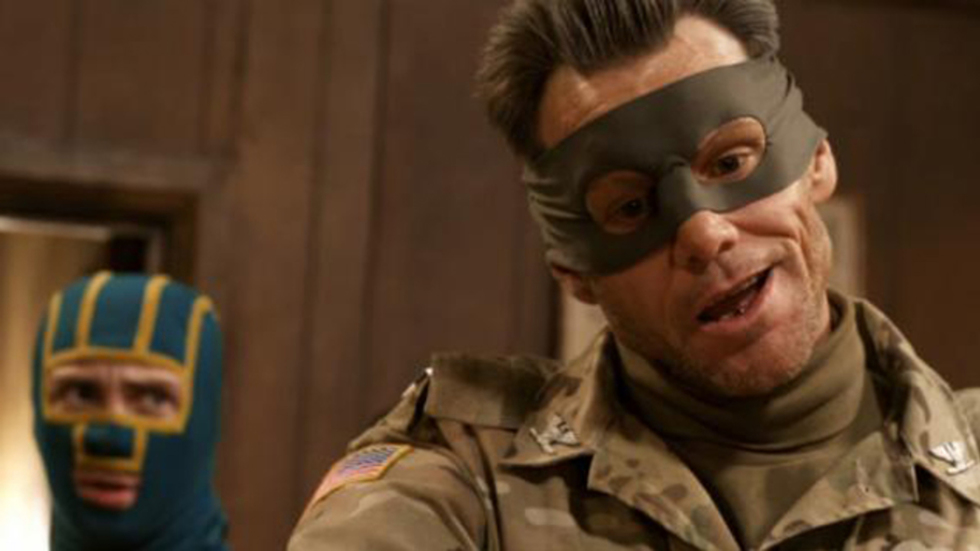 Over the weekend, comedic former A-lister Jim Carrey took to Twitter to publicly distance himself from his upcoming movie, the sequel to the hyper-violent kids-as-urban-vigilantes-or-I-guess-"superheroes" movie Kick-Ass. Carrey plays Colonel Stars and Stripes, a new addition to the team helmed by Kick-Ass (Aaron Johnson) and Hit Girl (Chloe Grace Moretz). Carrey's tweet expressed regret that he would be parting ways with his collaborators on the film, but that "I did Kickass a month b4 Sandy Hook and now in all good conscience I cannot support that level of violence." Which apparently means Carrey won't be hitting the publicity circuit for the film, not that he will continue actively speaking against it.

This was followed by a pushback from the author of the Kick-Ass comic book series, Mark Millar, who both expressed incredulity that Carrey wouldn't have had these objections before making the film, but who also defended Kick-Ass and its brand of purposefully excessive violence:

"Kick-Ass avoids the usual bloodless body-count of most big summer pictures and focuses instead of the CONSEQUENCES of violence, whether it's the ramifications for friends and family or, as we saw in the first movie, Kick-Ass spending six months in hospital after his first street altercation."

None of this would seem like good news right off the bat, but comments made by Universal executives at a European film distribution conference this week show that nobody associated with the film is interested in backing down from its violent content. According to The Hollywood Reporter, Simon Hewlett, Universal Pictures International executive VP of marketing, spoke to the CineEurope conference and touted Kick-Ass 2 as a "bigger, badder, more ballsy adventure," going so far as to brag that the film is "irreverent, dark and often offensive."

Previously: Who Are The 5 Creepiest Movie Characters of 2013 So Far?