31 Days of Horror: The VHS Cover for 'Prom Night II' 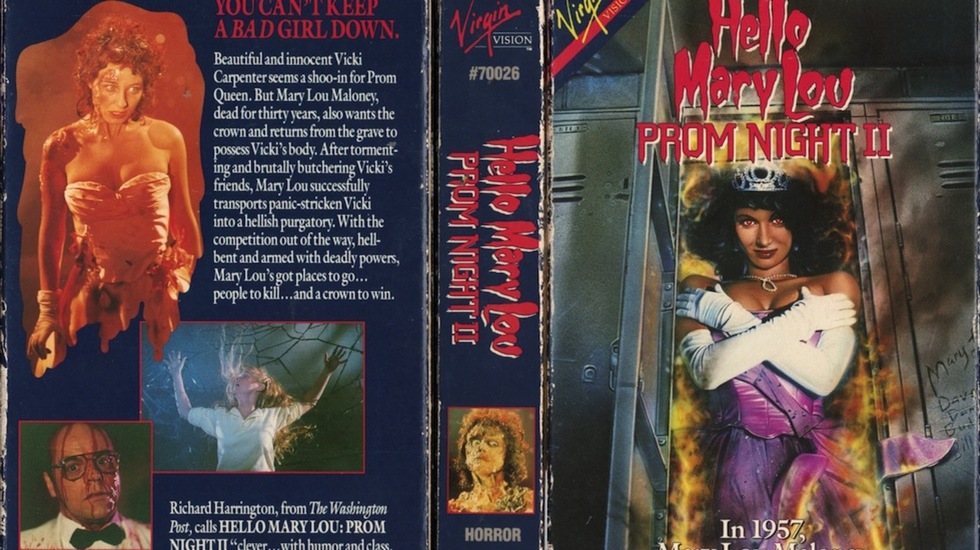 I used to go to the video store at lot as a kid. Before it was a Blockbuster Video, it was a Video Factory, and before that I used to check out 88 Video, which I think was still open the last time I lived in Buffalo. In any case, I would frequent the video store well before I was old enough to rent R-rated movies. And I was a scaredy-cat besides, which meant that the horror section was particularly fascinating for me, full of titles and, more importantly, VHS covers that both scared and compelled me.

In between all the Freddy Krueger and Jason Voorhees and Michael Myers sequels — movies that I may not have seen yet but had heard of — there were more exotic titles with eye-catching images on their covers: Evil Dead 2 and Monkey Shines and Jack Frost, which had a hologram cover that changed from a regular snowman to a demon as you walked past it.

By far, though, my favorite poster was for a movie I have still never seen: Prom Night II, which had the perfectly campy subtitle of Hello, Mary Lou. I didn't know what camp was at that age, but I knew how over-the-top ridiculous both the title and the image on the poster were:

One of these years, I'm going to sit down and watch Prom Night II, and I will find out what Mary Lou's whole deal was. But it will inevitably only disappoint, a pale reflection of the limitless wonders/horrors my imagination dreamt up while I was browsing past that indelible VHS box.