Future Relic And The Art of Film

Daniel Arsham has built a career with work that combines art, architecture, performance, and most recently, film. 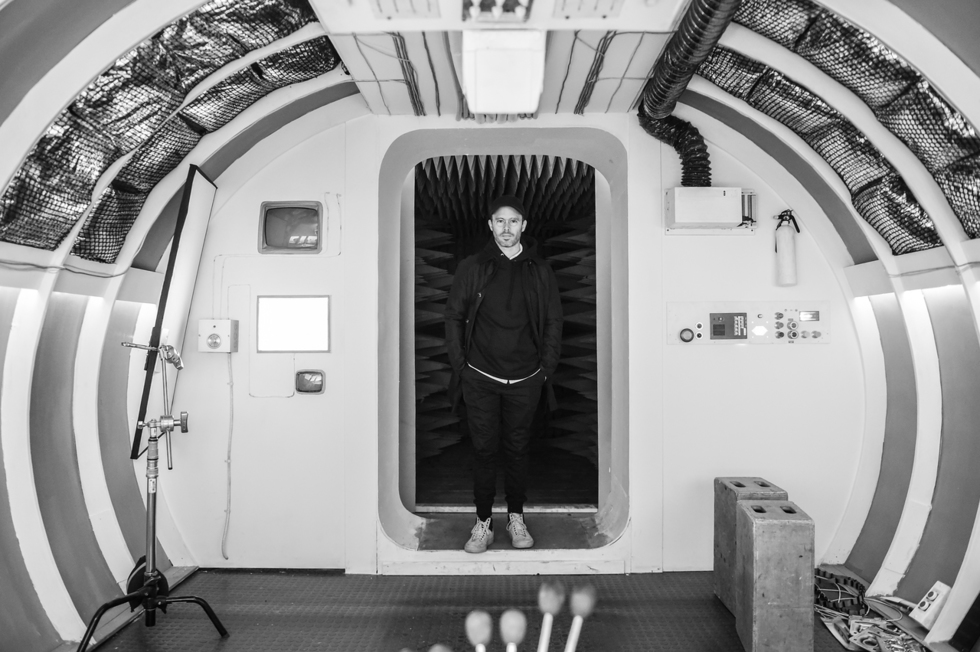 All photos by James Law

“There are artists who exist in the world who will make work for themselves and they might not care whether anyone else ever sees it,” artist Daniel Arsham tells me from the set of his short film Future Relic 04. “That’s not the kind of world that I exist in.”

These days the world in which Arsham exists is filled with notable artistic accomplishments and countless creatives eager to work with him. Last year Pharrell Williams organized an exhibition of Arsham’s work, which included a replica of Williams’s first keyboard, made of volcanic ash. At the recent Armory Show in New York, Arsham’s work appeared at the booths of OHWOW (Los Angeles) and Pippy Houldsworth (London). Arsham’s work can be seen worldwide and he is represented as far as Hong Kong and São Paulo.

Since designing stage sets for acclaimed choreographer Merce Cunningham starting in 2004, Arsham has worked on commissions from Calvin Klein and Louis Vuitton and collaborated with a dazzling number of well-known creatives (some might call them celebrities), including James Franco, Hedi Slimane, Swizz Beats, and Juliette Lewis.

Lewis stars in the third installment of Future Relic, Arsham’s latest project which consists of a series of nine short films. Future Relic 03 will premiere as part of the shorts program entitled "Gallery Opening" at the Tribeca Film Festival (TFF). “Daniel is a beautiful director,” Lewis told me over the phone. “He is one of the best.”

Arsham, who is based in New York, has built a career with work that combines art, architecture, performance, and most recently, film. In 2014 he founded Film the Future, in collaboration with director Ben Louis Nicholas and producer Courtney Andrialis. “I have always found film to be the most accessible of the arts,” Arsham tells me from East of Hollywood Studios in Sunset Park, Brooklyn, where filming is underway for Future Relic 04. “It’s egalitarian and in a sense broadens my audience.”

It is Sunday and while most people are getting ready to watch the Academy Awards, Arsham is on set, and I am behind the scenes to observe the artist as director. In the days leading up to the shoot I have been keeping up with Arsham’s work on Instagram and Snapchat, which he utilizes extensively to share his process directly with his followers.

I have just finished watching a large screen projecting the filming of two pilots played by Matthew Maher and Ethan Suplee. Seated in the cockpit of a futuristic aircraft, the pilots appear to be on a doomed mission as the plane careens through space. Light from outside the windows illuminates their faces as Lee, played by Maher, becomes increasingly wide-eyed and terrified. He gestures wildly at his visibly intoxicated copilot, played by Suplee, who is taking long swigs from a clear flask. The light brightens and brightens before extinguishing completely. WATCH THIS SCENE IN VIDEO BELOW

And cut! Blasting briefly in between takes is, fittingly, a recording of “Highway to the Danger Zone.” The shot completed, Arsham joins me again near the screen that moments ago projected the footage as it was filmed inside the shuttle. “The construction of it took about three weeks but we started designing it six months ago,” Arsham tells me about the set, which was designed digitally and from his own drawings.

To date, Future Relic is a project two years in the making. Devised and directed by Arsham, the series depicts a future civilization at various points before and after a major ecological change on Earth. In the world of Future Relic, nature as we know it today does not exist. Sandstorms sweep across the dunes of a jagged coastline, where glass bottles levitate in the air. The cratered moon hangs in the sky, but with a sizable rectangular section excavated from its surface. Individuals are affected by moon pull, a psychological disorder which is treated by swallowing coin pills, a medication resembling today's currency, albeit white and petrified.

Being a part of the artwork is something that Arsham provides to his audience, using social media to keep his followers connected with his projects

In Future Relic 02, set far in the future, James Franco stars as a lab worker examining technological devices from the twentieth century, such as telephones and cameras. These recognizable media objects are presented as archeological relics – dusty, ash-like and falling apart. Obviously searching for something, Franco systematically analyzes each object before destroying it with a crushing device in the contained laboratory. Finally he picks up a 35 mm Leica camera model, and upon examining it, his pained face breaks into a smile of relief and elation.

Although we do not know what he is looking for, he has found it. The camera is unusable by today’s standards, yet Franco’s character knows its original function. He pantomimes taking photos as “I Love You So Much It Hurts” plays in the background. He moves around the room and lies down on the floor of the laboratory to shoot at various angles and extends his arm to take a selfie, all the while pressing what would be the shutter and making clicking sounds with his mouth.

In terms of a time frame, the sequence of Franco in the lab occurs much later than the fourth installment that I watched being filmed in Sunset Park. Movies are ordinarily shot out of sequence to account for scheduling and location, but Future Relic has been released as it is made, and the complete narrative will become clear throughout the installments. “Part of the interesting thing about this film is I’m teasing out certain things that happen in it,” Arsham says. “There are things that you see before you know their purpose.”

Viewed as a film series, Future Relic constructs the world in which these cast media objects exist. For the past few years Arsham has been creating sculptures of petrified twentieth-century media devices made from a variety of materials including plaster and glass, crushed rock and marble, and gypsum cement. Constructed to look like fragile artifacts, they are covered with tiny crack formations and areas where the surface has crumbled away, disintegrating from disuse and obsolescence. All are cast from technological devices of the twentieth century, sourced mostly from eBay, including mobile phones from the 1990s, old cameras, and cassette tapes. “The choice of the objects is very specific,” Arsham tells me. “I’m looking for things that are iconic that many people would recognize.”

Arsham presented the relics last year in Miami during Art Basel, transforming the gallery space at Locust Projects into a futuristic dumpsite of obsolete media devices.

Viewed as archeological artifacts, the sculptures raise questions about the future of the planet and how civilizations will utilize objects left behind when the speed of technology renders them obsolete. These media devices, possibly forgotten by history, may have been left behind in the destruction following a natural disaster. This is especially pertinent to the delicate ecosystem of Miami, which is not just the location of the installation but also where Arsham grew up. One must wonder, how will future generations view these objects which have physically outlasted the technology they once served?

The nine-part Future Relic enables Arsham to construct a more complete imagining of the environment in which these relics exist. Despite the nature of the project Arsham does not call himself a filmmaker, but thinks of film as an “all-encompassing medium, the culmination of all areas” in which he works. The creation of an environment through film enables artists to work freely with numerous media, providing opportunities that may not be possible in a traditional gallery presentation. For example an art space has only so many controllable variables, whereas film provides all sorts of additional elements, from lighting and viewpoints to special effects. And with film, the artist is free to incorporate art objects that would otherwise be displayed in a museum, such as the sculptural relics. “Watching films as a child,” Arsham explained, “I wished I could own part of it.”

Being a part of the artwork is something that Arsham provides to his audience, using social media to keep his followers connected with his projects. Glimpses into his projects range from behind-the-scenes images to works-in-progress snippets on Instagram and Snapchat. While we were on set I noticed a post on Arsham's Instagram documenting the removal of an aircraft window for a shot of the pilots. Other times he shares what he is currently working on in the studio, such as a series of sculpted human figures made entirely of broken glass. Aside from social media, the medium of film itself broadens the audience, as people in general are more apt to see a movie than a gallery exhibition.

As the process of making a movie is new to Arsham, he works closely with a team of producers and directors who are fluent in film. “I know what I want but I don’t always know the language,” Arsham explains. In this way he is able to execute his own vision while ensuring the technical details by working with a crew. In addition to his Films of the Future collaborators he is also working with director Sam Stonefield, and he wrote the screenplay for Future Relic with Timothy Stanley.

Despite his expert team, it is important to note that Future Relic remains a project envisioned by one person – Arsham. As art director, he is involved in every detail, from designing the set to even suggesting to the actors how they should position and move their heads during filming. According to Ethan Suplee, Future Relic “is all one person’s vision.”

The actors of Future Relic all receive a sculpture from the film, but for actors who appreciate an artist's work, appearing in the film is a way to participate. Lewis remarked that she could talk about the relic sculptures for days. “I hope to do many other things with Daniel,” Lewis said. “I am over the moon and so excited [the film] is at Tribeca.”

It is safe to say we will see many more productions from Arsham and Films of the Future. Future Relic is just the beginning.

Starting April 16 through the 25, New Yorkers and Festivalgoers will be able to walk through our TFF 2015 Artist Awards Gallery at Spring Studios where original works from world renowned artists will be on display prior to being presented to Tribeca Film Festival’s award winners. How cool is that? For this year, we’ve assembled an eclectic and brilliant group of artists, including Daniel Arsham, Prune Nourry and Piers Secunda, whose cutting-edge works reflect the innovation that Tribeca cultivates.