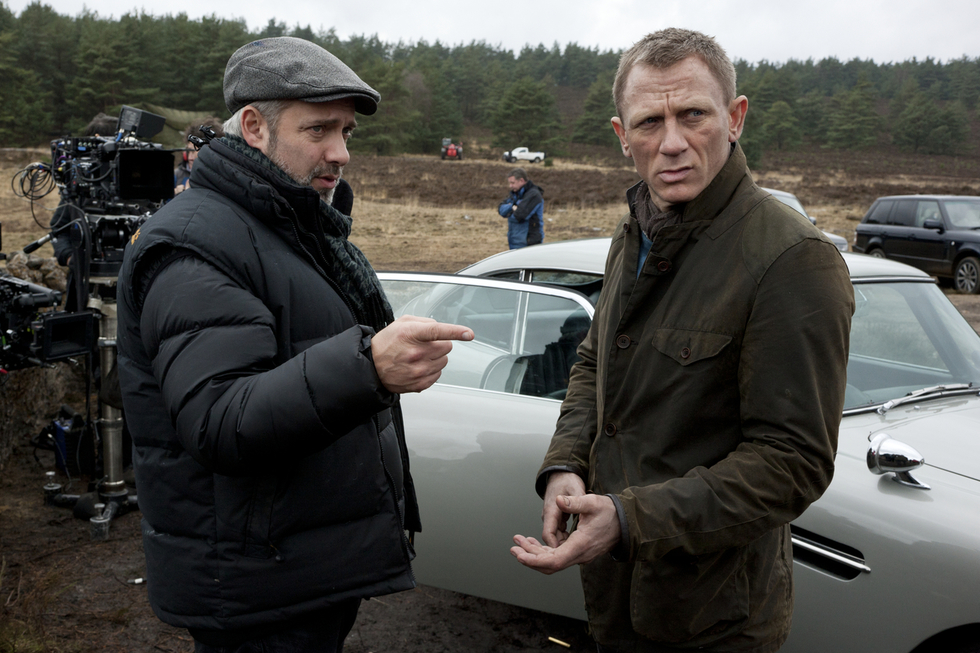 Sam Mendes and Daniel Craig on the set of SKYFALL.

For its latest issue, the awesome English film magazine Empire has invited filmmaker Sam Mendes to be a guest editor. Mendes, of course, is promoting the November 6 release of Spectre, his newest James Bond movie starring Daniel Craig, which will undoubtedly break banks worldwide. And because you don’t bring in a big-time moviemaker and just have him line-edit features and approve photo layouts, Mendes flexed his Rolodex's power and interviewed a who's who list of the film industry’s biggest directors. And it's delightful.

The questions are all pretty routine, but the answers—coming from Steven Spielberg, George Clooney, Steven Soderbergh, David Fincher, Joss Whedon, and more—range from the hilarious to the intriguingly weird. Check out a few samples below, and head over to Empire to read the full questionnaire.

WHAT IS THE MOST COMMON PHRASE YOU USE ON SET?
Paul Greengrass: "Fuck the script/lighting/extras etc., let's shoot!"
Ang Lee: To actors, "Can you close the gap between sentences?"
Joe Wright: "Beautiful. One more."
George Clooney: "What time is lunch?"
Sofia Coppola: "Okay, great, let's do it again.”"
David Fincher: "Shut the fuck up, please."

WHAT ARE YOUR ON-SET RULES FOR THE CREW, IF ANY?
Fincher: We are not here to witness, but to participate.
Christopher Nolan: No phones. No phones. No phones.
Roger Michell: Think ahead. Be kind. Skip lunch. Go home early.
Susanne Bier: No smoking. No small-talk. Always deliver bad news  with a smile and a joke. Also, no smoking.
Alexander Payne: No "rules." What are you, British or something? I guess I'm too nice… No wonder people take advantage of me.
Steven Soderbergh: No open-toed shoes.

HOW MANY CUPS OF COFFEE A DAY?
Steven Spielberg: I never had a cup of coffee in my life, but I have at least a dozen cups of mint tea a day.
Wright: Way too many, hence the beta-blockers. I met my last assistant when she was working as a barista so we had an espresso machine in my office—that was dangerous.
Alfonso Cuarón: No coffee. Green tea in the morning, white tea in the afternoon. Far too many.
Joss Whedon: Only tea, 'til Age Of Ultron, where I got hooked. Even then, one or two. With tea in-between. Tea I can swill all day.
Soderbergh: Never had a cup of coffee in my life. Dr. Pepper is my caffeine delivery system of choice.
Wright: Way too many. Once I had a potentially heart attack-inducing eight double espressos in one day. I think my assistant secretly swaps my coffees for decaf as she doesn’t want me to die of caffeine overdose.

REAL EXPLOSION OR CGI EXPLOSION?
Payne: Never done an explosion, but I have had explosive diarrhea, and that was very, very real.