The iconic but oft-misunderstood and unfairly scrutinized filmmaker is the subject of a great new documentary screening tonight at the New York Film Festival. 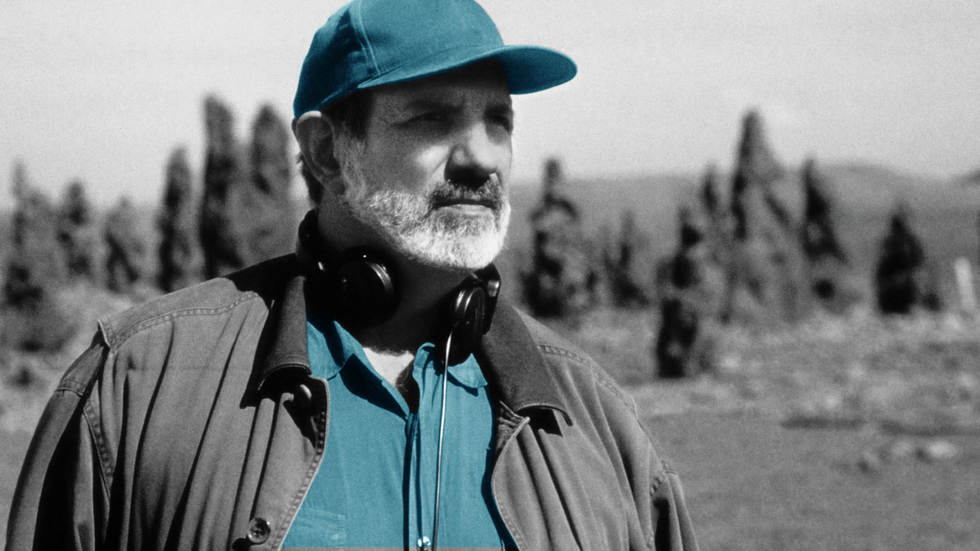 "It's wonderful when you see everyone make all the mistakes that you avoided."

It's equally wonderful to hear a filmmaker speak with that kind of candor. Which is why the documentary De Palma, co-directed by Noah Baumbach and Jake Paltrow, is one of this year’s New York Film Festival’s best inclusions, and a must-see for any self-respecting cinephile. The man of the hour-and-48-minutes is Brian De Palma, the notoriously polarizing genre master who’s directed some of the most striking thrillers and crime films of the last 30 years, including Sisters (1973), Blow Out (1981), Scarface (1983), The Untouchables (1987), and Carlito’s Way (1993). De Palma allows the now-75-year-old filmmaker to reflect candidly on his 28-film career, without any extra talking heads or distractions—it’s just him sitting in a chair inside Paltrow's NYC apartment, the camera holding on a one-shot, and De Palma rifling off previously untold anecdotes, insightful making-of analyses, and the occasional scathing dart.

That above quote falls, of course, into the latter category, and it comes during De Palma's section on the director's 1976 adaptation of Stephen King’s Carrie. For horror fans, it's one of Baumbach and Paltrow’s doc's high-points, punctuated by how much happiness De Palma finds in knowing that all of the subsequent Carrie pseudo-sequels and misguided remakes have only made his version that much more beloved.

For De Palma himself, it's a well-deserved moment of shameless posturing. Throughout the 1970s and '80s, he was constantly belittled as a blatant Alfred Hitchcock wannabe; Sisters, Dressed to Kill (1980), and Body Double (1984) have retroactively been embraced as psycho-horror classics, but only after numerous years' worth of being scrutinized as Hitchcock rip-offs rather than the loving and self-aware homages De Palma intended them to be.

With De Palma, Baumbach and Paltrow have given their old friend, with whom they meet regularly in New York City for shop-talking dinners, a fitting, idolized tribute that enables its viewers to revisit De Palma's work and appreciate the Newark, NJ, native's greatness as his own kind of auteur. Hitchcock was never audacious enough to pull off the split-screen madness seen in Carrie and Sisters; Hitch wasn’t sadistic enough to stage murders of women in Dressed to Kill and Body Double that rival the death scenes in Italian nihilist Dario Argento’s horror flicks.

De Palma’s posturing finds an unlikely target during the doc’s Scarface recollections. Cinema buffs will get a kick out of seeing photos of De Palma’s old pal Steven Spielberg looking like a kid on Christmas morning while hanging out on the film’s set during the epic one-versus-many, “Say hello to lit-tle friend!” climax inside Al Pacino’s Tony Montana’s mansion. Rap music lovers, on the other hand, will cringe upon hearing De Palma’s negative reaction to how the hip-hop community has adopted Scarface as its unofficial aspirational movie of choice. De Palma mentions how, years back, Universal executives asked his permission to let them record a modern all-rap soundtrack for the film, an idea to which he responded, "Absolutely not." As he makes clear, De Palma isn’t what you’d call a "hip-hop head." Whereas Al Pacino has openly thanked the culture for giving Scarface a whole new life, De Palma seems bothered by the film’s hip-hop reputation.

Because of his nothing-to-something rise, Tony Montana has evolved into an inspirational figure for rappers who, too, have emerged from street corners to forge global empires. There’s a direct line to be drawn between Montana and Jay Z, who, similar to Scarface’s ascension from Cuba to Miami, hustled his way out of Brooklyn’s Marcy Projects and right onto the top of Forbes magazine’s yearly lists. Baumbach and Paltrow accentuate the comparison by showing a clip from Mariah Carey’s "Heartbreaker" video, the one where Jay Z raps his guest verse while lounging in a decadent hot tub and doing his best Tony Montana impersonation.

De Palma’s filmmakers also connect Scarface to Nas, specifically to the Queensbridge rap legend's 1994 single "The World is Yours" by showing footage from the track’s black-and-white video. The song’s title directly winks at the Scarface scene in which Tony sees those four words brightly lit on a passing-by blimp, an iconic moment in cinematic history that undoubtedly left major impressions on current hip-hop royalty like Sean Combs, the aforementioned Jay Z, and Texas rap god Scarface, whose chosen rap moniker says it all.

The second, "It's Mine," features none other than Nas, and comes from Mobb's Murda Muzik album (1999):

One can only imagine De Palma’s response after hearing those two songs.

Another filmmaker who’s factored heavily into Nas' music? Martin Scorsese. Think back to how Nas remade Scorsese’s Casino for his "Street Dreams" music video in 1996. In that clip, Nas assumes Robert De Niro’s role of Sam “Ace” Rothstein, walking towards the car that’s ready to explode on the twist of a key in its ignition. To that end, De Palma provides a much-needed reminder about one of cinema history’s most wrongly believed origin stories.

The popular layman's thought is that Robert De Niro owes his career to Martin Scorsese, the fellow New Yorker who put the then-unknown actor in his mutually career-establishing 1973 film Mean Streets, which led to The Godfather and every other Marty-and-Bobby collaboration to come. But that layman is misinformed; De Niro’s biggest debt of gratitude goes to De Palma, who cast in his made-for-nothing, black-and-white DIY film The Wedding Party. Released in 1969, The Wedding Party was actually shot in 1963, and De Niro’s performance in it motivated De Palma to cast the young scene-stealer in his next project, the equally handmade anti-Vietnam character study Greetings.

In those days, De Palma and Scorsese were close friends, anchoring a loyal group of budding filmmaker comrades that also included Steven Spielberg, George Lucas, and Francis Ford Coppola. They'd frequently recommend actors to one another, like when Lucas suggested De Palma take a look at Amy Irving for Carrie, after she’d auditioned for his Star Wars. Thus, without The Wedding Party and Greetings, De Niro may have never landed that pivotal Mean Streets part. And, in turn, wouldn’t have made Taxi Driver, Raging Bull, Goodfellas, and Casino with Mr. Scorsese.

And, gasp, come to think of it, there also wouldn’t be a Tribeca Film Festival.

For that, we thank you, Brian De Palma. Hate on rap music as much as you'd like—we won’t hold it against you.