At the intersection of movie trailers and music, what does the classic Gnarls Barkley tune "Crazy" tell us about Alejandro González Iñárritu's upcoming flick? 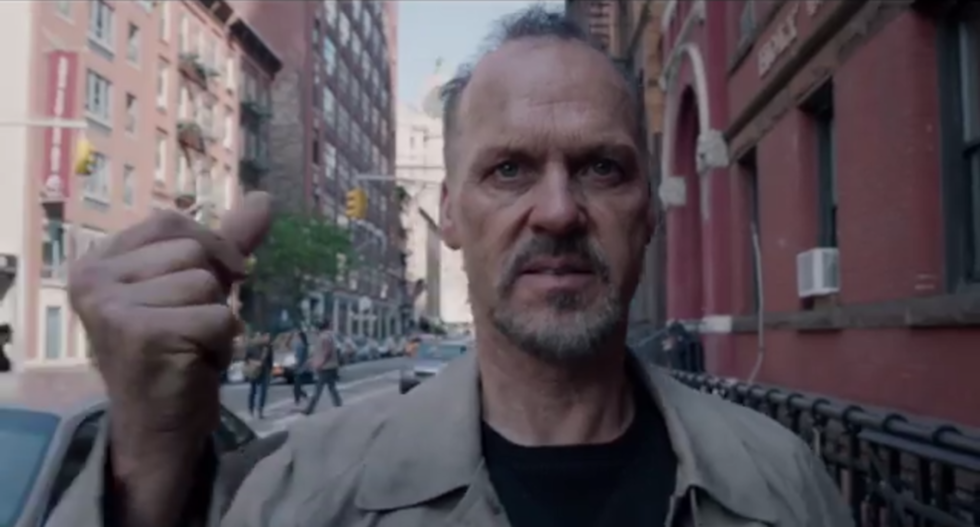 This Week's Trailer: A teaser for Birdman, an honest-to-god comedy from soul-crushing tragedy peddler Alejandro González Iñárritu, whose movie Babel spent three hours showing kids getting lost in the desert and Cate Blanchett getting shot in the neck. This time around, he lightens up with a movie starring Michael Keaton as a has-been actor who used to play a superhero, but now wants to revive his career with a Broadway play. If the irony of casting Keaton in this role doesn't tickle you enough, then consider that his costars include Emma Stone, Edward Norton, Zach Galifianakis, Amy Ryan, and Merritt Wever. (The movie arrives on October 17.)

This Week's Tune: An alternate version of Gnarls Barkley's "Crazy." That's still Cee-Lo singing, but he's in slow-jam mode, and the fly-ass beat of the original has been replaced with a dreamy trip-hop wash.

How Literal Is It? Both Keaton and Norton's characters seem touched, especially in that wrestling scene, so a song called "Crazy" is a good fit. But otherwise, this soundtrack is more about mood than blunt storytelling.

How Emotional Is It? The track creates an alluring sense of discord. As we watch these obviously comic characters do over-the-top things, often in their underwear, it's jarring to hear the dreamy-spooky music underneath. It gives the slapstick a surreal edge, as does the shot of a comet streaking across the sky and the pile of dead whales (fish?) rotting on a beach. You have to wonder which attitude will prevail---the loopy or the creepy.

Meanwhile, the trailer teases people who know the original version of "Crazy." At :42, we hear the familiar opening beats, and we prime ourselves for the hotness to begin. But then… no! The clip reverts to the alternate take. That's a great way to toy with our expectations, and it implies the movie will take unusual turns.

How Definitive Is It? "Crazy" was one of the biggest hits of 2005, so no trailer can ever really "own" it, but I don't recall hearing this version before. That means Birdman gets to make us reconsider a familiar tune. Way to get our attention, gang!

Overall Trailer Tune Effectiveness: After suffering through the pretentious twaddle that was Biutiful, I swore I'd never see another Iñárritu movie, but this trailer is so impressive that I'm forced to change my mind. The clever use of "Crazy" only underlines the suggestion that the film has a distinct point of view, and I want to see what's up.