A chat with Gabe and Mike of Uzi, whose video 'Scene Girls' simultaneously reminds me of my youth and feels like the next new thing. 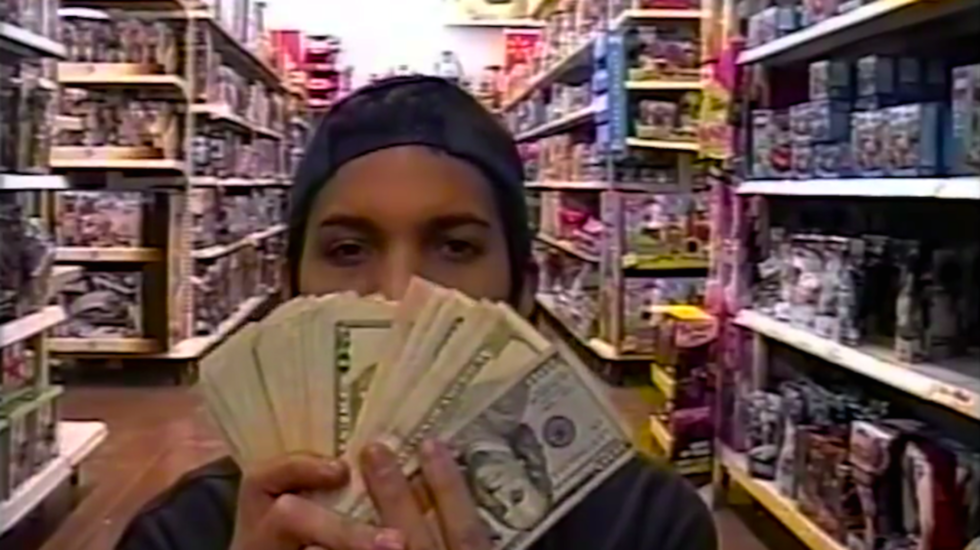 I’m not the only one who’s intrigued by these guys: well-established taste makers like Been Trill and Kid Cudi have already collaborated with this spookily young duo. Playfully juxtaposing classic music video tropes (piles of cash, cars, girls) with Walmart interiors that look like gritty homages to Andreas Gursky, Uzi’s style of shooting feels like a pitch-perfect response to a 1990s/2000s suburban American childhood.

Jess: Tell me a little bit about yourselves. What’s the story of Uzi?

Gabe: We met during college, in Ohio. This was like, 2009-2010. We were playing shows and doing a bunch of local stuff, but as musicians when you're living in a small town there's always that curiosity of wanting to go to LA or New York.

Jess: So it was moving to LA that started your careers, even though this video is a story of the ‘burbs.

Gabe: When we got to LA, we realized that there were, like, a million struggling musicians walking around everywhere and no one would care if we were just like, "Yo, we make this dope music! Blah, blah, blah!" So we picked up a camera because we saw a huge need for that in the music community and we just started filming all these music videos for the artists. Eventually Kreayshawn got a hold of our stuff and from there, we were kind of always in the mix.

Jess: You told Complex something that interested me — that you shoot on VHS because it just looks better.

Gabe: It's the nostalgia. VHS is like looking through a lens inside of a filter that you grew up with, it’s bringing the quality of video that you grew up watching to modern day. It's like "Oh, I'm glad this isn't extinct."

We wanted to use locations that would really resonate with people. We shot in Taco Bell, Walmart, suburbia.

Jess: I'm probably about five years older than you guys, but, I feel like you’ve hit on something really poignant in playing with the cues of VHS. You use captions a lot, date and time stamps, sometimes accurately sometimes inaccurately. The ultimate effect is a bit other-worldly; it’s using something that's meant to communicate time and it ends up communicating timelessness.

Gabe: That's a really good way to put it. I switch it up, sometimes I use them, sometimes I don't want people to even know it's VHS that I'm shooting.

If I'm in a room and I say "Oh, this Ke$ha song is dope!" everyone just kind of looks at me.

Jess: Tell me about “Scene Girl” and what the song and video means to you.

Gabe: We wanted to make a song that had pop textures, but for kids that knew what was going on. In our age bracket it feels like everyone is so overly extravagant; everyone is so afraid to admit that they like something common like Top 40 hits. If I'm in a room and I say "Oh, this Ke$ha song is dope!" everyone just kind of looks at me.

Mike: I’m always writing riffs on whatever instrument: a guitar, piano or a piece of software like Logic Pro. I have a library of songs and beats that I’ve written over the years. I’m constantly ‘writing’ in my head all day all night; Gabe picks what he likes and we go from there.

Jess: What’s the story of the video?

Gabe: We wanted to use locations that would really resonate with people. We shot in Taco Bell, Walmart, suburbia.

Jess: I love that you shot in suburbia.

Gabe: It's an underrepresented setting, especially in rap music. We wanted to utilize it since we have a New York following and an LA following and we liked the idea of showing them what it's like in the Midwest. We shot in Walmart using the cart as a slider and sliding down the aisles. We like shooting in reality, opposed to a closed-off, organized thing. Why would I hire an extra to walk through Walmart when we could just have the people who are actually walking through Walmart?

Mike: Yeah. To me, a scene girl or guy is someone who presents themselves online as something more than they are. Everyone has a “brand” these days; everyone has a music video these days, including my grandma.