The acclaimed British filmmaker and his A-list leading man discuss their new dystopian thriller, which had its New York premiere at Tribeca 2016 and opens in theaters this Friday, May 13. 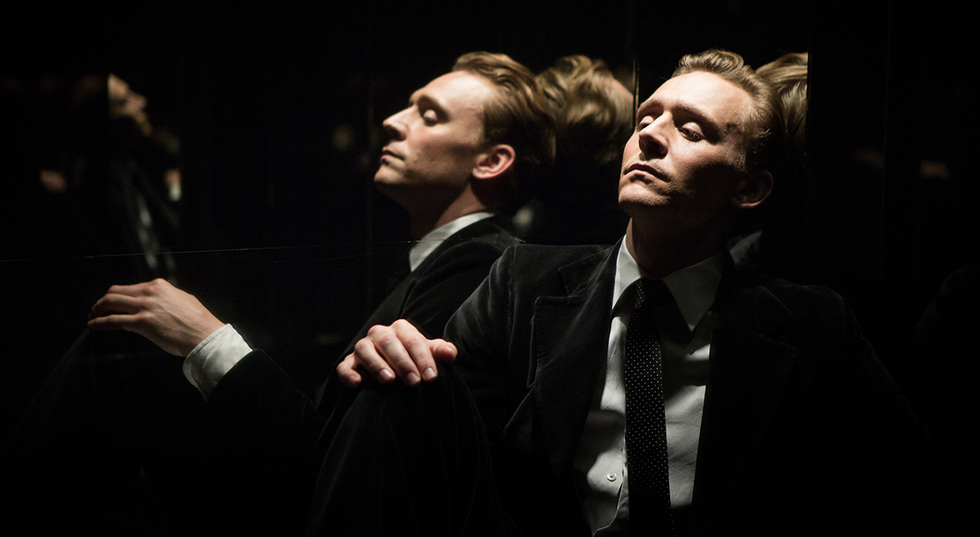 Largely recognized for his Shakespearian portrayal of Loki in Marvel's Avengers and Thor franchises, Tom Hiddleston turns genre archetypes into deeply felt, touching, and yet mysterious individuals. Because of that particular skill set, he has worked with some of popular cinema's best filmmakers, including Woody Allen (Midnight in Paris), Guillermo del Toro (Crimson Peak), Jim Jarmusch (Only Lovers Left Alive), and Steven Spielberg (War Horse)—and now he can add Ben Wheatley to that impressive list.

Timed nicely with his leading role on the AMC miniseries The Night Manager, which recently premiered as part of Tribeca's Tune In program, Hiddleston stars in British cult-film director Wheatley's fifth feature, High-Rise. The English actor plays Laing, the film's stoic narrator whose outward calm subtly disintegrates as chaos ensues all around him. Wheatley has a knack for unsettling audiences with worlds that are horrific and absurd, enclosed and anarchistic, doomed and uncertain. It's no surprise, then, that he was drawn to J.G. Ballard's 1975 novel High-Rise, a dystopian portrait of class warfare depicted through an apartment building thrown into mayhem after its basic amenities break down.

For years, Wheatley and his wife/creative partner, Amy Jump, had been hoping to adapt a book but repeatedly ran into obstacles. With High-Rise, they finally hit upon strong source material that wasn't already being adapted into a film. "[Amy and I] look around at what's going on and float out ideas," says Wheatley. "We've long been looking at books to license and adapt. In the past, we've gotten nowhere with other books. I was sitting at home and suddenly saw High-Rise on the bookshelf. We were told that Jeremy Thomas had the rights; he's a legendary super-producer who did Crash, Sexy Beast, and Naked Lunch. It was a quick route to contact him. Within just three days, we were talking."

Initially read as just a piece of pulpy entertainment, Ballard's text had taken on a deeper resonance over time. "I was attracted to the book because I read it as a teenager and enjoyed it then as science fiction," says Wheatley. "But when I re-read it as an adult, a lot of it had come true, and it was becoming more prescient. It wasn't just looking at a future that might happen—it was already happening around us. I thought that it was a story that should be told."

For Hiddleston, High-Rise's principle attraction was Wheatley, a director he has long respected. "I loved Ben's films," says the actor. "I really enjoyed the ones I had seen before I met him, which were A Field of England, Sightseers, and Kill List. I knew Jeremy Thomas, because he produced a film of mine: Only Lovers Left Alive, by Jim Jarmusch. Jeremy and I had talked about High-Rise before, but it wasn't until I knew Ben was directing that I got excited. The combination of Jeremy, Ben, and Ballard was a very exciting prospect because all of their tastes are very sophisticated and mature. They're fearless and unapologetic about following their curiosities."

To prepare for his his role, Hiddleston dug into the source material as well as the screenplay's intellectual inspirations. "Ben, Amy, and I talked a lot, because I wanted to make sure to sync up with their tone," says Hiddleston. "I like doing all different things, but I need to know what the ball park is. If there are rules, what are they? What are the parameters so I can get a sense of how I fit in the whole thing? We talked about the things they were thinking about, films they enjoy, and books they were reading, on politics, psychology, and all subjects. I read the book and Ballard's autobiography, and then I became fascinated by Ballard's curiosity for anatomy. He had chosen for Laing a profession of physiology; he's a medical practitioner who can deconstruct anatomy and detach himself from the biomechanics of how we are made. [Ballard] had done that himself as a student before he became a writer. He also talks about the building possessing a sickness so that it becomes a huge corporate body. That was an intellectual curiosity for me."

"Ben and I talked a lot about Laing's desire for anonymity," he continues. "There's something removed about it; he has no dependents and occupies exactly the middle of the building. He's courteous enough to get along with the people above and below him. He's moved into the building to get away from the real world. He has this detachment as a medical practitioner. Somewhere in there, Laing emerges. He's responsible—that's part of his professional obligation—but he's also a man with appetites, feelings, and an off-duty life. [I was] experimenting with how and when he loses control, for someone so controlled, and how the chaos of the building challenges that control. He's the entry point in the novel as the most immediately accessible character. But he's complicit in the building."

"The building is like a buffet, and he's trying little bits," says Wheatley about Laing. "He's going, 'Do I enjoy gratuitous violence? I'll stick to sleeping with other women's wives.'"

That kind of subversion isn't exclusive to Hiddleston's character in High-Rise. None of the building's residents are quite as they seem. "They're all archetypes that you think you know, but they slip out of your fingers right when you think they'll do the thing they usually do in narratives," says Wheatley. "With Wilder [played by Luke Evans], when you think he'll be like in Die Hard and climbs up through the vents and save everyone, he instead fails and assaults and rapes Charlotte [played by Sienna Miller]. You think, 'Well, I liked him, and I liked her—what are we going to do?' It's a massive disappointment for the audience. With Laing, you think he'll be the scientist who turns up and explains everything, but he doesn't manage it; he's not going to help you. The automatic narrative investment that you put into it as an audience member, Ballard cruelly crushes each time."

Wheatley does much of the same with his films, disturbing viewers with an inability to establish fixed connections to the story and its players. But he hadn't tested his limits with sensuality as a director until High-Rise, which features intense sex scenes and gamely plays on Hiddleston's unavoidable sex appeal. "We're all slaves to the script," says Wheatley. "I have to witness the film's actual physical making in the room, which is an extreme experience even if I don't have to get my clothes off. When I'm sitting there with your wife, it's equally as extreme to have to edit the most explicit scene I've ever done. My admiration for actors is generally through the roof, but in terms of performing sex scenes especially. Some things are an act and others are physiological facts. [Sex] cannot be performed—it just is. Keeping control over that is an incredible skill. At that moment, you see how far everyone will go in the service of making the film."

Laing is called "the best amenity" by the women who have slept with him, and Hiddleston shot several scenes in which his body is on full display as an object. "They're not easy scenes to film," says Hiddleston. "[Laing] actually feels saddened by [his objectification]. He didn't realize he was basically being used. There's a fascinating scene in the book, which I wanted to recreate, between Laing and Charlotte, and I'm paraphrasing here: 'Laing knew that their relationship would end rather than begin with their first sexual act. The materials they would exchange were far more uncertain materials, of the erotic and perverse.' This sexual language is in the book's DNA. The inhabitants are surrendering to their appetites, to territorialism, tribalism, jealousy, greed, and lust. Everyone in the building is affected by a renewed sense of those urges. To shy away from that [in the film] would have been dishonest."

High-Rise opens in theaters Friday, May 13, via Magnolia Pictures. In New York City, it's opening at the Landmark Sunshine Cinema; click here for tickets and showtimes. High-Rise is also currently available on VOD. Check out the trailer below: