Journalist and filmmaker Jose Antonio Vargas on why we need to talk about race and being white in America. "White People," which airs on MTV on July 22, will be presented as part of MTV’s Emmy-winning Look Different Campaign. 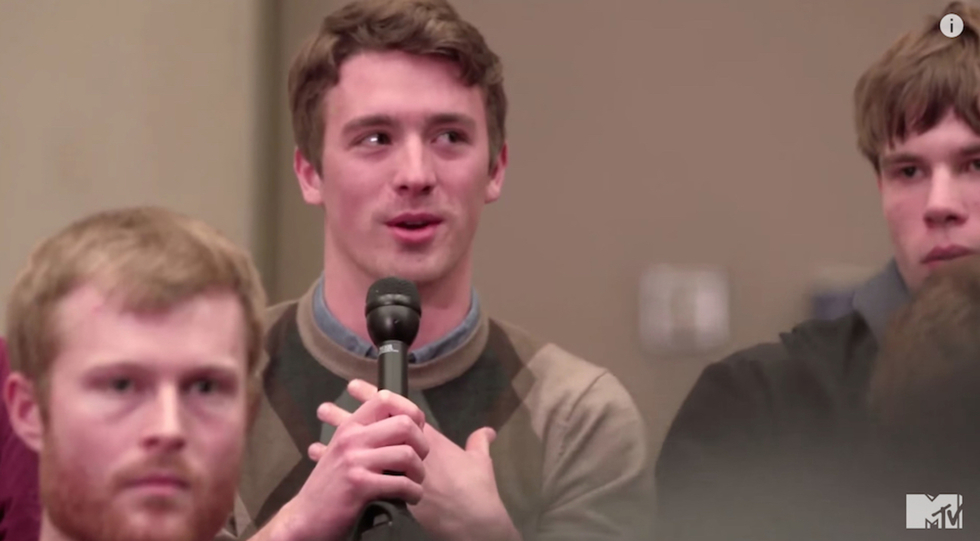 Toni Morrison once used the following metaphor to describe the inconspicuousness of whiteness: It is like a fishbowl, she remarked. Containing fish and water, the serene bubbles, the specs of food and waste, and the flick of the scales. “Suddenly, I saw the bowl, the structure that transparently (and invisibly) permits the ordered life it contains to exist in the larger world,” she explains. Like Morrison before, the new documentary White People attempts to show how whiteness provides the context for meaning-making in the United States and sets the standards against which all racial groups are measured. Whiteness is invisible as a constraint because we keep concentrating on what’s inside the bowl, the water and the fish, rather than the bowl itself. With his new film, Pulitzer Prize-winning journalist and filmmaker Jose Antonio Vargas hopes to shine a light on the fishbowl we have been living in.

In his latest documentary, Vargas travels across the country to talk to whites about race and pushes them to unpack their own whiteness. “Until we understand whiteness as a social construct, we cannot have honest conversations about race and racism,” he tells Tribeca. “I look at where we are now in the era of Black Lives Matter, at a time when Latinos are the largest minority group, and Asians are the fastest growing racial and immigrant group…This question of what is white and whiteness and white privilege and the role that white Americans play in the racial conversation, I cannot think of a bigger conversation than what does that mean?”

The film follows Vargas as he attempts to grapple with the question of whiteness by delving into the lives of five white millennials and their issues with discussing race, racism, and white privilege. Inviting young people to speak about whiteness, Vargas also gathers groups of college students, mostly white, to engage in conversations about their lived experiences. Vargas says his goal as a journalist and filmmaker was to create a space where people can actually talk openly and have a genuine dialogue. “It seems so simple,” he says,“ yet in this very hyper-partisan noisy age of ours it almost seems revolutionary. People talking and trying to understand where they are coming from and filming it.”

Vargas begins the film by asking a group of white students a question that many people of color are tired of hearing, “What are you and where are you from?” Students struggle with the question and respond simply with “white.” When pushed to explain what “white” means, a young man responds, “white is the default. It’s the default race.” In this initial scene we witness the difficulty whites experience when speaking about white identity and the inability of most whites to even see themselves as part of a racial group. “In many ways, to be white in America is to not explain anything,” Vargas says. As a result, whites come to understand and see “white” as the standard, the essentialized default (read American), everyone else is the other.

Vargas urges whites to think about what their lives would be like if they weren’t white and points to the fact that in the U.S., the average white person’s community is over 75% white and their friends are over 90% white. The film highlights that most whites in this country live in a bubble of whiteness, in which they rarely interact with or form any meaningful relationships with non-whites. This isolation and sense of racial neutrality and objectivity shields whites from even having to think about race in a significant way and conversations about race often preserve their sense of comfort. Consequently, many whites find discussions about race that seek to question and challenge white privilege and institutional racism to be emotionally draining and uncomfortable, while completely ignoring their privilege to not have to think or talk about racism and it’s impact on communities of color.

Comedy duo Keegan-Michael Key and Jordan Peele once joked that the word “racist” is the N-word for white people. “Nothing else works. Cracker didn’t work, honkey didn’t work, old fang, whatever that means, didn’t work,” they quipped. We laugh because people of color understand all too well the caution and defensiveness of many whites when trying to engage in conversations about race. During the film, we see young whites utter phrases such as “I’m trying to be careful,” and “I don’t want to offend people,” or “I don’t want to say the wrong thing.” The theme of discomfort is prevalent during the film and at times students are brought to tears trying to explain their thoughts on what it means to be white.

For Vargas, whites’ discomfort when speaking about race and racism is a necessary step towards achieving a more just society. “We’ve been told that millenials are the most fair-minded and inclusive generation in this country, yet they are still uncomfortable talking about race. I feel like we are where we are when we talk about race because we have had conversations that are too comfortable” he says. Nevertheless, all whites interviewed in the film said that they felt comfortable speaking to someone of a different race. In fact, most said they don’t see race at all. “Half my friends are Black and it’s totally normal, one young white woman says. “I don’t give a shit about different colors, different races,” a male student protests. “I could care less what race someone is. I was never taught to really notice it,” a white student declares.

The film underscores the fact that three out of four white Americans today ascribes to the notion of color-blindness and believes we would be better off if we never acknowledged race. Colorblindness is the the idea that the best possible way to end racial discrimination is by treating everyone as equally as possible, without regard to race, ethnicity, and culture. At face value colorblindness seems like a great solution, one that embraces Dr. Martin Luther King Jr’s call to judge people on the content of their character rather than the color of their skin. However, in a colorblind society, white people, unlikely to experience disadvantages due to race, can easily ignore racism in American life and feel more comfortable with their privileged standing in society, thus upholding the current social order.

People of color, however, who regularly encounter strains due to race, experience colorblind ideologies in drastically different ways. Colorblindness creates a society that denies their negative racial experiences, cultural heritage, and negates their unique viewpoints. “This colorblindness thing, where I don’t want to see color has lead us to where we are now,” says Vargas. He believes colorblindness feeds into the myth of a post-racial society and instead of ignoring race as if it doesn’t exist, we should be forcing ourselves to acknowledge the importance of race in American society. “I think we need to have as many difficult, uncomfortable conversations about race in our own families, with our own friends, with our own coworkers."

During the film Vargas encourages whites to embrace their discomfort. “It’s ok to be uncomfortable” or “don’t be careful, it’s ok,” he tells them. For Vargas, he believes the difficulty most whites experience when trying to talk about whiteness stems from a sense of denial and self-imposed guilt. “When we say the word privilege, white people assume that we mean to make them feel guilty about something or that we are trying to take away something. When really for me it’s about acknowledging that we are a country that said African Americans are three-fifths of a man…that was in our DNA. You can’t tell me that is not connected to the incarceration and imprisonment of Black men in this country or the education system in this country,” he says.

Although the film has yet to air, the trailer has garnered nearly two million views on YouTube and has received backlash from some that see it as too focused on whites or as a project intended to shame white people. Vargas admits that he expected the criticisms and that above all his goal was to make a film that could serve as a catalyst for difficult conversations that he believes are essential. “This is not about making white people feel guilty. This is not about shaming people. This is about having an understanding that what is happening today is completely and absolutely inescapably related to the past and how that was shaped, and how it shapes us now,” he says.

While Vargas acknowledges the need to tell the stories of more marginalized groups, he is primarily concerned with how white people view themselves within the contemporary American racial framework. In many ways, Vargas believes people of color understand whiteness better than whites do and is interested in investigating how whites see themselves in an increasingly diverse America. “The country is only going to get more Latino, more Asian, Blacker, Gayer--more gay people will continue to come out, women will break every barrier they must break--they will lean in in as many ways as they can, all of that is inevitable, diversity is our destiny,” he says. “So really, the question is, how are straight white males going to deal with what is inevitable? That to me is one of the biggest, if not the biggest question facing American identity today.” In this sense, the response to the trailer underscores why Vargas feels this project is so critical, especially at a time when we are experiencing systematic violence against people of color. “Systemic and institutionalized racism is ingrained in this country and I think what we are seeing in the initial response to the trailer is how uncomfortable it is to talk about that and make white people be a part of that conversation,” says Vargas.

White People, which airs on MTV on July 22, will be presented as part of MTV’s Emmy-winning Look Different Campaign, which aims to challenge our implicit biases and combat microaggressions. MTV hopes the campaign, which includes a combination of on-air and digital content, plus social media, will help to “accelerate the fight against racial, gender, and LGBT inequality,” according to a press release.

Vargas will continue to promote conversations about race in his new partnership with the Los Angeles Times. #EmergingUS , a digital magazine, which launches in the fall, will address race, immigration, and identity in multicultural America. The magazine will include a section titled “white people,” which will explore what it means that whites are an emerging racial minority in the United States.

Although Vargas’ documentary does not offer a comprehensive analysis of white supremacy in the United States, it does serve a starting point for more in-depth discussions about race and provides a common language for talking about issues such as racial privilege, institutional racism, and the legacy of slavery in the United States. “I don’t think we as a country have really fully grasped and grappled the fullness and the ugliness and the beauty of our own history,” says Vargas. White People seeks to push audiences to have this conversation.