One of the most fearless figures in film history stopped by Tribeca 2016 to discuss her continually evolving career behind the camera. 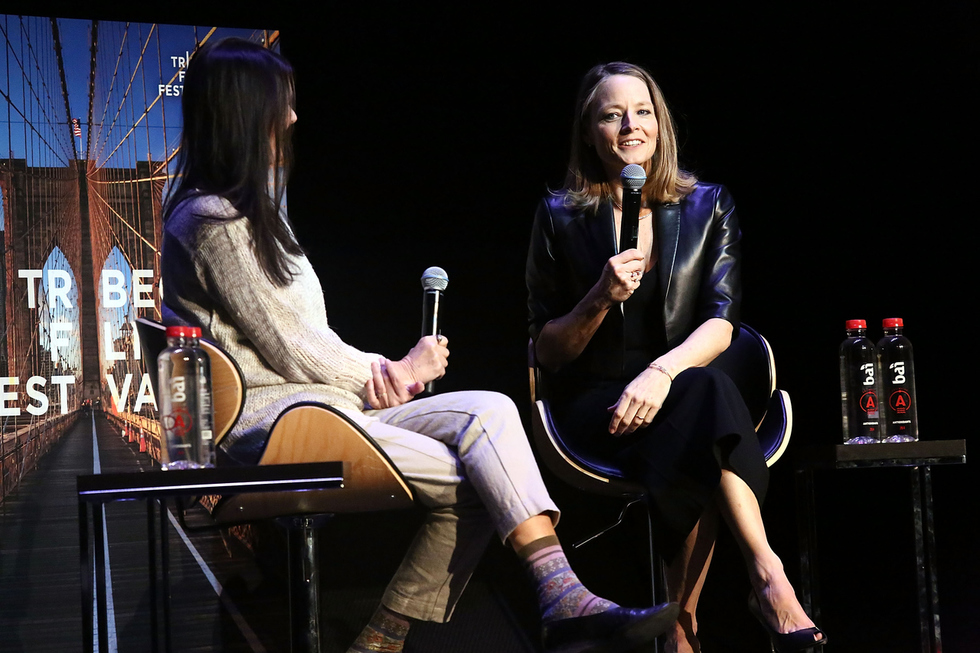 Few artists can claim such enduring iconicity as the actress who stared in horror at Travis Bickle's vengeful revolver only to pick up the pistol herself fifteen years later as the stouthearted Clarice Starling.

The two-time Best Actress Oscar winner's current passions lie strictly behind the camera. (She hasn't acted in a film since her divisive turn in Neil Blomkamp's 2013 sci-fi flick Elysium.) During yesterday’s Tribeca Talk, part of the Festival's Directors Series, Foster renewed those directorial ambitions. In conversation with the brilliant Julie Taymor, Foster discussed the chapter in her career that seemed closed after two low-key directorial gigs in the early '90s: 1991's Little Man Tate and 1995's hysterical, heart-stirring, and wholly underrated Home for the Holidays.

In the past few years, Foster has made a new name for herself as an Emmy-nominated director of TV dramas like House of Cards and Orange is the New Black. She’s now set to transfer those experiences to her fourth feature film, the upcoming Money Monster. A financial drama in the vein of Dog Day Afternoon, Money Monster centers around a loudmouthed Wall Street insider (George Clooney), his crisis-managing producer (Julia Roberts), and the unhinged investor (Jack O'Connell) seeking retribution for some shady advice.

Foster described Money Monster, which will premiere out of competition at this year's Cannes Film Festival, as "a character drama" set in an unsettling time of depersonalized digital relations; the film’s three leads experience "a spiritual crisis about their own lack of worth." She detached Money Monster from any overriding political meaning and clarified that she was more influenced by technology and the ways it’s brought us together and apart, claiming, "There's something we've lost." She then stopped herself, grinned, and added that it’s also a "popcorn film" full of "guns and bombs." Either way, it's Foster's glossiest and highest-profile directorial effort yet. It’s also a striking change of pace from the shaggy, everyday dramas Foster has helmed leading up to it, including 2011's well-reviewed but commercially disappointing The Beaver.

When asked by Taymor early on about the diversity of her directorial interests, Foster responded that all of her works can be responses to the question, "How real can we be?" But this doesn’t necessarily signify cinema vérité—it digs deeper into our emotional realities as well. As Foster gorgeously explained, "Why can't your emotions be blue and green and gold and why can't they take flight?"

There was, of course, the requisite topic of being a woman director (or, as Taymor put it, "the woman thing"), which both Foster and Taymor approached with understandable tact but also clear exasperation. Foster expressed in no uncertain terms that, when it comes to discussing the issue within today's prevalent dialogues, she’s "sick of it," but then admitted, "It's real." Expanding on the issue, Foster said, "People still see…women as a risk and I'm not sure why," before offering her belief that “women have a different leadership style [than men]."

When pressed on the "women in film" conversation later during the audience Q&A, Foster explained, "I think we're all looking forward to a day when we won’t have to have it." And when it comes woman filmmakers getting passed over for big franchise flicks, an absence which Jurassic World director Colin Trevorrow not so long ago embarrassed himself by attempting to mansplain, Foster expressed, “It would be nice to have a more complex conversation [around that].” She called her The Silence of the Lambs collaborator Jonathan Demme her "favorite woman director," explaining that the lack of gratuitousness within that landmark thriller is a testament to Demme's ability to stand on Clarice's side, turning an overwhelmingly lurid tale into one of female heroism at its most human and mettlesome.

Foster and Taymor also covered the former’s favorite books (J.D. Salinger's Franny and Zooey directly inspired Little Man Tate with their dual emphases on "families that we create that don't fit into other places"), the films that changed her life (most of them French, but also those by Fellini, Fassbinder, and Lina Wertmüller, the first female director whose work she saw on the screen), and even the future of video games, a field in which Foster believes "some of the most interesting art" is being created. She also called BioShock, her son’s favorite game, "extraordinary," to the audience’s audible surprise.

Foster is one of our most attuned and adventurous storytellers, still seeking out new mediums to conquer and new roles to turn into passions. When asked by an audience member how she prepares for her films, Foster replied, "Every story requires a new invention," just as every career, no matter how masterly, requires reinvention. Jodie Foster gets that. She always has.