Real-life hackers and pop culture's favorite fictional hackers joined forces inside the Festival Hub for a conversation and interactive demonstrations. 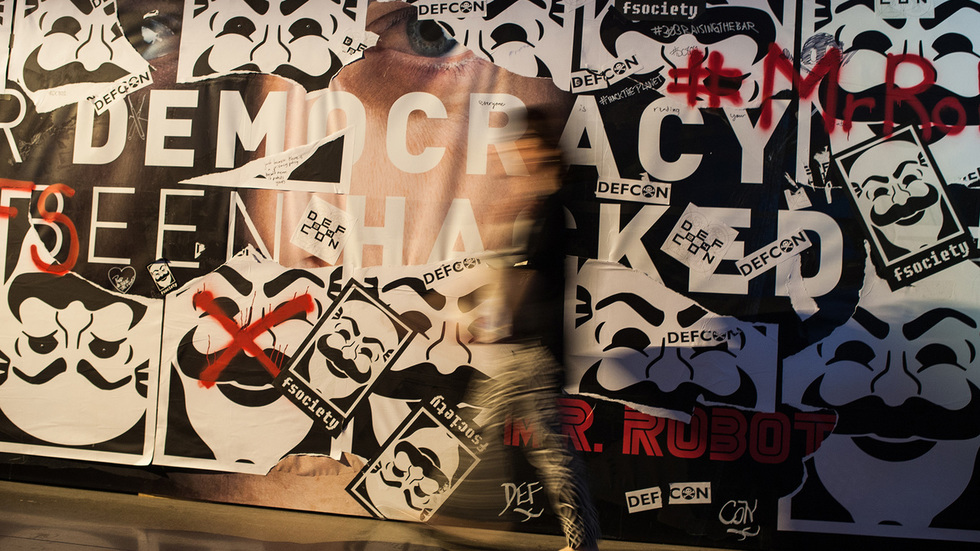 The addictive USA Network series Mr. Robot ambitiously brought the world of hacking to mainstream television last year, receiving widespread acclaim and drawing a devoted fan base. The TV thriller serves as the sponsor for this year's HACKED BY DEF CON and Mr. Robot, a hackers' conference hosted by the Tribeca Film Festival. On Sunday, April 17, the third and final day of the event, held at the Festival Hub, visitors were treated to "villages" offering lessons in lock picking, hardware hacking, bio-hacking and Internet privacy. (Read more details here.)

Early in the day, a panel discussion featuring the Mr. Robot cast and moderated by Jeff Ross, a.k.a. Dark Tangent and the founder of DEF CON, addressed the issue of "Living in a Post-Mr. Robot World." The panel included the show’s breakout star, Rami Malek, supporting cast members Christian Slater and Carly Chaikin, and series writer and consultant Kor Adana.

When asked about the relatability of his character, Elliot, Malek broke the ice, saying, "Looking at this audience, I see a lot of people who look socially isolated," which drew a big laugh. Getting serious, he added that he admired Elliot as a "flawed, modern hero" facing “grief and tragedy and doesn’t know how to communicate.” The character tries to change the world in a "heroic way that is real." He's "difficult and challenging," which is what made Malek want to take the role.

Despite loving the series, Mr. Robot’s cast members weren't sure if a wider audience would feel the same. "This show is dope," was Malek’s first reaction to the script. Chaikin said she had hoped "people loved it as much as we do." Adana added, "I thought we had something special, but we were surprised by other people embracing the series." Chaikin insisted on its “honesty and authenticity,” and Adana continually returned to the ways in which the writers made a huge effort to make the hacking "realistic." All the code was carefully written, particularly with the knowledge in mind that the hackers in the viewership would screenshot the code on display and pick it apart. The hackers in attendance appeared to collectively nod in appreciation.

Ross brought up the continuity between Slater's character in Mr. Robot and the one he played decades ago in the cult classic Heathers. "They're fun characters to play," said Slater. "Being an anarchist is very exciting." Both characters plot to blow up an institution; it’s as if J.D., Slater’s Heathers character, has graduated from attacking high schools to big corporations. "We need anarchists to stand up and fight," added Slater. "The stakes are getting higher, and there will always be a need for that [rebellious] voice."

Chaikin, on the other hand, was asked about the leap she took from playing a peppy blonde teenager in the series Suburgatory to a chain-smoking gothic hacker in Mr. Robot. "As an actor, I want to be able to play any character," she said, adding that her current role is “more artistically fulfilling.” She also told of how the producers originally dismissed her and only accepted her in the role after her audition, which they had reluctantly allowed. Chaikin knew the truth about her character's identity from the start, which was the only way for her to play Darlene properly. It was hard for her to keep the secret, particularly given the negativity she faced on the Internet from fans. "I would call Rami, saying, 'Everyone hates me!'"

While Mr. Robot has "raised the awareness of hacking" in the public and cast alike, per Slater, it has also made them all more paranoid. Malek has picked up the habit of taking note of people’s information at airports, and Slater admitted to using TeenSafe to track his daughter’s Internet activity. "Everything we do is possible," warned Chaikin.

Cinema was discussed as an important inspiration for the hacking community; Hackers had inspired Adana to learn about computers, and Blade Runner is Ross' favorite movie. “Give it up for Hackers,” said Ross. “Every character was based on a real hacker, except Angelina Jolie because there aren’t any hot hackers.” Malek cited Taxi Driver as a film that used voice over—normally a screenwriting faux pas, he noted—in a similarly powerful way as it’s used in Mr. Robot. “It’s a brilliant way to get into Elliot's psyche,” agreed Slater.

They were inevitably asked about Easter eggs, a term Slater said he only recently learned. (Slater's fragile familiarity with contemporary terminology was a running theme throughout the talk, as he also hesitated after using "troll.") Apparently, the scarf worn by Slater is hanging on Elliot's door the entire first season. Adana noted that he frequently hides fun details. "Everything is there for a reason," said Malek, who noted that shots tend to keep the background in focus to amplify the possibilities within the fictional world.

The cast loved one question in particular: What would be the theme song for their characters? For Chaikin, it was Bob Dylan's "Hurricane"; for Slater, the Steve Miller Band's "The Joker"; and for Malek, Neil Diamond's "If You Stay."

Mr. Robot returns to USA this summer for a second season.