19 Kickstarter-Funded Films Will Premiere at Tribeca 2016

The benefits of crowdfunding will be heavily on display all throughout the 2016 Tribeca Film Festival. 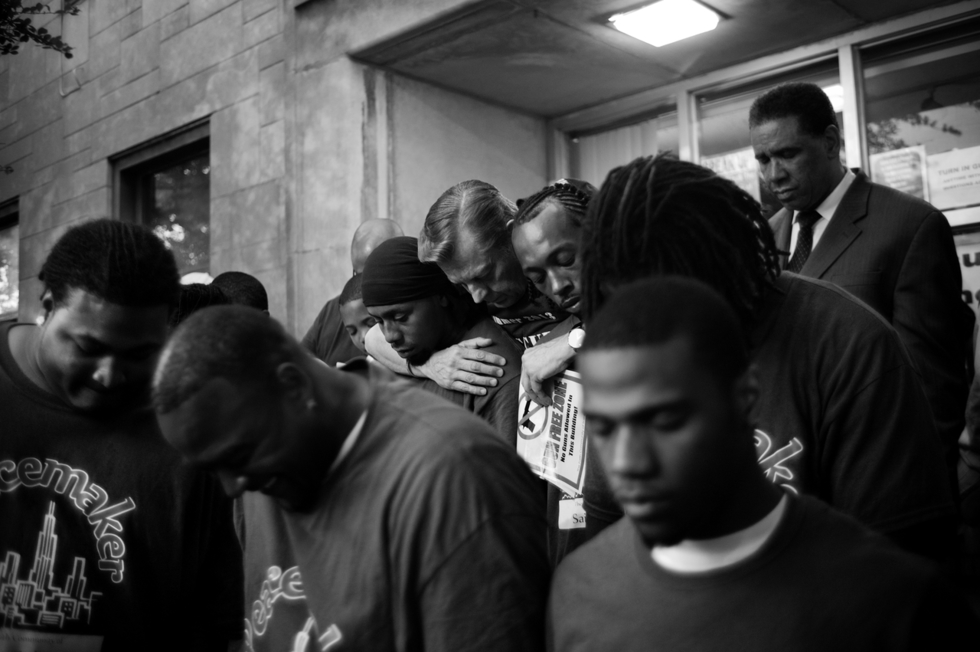 WE ALL WE GOT, one of the 19 Kickstarter-funded films premiering at Tribeca 2016.

The Tribeca Film Festival and Kickstarter have been partners-in-crowdfunding since the money-generating site's inception since 2011. Over the last six years, the Festival has screened a plethora of Kickstarter-funded films, most notably a collection of critically acclaimed documentaries, including The Birth of Sake, Racing Extinction (formerly titled The Heist), Thank You for Playing, and (T)ERROR.

This year, the Tribeca/Kickstarter connection is on another level entirely. There are 19 Kickstarter-backed films at this year's Festival, with more than 31,000 supporters who pledged more than $2.08 million. There’s a documentary about Ghostbusters fan mania, a short doc rooted in the Black Lives Matter movement, a psychological thriller from an exciting on-the-rise woman director, a nostalgic trip down Star Trek's memory lane, and an all-access look at inmates' post-jail lives. One of the projects, a documentary about celebrity scientist Bill Nye, even set a head-turning Kickstarter record of over $800,000 that's since been broken.

To help simplify the ins and outs of going from crowd funds to a film festival premiere, the panel "Kickstarter as Audience Engagement" will gather three of Tribeca 2016’s Kickstarter beneficiaries—Sophia Takal (Always Shine), Kahane Cooperman (Joe's Violin), and Kel O'Neill (The Ark)—for a live conversation on Friday, April 15, at 3:00 p.m., at the Festival Hub.

Here’s a breakdown of all of Tribeca 2016’s Kickstarter-blessed films.

Always Shine
Directed by Sophia Takal, written by Lawrence Michael Levine. (USA) – World Premiere.
This twisty psychological drama about obsession, fame, and femininity follows two friends, both actresses (Mackenzie Davis and Caitlin FitzGerald), on a trip to Big Sur, to reconnect with one another. Once alone, the women's suppressed jealousies and deep-seated resentments begin to rise, causing them to lose their grasp on not only the true nature of their relationship, but also their identities. With Lawrence Michael Levine, Alex Koch, Jane Adams.
BUY TICKETS HERE.

The Happy Film
Directed by Stefan Sagmeister, Ben Nabors, and Hillman Curtis. (USA) – World Premiere.
Designer Stefan Sagmeister takes us on a personal journey to find out what causes happiness. Experimenting with three different approaches—meditation, therapy, and drugs—Sagmeister embarks on an entertaining and introspective quest, accented with a whimsical panoply of graphics, charts, and proverbs. The Happy Film may not make you happier, but it will surely move you to reexamine your own pursuit of happiness.
BUY TICKETS HERE.

Memories of a Penitent Heart
Directed by Cecilia Aldarondo. (USA, Puerto Rico) – World Premiere.
Like many gay men in the 1980s, Miguel moved from Puerto Rico to New York City; he found a career in theater and a rewarding relationship. Yet, on his deathbed he grappled to reconcile his homosexuality with his Catholic upbringing. Now, decades after his death, his niece Cecilia locates Miguel's estranged lover to understand the truth, and in the process opens up long-dormant family secrets. In English, Spanish with subtitles.
BUY TICKETS HERE.

The Return
Directed by Kelly Duane de la Vega and Katie Galloway, written by Kelly Duane de la Vega, Katie Galloway, and Greg O'Toole. (USA) – World Premiere.
How does one reintegrate into society after making peace with a life sentence? California's controversial and notoriously harsh three-strikes law was repealed in 2012, consequently releasing large numbers of convicts back into society. The Return presents an unbiased observation of the many issues with re-entry through the varied experiences of recently freed lifers.
BUY TICKETS HERE.

For the Love of Spock screening and conversation with Zachary Quinto and director Adam Nimoy in celebration of the 50th Anniversary of Star Trek.
For The Love of Spock is a documentary film about the life of Star Trek's Mr. Spock as well as that of Leonard Nimoy, the actor who played Mr. Spock for almost 50 years, written and directed by his son, Adam Nimoy.
After the screening: Actor and subject Zachary Quinto, director Adam Nimoy, and more, moderated by Gordon Cox (Variety).
Monday, 4/18, 5:00 p.m., SVA2
BUY TICKETS HERE.

After Spring
Directed by Ellen Martinez and Steph Ching. (USA) – World Premiere, Documentary.
Close to 80,000 Syrian refugees live in the Zaatari Refugee Camp in Jordan. After Spring immerses us in the rhythms of the camp, the role of the aid workers, and the daily lives of two families as they contemplate an uncertain future. Executive produced by Jon Stewart, this is a fascinating journey through the camp's physical and human landscapes. In Arabic, English, Korean with subtitles.
BUY TICKETS HERE.

HAVEABABY
Directed by Amanda Micheli. (USA) – World Premiere, Documentary.
Amanda Micheli's haveababy opens with a YouTube-based competition for a free round of in vitro fertilization, courtesy of a Las Vegas fertility clinic. Through this controversial contest, Micheli explores the complexities of America's burgeoning fertility industry and paints an intimate portrait of the many resilient couples determined to have a baby against all odds.
BUY TICKETS HERE.

Southwest of Salem: The Story of the San Antonio Four
Directed by Deborah S. Esquenazi. (USA) – World Premiere, Documentary.
In 1994, four women were tried and convicted of a heinous assault on two young girls in a court case that was infused with homophobic prejudice and the Satanic Panic sweeping the nation at that time. Southwest of Salem is a fascinating true crime story that puts the trial of the San Antonio Four in context of their ongoing search for exoneration.
BUY TICKETS HERE.

Here Alone
Directed by Rod Blackhurst, written by David Ebeltoft. (USA) – World Premiere, Narrative.
A virus has ravaged human civilization, leaving two groups of survivors: those who have managed to avoid infection, and those driven to madness, violence, and an insatiable bloodlust. Living deep in the woods, Ann, Chris, and Olivia are forced to fend off the infected while foraging for supplies. But when a supply expedition goes terribly awry, one among their number must make a terrible choice. With Lucy Walters, Gina Piersanti, Adam David Thompson, and Shane West.
BUY TICKETS HERE.

Untitled Bill Nye Documentary
Directed by David Alvarado and Jason Sussberg. (USA) – Work-In-Progress, Documentary.
When it raised over $800,000 on Kickstarter, The Untitled Bill Nye Documentary broke the fundraising site's records and instantly became one of the most anticipated upcoming documentaries. Join the filmmakers and the titular Science Guy as they preview exclusive scenes from their upcoming doc and discuss their process, collaboration, and fundraising strategy.
BUY TICKETS HERE.

Balcony
Directed and written by Toby Fell-Holden. (U.K.) – North American Premiere.
In a neighborhood rife with racial tension, a local girl falls for a recent arrival who is the victim of prejudice and shame. In Dari, English with subtitles.
BUY TICKETS HERE.

Future Boyfriend
Directed by Ben Rock, written by A. Vincent Ularich. (USA) – World Premiere.
Stuart and Kaylie are enjoying their third date until Stuart reveals a secret that threatens to derail their relationship. Is he telling the truth, or is it just science fiction?
BUY TICKETS HERE.

Shooting an Elephant
Directed by Juan Pablo Rothie, written by Alec Sokolow. (Venezuela, USA, U.K., Nepal) – New York Premiere.
Adapted from George Orwell's autobiography—a young British imperial policeman in Burma is given the no-win mission of handling a rogue work elephant, only to find that the role he is destined to play is that of public executioner.
BUY TICKETS HERE.

The Carousel
Directed and written by Jonathan Napolitano. (USA) – World Premiere.
In the small town of Binghamton, New York there spins a 1925 carousel that once inspired Rod Serling and has since become a portal into the Twilight Zone.
BUY TICKETS HERE.

Joe's Violin
Directed by Kahane Cooperman. (USA) – World Premiere.
A 91-year-old Holocaust survivor donates his violin to an instrument drive, changing the life of a 12-year-old schoolgirl from the Bronx and, unexpectedly, his own.
BUY TICKETS HERE.

We All We Got
Directed and written by Carlos Javier Ortiz. (USA) – New York Premiere.
In the wake of the Black Lives Matter movement and the country's recent focus on youth violence, police brutality, and marginalized communities, We All We Got is an elegy of urban America, and an intimate portrait of the people affected by violence in Chicago.
BUY TICKETS HERE.

The Ark
Project Creators: Jongsma + O'Neill (Eline Jongsma and Kel O'Neill)
Key Collaborator: Springbok Entertainment
The northern white rhinoceros is the most endangered animal on the planet. Only three remain, and they are protected at all times by armed bodyguards. The Ark is a virtual reality documentary that puts viewers face-to-face with the last northern white rhinos, and tells the story of the global coalition scientists who are fighting to rescue the species from extinction.
BUY TICKETS HERE.