The legendary funnymen turned the Beacon Theater into a laugh factory with a little help from HBO's John Oliver. 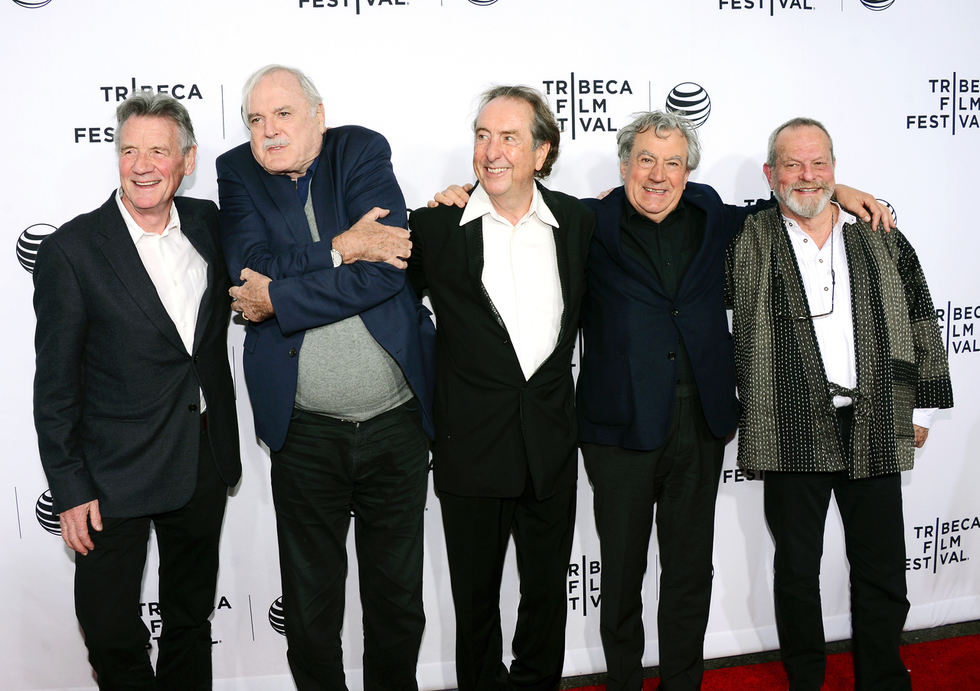 To call what happened last night inside the Beacon Theater a “Q&A” would be a serious marginalization—it was more like a “Pythonesque free-for-all,” and it was magical.

And they weren’t alone. Following a special screening of their classic piece of brilliant absurdist cinema, Monty Python and the Holy Grail, which opened 40 years ago this month in London, the Pythons sat down for a lively chat with HBO’s Last Week with John Oliver host, British funnyman/political satirist John Oliver. You couldn’t have asked for a better moderator—with his cunning blend of an acerbic wit and a silly attitude, Oliver’s the closest thing comedy has to a modern-day Monty Python member.

Which is code for: John Oliver’s the only man in NYC who’d be able to keep with up the Pythons in a live setting. Though they’re in their 70s, the English crew—minus the late Graham Chapman, who passed away from cancer in October 1989—are as sharp and playfully anarchic as they were back when Monty Python’s Flying Circus premiered on the BBC in October 1969. Rarely did they actually answer any of Oliver’s questions, including his jokey but also genuinely real opening inquiry, “Why do you think [Monty Python and the Holy Grail] has lasted so long, besides being fucking great?” What followed was a series of hilarious non-sequiturs occasionally in which the Pythons occasionally responded to Oliver’s questions and sporadically provided information about the making of Holy Grail. For that, though, there’s the film’s Wikipedia page. When you pay to see Monty Python live, you want to see their singular brand of silliness.

Oliver said it best himself: “There’s nothing less funny than sincerity.”

The filled-up Beacon Theater’s crowd, made up of fanatical Python lovers who probably did “Silly Walks” on their way to casual ones who most likely can’t sing “The Lumberjack Song” word-for-word, were preconditioned for the madness. The Holy Grail screening played like a Rocky Horror Picture Show experience, with the audience loudly clapping as characters like “Tim the Enchanter” and the “Black Knight” showed up on screen and applauding even more fervently as each scene concluded. A surrealistic and endlessly irreverent send-up of the King Arthur and the Knights of the Round Table Legend, the film, co-directed by Gilliam and Jones, hasn’t lost any of brilliance after four decades. It’s still a true original, from Gilliam’s hand-drawn animation sequences to that “harmless lit-tle bunny.”

One of the film’s first big laughs comes from the sight of King Arthur (played by Chapman) galloping up a hill not on horseback but on foot, with his man-servant following behind him and constantly smacking two half-coconuts together to simulate horse sounds. During the post-screening chat, Idle, recalled one of their stateside marketing tactics for the movie’s theatrical run. “Here in New York,” he told Oliver, “we had a guy, an actor, walking around with a banner that said ‘Come see Monty Python and the Holy Grail and you’ll get free coconuts!” Knowing exactly whose film festival he was at, Palin quickly added, “That actor was Robert De Niro.”

It wasn’t De Niro, of course, but the crowd ate Palin’s line up. Ever the showman, Palin was doing what guys like the Pythons do best, and which of all them did last night: never waste a joke in front of your viewers. “The audience is king,” said Cleese, later in evening. “If you make them laugh, you’ve won, and if you haven’t made them laugh, you’ve lost.”

One of Cleese’s best victory tactics: randomly going mobile. He got up from his chair and left the stage twice, much to the crowd’s delight. Those seat-fillers really appreciated Cleese’s exits the time he returned to the stage with an extra seat, igniting a madcap round of Musical Chairs, which led to Gilliam and Oliver turning their backs to the crowd and conducting a pseudo-serious interview, Idle being left by himself on the stage’s left-side as the other five gathered in a circle of chairs (Idle: “Good evening, welcome to my show—here is the invisible comedian.”), and, Cleese crouching behind Gilliam’s seat and making fart noises. (God bless Cleese’s immature 75-year-old heart.)

Playing along with the Python’s spontaneity, Oliver owned the night just as much as five idols. Before the Holy Grail played, the stage’s big screen told the audience to tweet their questions for the guys to @AskMontyPython, a risky maneuver that, oddly enough, didn’t yield any recklessly, and, thus, funnily, inappropriate tweets. Oliver read a few of them to Monty Python, and one particular Python saved what could’ve have been crash-and-burn status:

Oliver: Which one of you is Michael Palin? Yes, that’s the real question.
Idle: The answer is…me.

Another question was tweeted by someone with a Twitter handle that includes “RedSoxFan,” which, naturally, didn’t sit well with the Big Apple crowd. In response, Cleese stood up and told one guy in the front row to calm down, and Oliver’s commentary was genius-level: “You can still quash an American rebellion! If you were alive in 1776, this [country] could have been ours, John.”

The rest of Twitter’s output was, to put it lightly, shockingly lame. “These questions are shit,” Oliver told the Pythons, before scrapping the tweets altogether and heading out into the audience, Maury-Povich-style. The first person to receive Oliver’s microphone asked, “Do each of you have a favorite sketch?” Before any could respond, Oliver said, with his trademark cheer, “That was a shit question!”

A couple more duds from the audience, and Oliver really let ’em have it. “You’re letting your country down,” he told the crowd as a whole.” America is better than this—I can’t believe you’ve made me say that.”

Minutes later, Monty Python’s NYC reunion ended just as agreeably manic as it’d been from the start of Monty Python and the Holy Grail’s zany opening credits sequence. Once he’d had enough of those “shit” questions, Oliver hustled back onto the stage to offer one last abrupt thought: “I know we’ve established that nothing’s funny about sincerity, but you’re the fucking greatest!” Truer mic-drops have rarely been seen.