Our downtown community is the heart of our Festival. Here are some great free events that movie fans and families can enjoy! 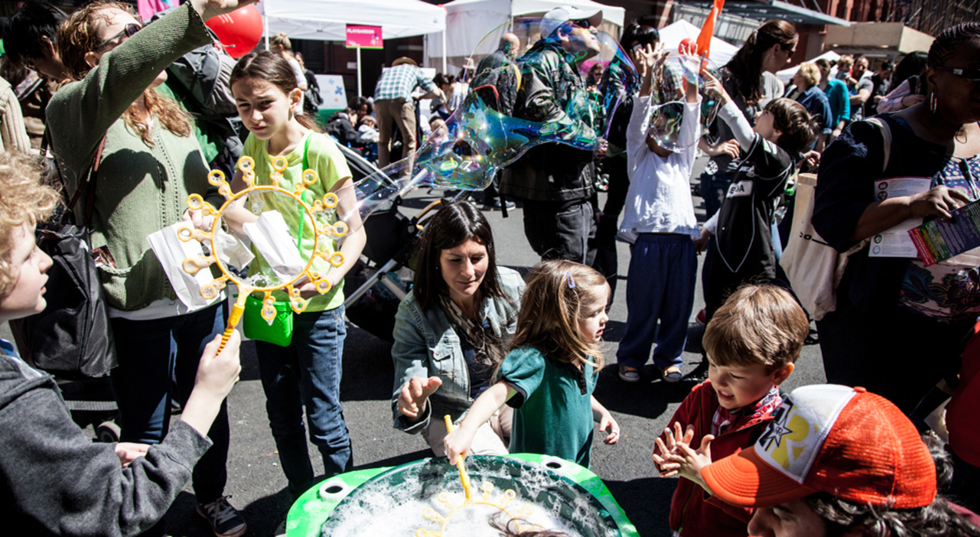 We at the 2015 Tribeca Film Festival, sponsored by AT&T, are thrilled to be able to offer New Yorkers and their families free community events year after year. Certain signature events are well known: the Tribeca Drive-In (April 16-18), Family Festival Street Fair (April 25), Tribeca/ESPN Sports Day (April 25), and Tribeca Family Screenings (April 19 and 25). We invite all ages to come down and enjoy family-friendly activities, screenings, performances and refreshments from local restaurants and vendors—all available directly in the heart of Tribeca!

Out of a plethora of options families and film fans can take part in, we’re highlighting 4 particular events that we feel should not be missed! For a full list of events and activities, visit our Tribeca Family Festival page.

Even though Back to the Future is quickly approaching its 30 anniversary (if you can believe it), the film is as fresh, funny and poignant as when it first came out in 1985. Starring Michael J. Fox and Christopher Lloyd, the phenomenally popular first installment of the beloved trilogy appeals to all moviegoers, young and old. In addition to the free screening, audience members will be treated to a sneak peek at the upcoming documentary, Back In Time, and even a special guest or two! While admission is free on a first-come, first-served basis, we suggest that moviegoers arrive 30 minutes prior to the start of the program at the BMCC.

Co-sponsored by AT&T and hosted by Brookfield Place, the Tribeca Drive-In® is back with another exciting series of 3 free evenings of cinema under the stars. While each screening will start at dusk (approximately 8:15pm), audiences are invited to take part in the festivities once the doors open at 6PM.

The hilariously twisted murder mystery Clue will kick off the program with a bang on Thursday, April 16, and fans are encouraged to dress in costumes inspired by the film for a chance to win prizes and take part in our Murder Mansion photo booth. On Friday, April 17, the Tribeca Drive-In® will present the animated classic, Lady and the Tramp, and families (and even lovebirds) in attendance can enjoy accordion players, face-painting and a surprise visit from one of the internet’s most beloved dogs before the screening. David Gelb’s documentary on Ford motors, A Faster Horse, will end the series on Saturday, April 18. On that day, audiences are invited to come early to help celebrate the 50th anniversary of the Ford Mustang with food, beverages, interactive car-themed simulations, movie trivia and other contests.

Do you have a budding filmmaker in the family? In addition to live Broadway performances, arts and crafts, games, and general entertainment, we’re giving children of all ages the opportunity to experience what it’s like to make a movie on the streets of New York City—complete with lights, cameras and action! The Theatrical Teamsters Local 817, with the help of James Leavey and Thomas O’ Donnell, will be at the Tribeca Family Festival Street Fair with movie trailers, professional camera equipment and tips from the teamsters themselves! Kids will also have the chance to craft their own screenplays with Writopia and learn about Hollywood-grade camera drones from the fine folks at AeroCine. The Mayor’s Office of Media & Entertainment will also be on site with their “Made in NY” event, which celebrates the record-breaking number of episodic television programs and films shot in NYC this year.

Tribeca and ESPN will once again bring “sports to the street” at the 9th annual Sports Day, sponsored by Mohegan Sun. At this beloved event, families can participate in and enjoy activities presented by the Brooklyn Nets, New York Knicks, New York Rangers, New York Liberty, and many other of the city’s professional sports teams and leagues. Kids and adult can experience sports they’ve never tried before like double dutch jump roping with instructors from Double Dutch Empire, fencing with Olympians and elite athletes from the Fencers Club, and ping pong hosted by a bona fide ambassador from SPiN.

For a complete breakdown of the free events, screenings, and activities that will be part of our 2015 Tribeca Family Festival Street Fair and Tribeca/ESPN Sports Day, click here.