One of the last masterpieces of the New Hollywood era, a beloved 1980s cinematic touchstone, and the most popular band in music history will all be revisited at the 2019 Tribeca Film Festival. 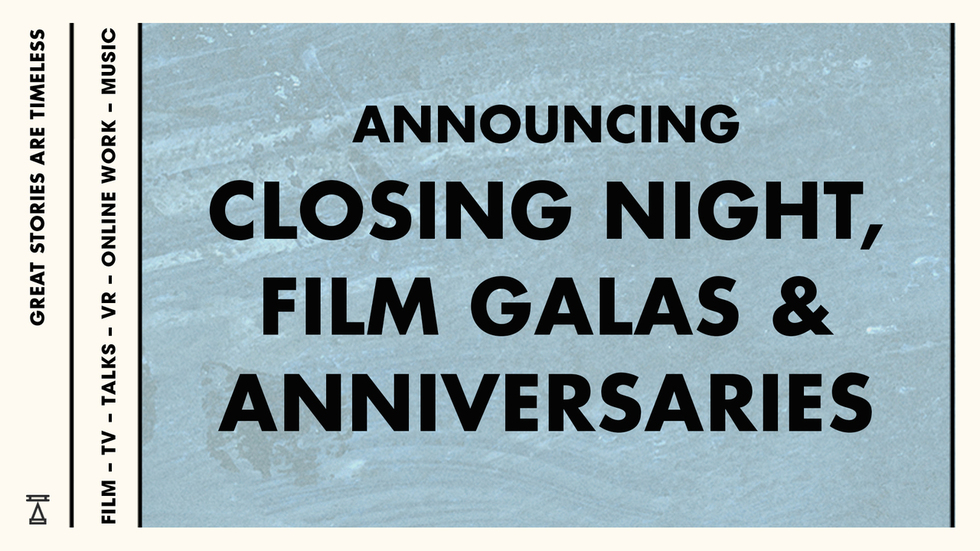 The Tribeca Film Festival, presented by AT&T, announced today that Oscar-winning director Danny Boyle's Yesterday, from Universal Pictures and Working Title, will make its world premiere as the closing night selection of the Festival's 18th edition. Tribeca also announced this year’s Gala anniversaries, including a never-before-seen restored version of Francis Ford Coppola’s cinematic masterpiece, Apocalypse Now, and the 30th anniversary and cast reunion of Cameron Crowe's iconic 1980s coming-of-age film Say Anything.... Additional Gala screenings include the world premiere of Between Me and My Mind, a documentary about Phish lead singer Trey Anastasio, followed by a special musical performance by the Trey Anastasio Band at the Beacon Theatre, as well as the Tribeca/ESPN Sports Film Festival opener The Good, The Bad, The Hungry.

The previously announced 25th anniversary of Reality Bites will now bring together director Ben Stiller with screenwriter Helen Childress and his widely acclaimed cast, including Winona Ryder, Ethan Hawke, Janeane Garofalo, Steve Zahn, as well as more surprise guests from the film. These film anniversaries and reunions are completed by the 35th anniversary of This Is Spinal Tap. In addition, Tribeca will give audiences a chance to see George Lucas' Star Wars: Episode IV - A New Hope (1977) on the big screen with a free family event on Star Wars Day—May the 4th be with you.

“This isn’t a time travel movie but it feels like introducing the Beatles music to America for the first time—again," said Boyle. "I am absolutely delighted that our film has been chosen to be the closing film of the Tribeca Film Festival. A great honor in a great city."

Tribeca will celebrate the 40th anniversary of Francis Ford Coppola’s renowned film Apocalypse Now as a Gala presentation at the Beacon Theatre. For the first time ever, audiences will see Apocalypse Now: Final Cut, remastered in 4K Ultra HD with Dolby Vision and Dolby Atmos from a 4K scan of the original negative.

“Restoring Apocalypse Now: Final Cut forty years later has been a tremendous undertaking and joy that I am thrilled to be able to share with the world for the first time at this year’s Tribeca Film Festival," said Coppola. "The audience will be able to see, hear, and feel this film how I always hoped it could be—from the first ‘bang’ to the final whimper."

Say Anything director Cameron Crowe, executive producer James L. Brooks, and the film's cast will be on hand to discuss their iconic coming-of-age-classic following a special screening marking its 30th anniversary.

"I can’t believe it’s been 30 years since we made Say Anything..." said Crowe. "The movie grew out of many inspiring conversations with James L. Brooks, and a quest to bring a new kind of romantic couple to the screen. Out of those many afternoons came the script, the opportunity to direct my own screenplay, and the great adventure of working with these wonderful actors, among them John Mahoney, Lili Taylor, Joan and John Cusack, and Ione Skye. And, of course, Eric Stoltz as The Rooster. We also had the gift of Peter Gabriel allowing us to use his extremely personal song, 'In Your Eyes.' No other song ever worked coming out of that boombox. Big thanks to Paula Weinstein and the Tribeca Film Festival for bringing us together for this anniversary screening, and a chance to watch the movie again on the big screen with old friends and a brand new audience.”

"This year, we are bringing some of the most iconic storytellers of our time back to the 'big screen’ for our audiences by creating events and reunions for beloved films,” said Tribeca EVP Paula Weinstein.

The film selections for Closing Night, galas, anniversary selections, and the Tribeca/ESPN Sports Film Festival gala are as follows:

Yesterday, everyone knew The Beatles. Today, only Jack remembers their songs. He’s about to become a very big deal. From Academy Award-winning director Danny Boyle (28 Days Later, Slumdog Millionaire, Trainspotting) and Richard Curtis, the Oscar-nominated screenwriter of Four Weddings and a Funeral, Love Actually, and Notting Hill, comes a rock-n-roll comedy about music, dreams, friendship, and the long and winding road that leads to the love of your life.

Jack Malik (Himesh Patel, BBC’s Eastenders) is a struggling singer-songwriter in a tiny English seaside town whose dreams of fame are rapidly fading, despite the fierce devotion and support of his childhood best friend, Ellie (Lily James, Mamma Mia! Here We Go Again). Then, after a freak bus accident during a mysterious global blackout, Jack wakes up to discover that The Beatles have never existed … and he finds himself with a very complicated problem, indeed.

Performing songs by the greatest band in history to a world that has never heard them, and with a little help from his steel-hearted American agent, Debra (Emmy winner Kate McKinnon), Jack’s fame explodes. But as his star rises, he risks losing Ellie—the one person who always believed in him. With the door between his old life and his new closing, Jack will need to get back to where he once belonged and prove that all you need is love. A Universal Pictures release.

Between Me and My Mind, directed by Steven Cantor. Produced by Jamie Schutz. (USA) - World Premiere, Feature Documentary. Driven by a constant need to create, Phish frontman Trey Anastasio takes on new projects, including some of his most personal music to date as well as Phish’s ambitious New Year’s Eve show at Madison Square Garden.

After the Premiere Screening: A special performance by Trey Anastasio Band

Francis Ford Coppola's Apocalypse Now will celebrate its 40th Anniversary at the Festival with a screening of a new, never-before-seen restored version of the film, entitled Apocalypse Now: Final Cut. Remastered from the original negative in 4K Ultra HD, the film will be brought to life with Dolby Vision, delivering spectacular colors and highlights that are up to 40 times brighter and blacks that are 10 times darker, and Dolby Atmos, producing moving audio that flows all around you with breathtaking realism. The Beacon Theatre will also be outfitted for this exclusive occasion with Meyer Sound VLFC (Very Low Frequency Control), a ground-breaking loudspeaker system engineered to output audio frequencies below the limits of human hearing, giving the audience a truly visceral experience.

First released on August 15th, 1979 and nominated for eight Academy Awards, Francis Ford Coppola’s stunning vision of the heart of darkness in all of us remains a classic and compelling Vietnam War epic. Martin Sheen stars as Army Captain Willard, a troubled man sent on a dangerous and mesmerizing odyssey into Cambodia to assassinate a renegade American Colonel named Kurtz (Marlon Brando), who has succumbed to the horrors of war and barricaded himself in a remote outpost.

After the Screening: Francis Ford Coppola and acclaimed filmmaker Steven Soderbergh will have a conversation to discuss the huge undertaking of restoring Apocalypse Now: Final Cut and why the time was right for Coppola to do this now, 40 years after the original version and 18 years after Apocalypse Now Redux.

Thirty years ago, Cameron Crowe shifted the landscape of romantic comedies with his remarkable and deeply felt debut that chronicled, with tender and warm-hearted authenticity, a vivid tale of first love. Charting the blooming romance between recent high-school graduates Lloyd (John Cusack) and Diane (Ione Sky), Crowe gave audiences one of cinema’s most indelible and enduring romantic movie moments: a lovesick boy, standing outside a girl’s window, asking her to love him with the help of Peter Gabriel and a boombox. Three decades later, Say Anything... continues to give off the affectionate, enveloping glow of first love. [Released April 14th, 1989]

Winona Ryder and Ethan Hawke star in Ben Stiller’s 1994 feature directorial debut, the iconic comedy-drama that defined a generation of independent moviegoing-and-moviegoers with its achingly-relatable portrait of early 90’s disaffected youth struggling to live and love amid the brutal reality of (almost) adulthood.

In the film, written by Helen Childress, Lelaina Pierce (Ryder) navigates her post-college disillusionment by turning the camera on her friends: the free-spirited Vickie (Janeane Garofalo); Sammy (Steve Zahn), struggling to come out to his conservative parents; and the passionate but direction-less Troy (Hawke), with whom Lelaina is romantically-entwined until video executive Michael (Stiller, also co-starring) arrives with the promise of both budding romance and the chance for Lelaina to cash in on her dreams—but at what expense?

Reality Bites may have been for and about Generation X, but has proven itself a timeless, decades-spanning classic. [Released February 18th, 1994]

This Is Spinal Tap—35th Anniversary

Spinal Tap is the loudest band in England and they’re making a comeback with a North American tour promoting their new album, Smell the Glove. Marty DiBergi (Rob Reiner) sets out to make a documentary of the legendary rock band’s exploits on the road, featuring front men Nigel Tufnel (Christopher Guest) and David St. Hubbins (Michael McKean) and bassist Derek Smalls (Harry Shearer), bearing witness to the highs and lows of what makes a musician into a rock star. [Released March 2nd, 1984]

After the Screening: This Is Spinal Tap stars and creators Christopher Guest, Michael McKean, Harry Shearer, and Rob Reiner, will pay tribute to the band with a special musical performance and a conversation to follow

Nineteen years after the formation of the Empire, Luke Skywalker is thrust into the struggle of the Rebel Alliance when he meets Obi-Wan Kenobi, who has lived for years in seclusion on the desert planet of Tatooine. Obi-Wan begins Luke's Jedi training as Luke joins him on a daring mission to rescue the beautiful Rebel leader Princess Leia from the clutches of the evil Empire. Although Obi-Wan sacrifices himself in a lightsaber duel with Darth Vader, his former apprentice, Luke proves that the Force is with him by destroying the Empire's dreaded Death Star.

This is a first-come-first-serve free family event. Costumes are welcomed. May the 4th be with you.

Passes, Tickets, and Credentials for the 2019 Tribeca Film Festival

Also available for purchase now is The Hudson Pass, an all access pass to screenings and talks taking place at BMCC, Regal Battery Park Stadium, Village East Cinema, and SVA theaters as well as full access to all events at the Festival Hub at Spring Studios, which includes VR and Immersive projects, Movies Plus screenings, and access to festival lounges.

Tickets for events at The Beacon Theatre are available for purchase online starting March 19th.

Packages and passes are now available for purchase on the 2019 Tribeca Film Festival App, on iTunes and Google Play.