We've got the definitive shots of TFF 2013's glamour-puss on red carpets and with her mobs of fans. 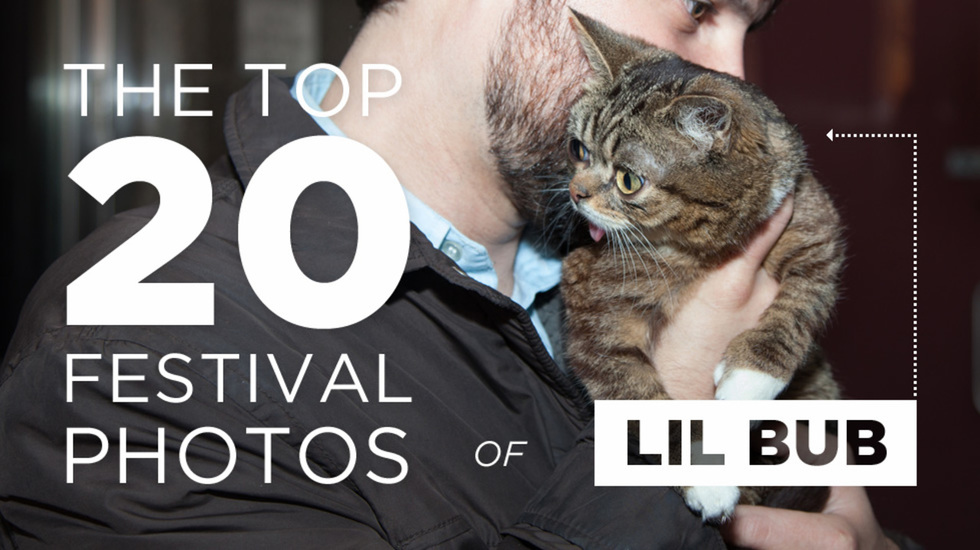 It's hard to imagine someone who hasn't heard of Lil Bub. The perma-kitten with the stuck-out tongue has been everywhere this festival promoting Lil Bub & Friendz, the film that lets you take a walk in Lil Bub's paws and introduces you to some of her other famous furry friends like Grumpy Cat and Pudge. We caught up with directors Juliette Eisner and Andy Capper to discuss the "zen" experience of Lil Bub, and now we've gotten to experience it ourselves. Bub has been on the red carpet for both the film's premiere and our last day of Tribeca Drive-In. Without further ado, here's our top 20 photos of Lil Bub from what I've decided to start calling the TRIBE-CAT FILM FESTIVAL. Me-ow!

1. At Bub's first red carpet, she was a natural.

2. She gave the paparazzi straight-on and profile.

3. Lil Bub gets man-handled on the red carpet.

4. One night on the red carpet and Bub is already OVER IT.

5. But Bub's grounded. One year after taking over the world, she's still close with owner Mike Bridavsky.

8. Bub shows us that even the most professional actresses need to be coddled.

10. On day 2 of the festival, she's still looking fresh-faced.

11. Things are looking up for Bub.

12. But she can still play demure.

13. Bub shares a tender moment with Mike before her second screening.

14. But then it's right back to being a true professional.

15. Bub meets some of her adoring fans after the Drive-In.

18. Mother and son bond over their love of Bub.

Can't get enough Lil Bub? You can still make it out to the film's last two screenings on Tuesday the 23 at 6:00 pm and Thursday the 25 at 3:00 pm. But Lil Bub is still connected to her internet roots, you can stream the hour-long documentary over on the Tribeca Online Festival. After the film, make sure to vote for Lil Bub in the Tribeca Online Film Festival so it can compete to take home the grand prize.