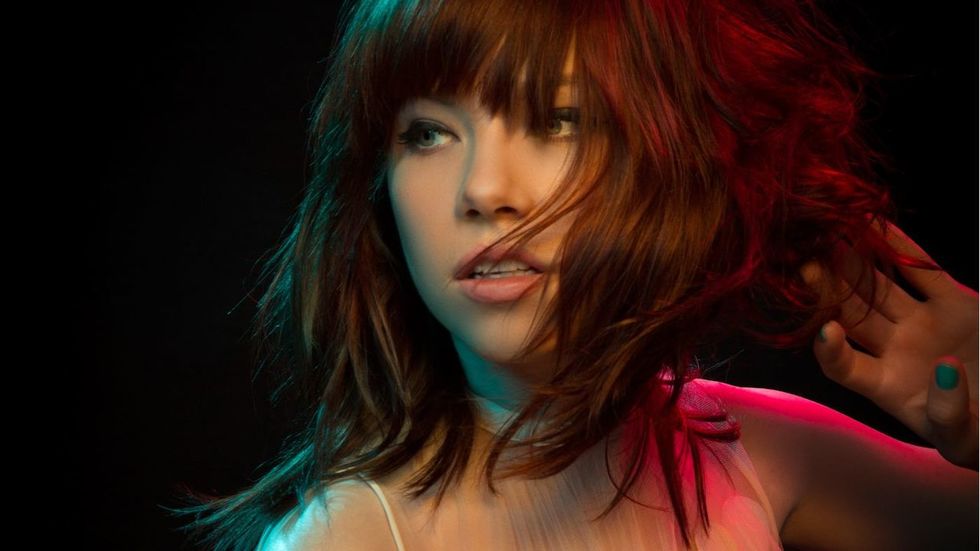 In this post-Beyoncé age, when nearly every mainstream artist is rushing to outdo one another by inflating the standard-issue, TRL-ready music video into something more stylistically heightened, narratively framed, and vaguely cinematic, let Carly Rae Jepsen's E·MO·TION be a reminder that the best pop singers have always been able to evoke visual wonder on the strength of their music alone.

This isn’t to say that the music video-as-short film trend isn’t a fruitful (or particularly new) one, or that Beyoncé necessarily needed the novelty of eighteen impeccable videos to sell the most masterful and multitudinous music of her career, not to mention the most important album of the decade so-far. I won’t pretend that Jepsen's E·MO·TION, the third studio release from the Canadian Idol crossover star turned “Call Me Maybe” songstress, holds even half the zeitgeist-defining significance of Beyoncé’s musical-visual juggernaut. It is, however, the best pop album of 2015 at the moment: a sweeping, spine-tingling, eighties-infused melodic odyssey full of concise, confectionary tracks that are as vigorously detailed as they are deeply-felt, slickly-engineered but never soulless. It’s as fun as Bangerz, but without the iffy cultural pilfering, and as sharply-conceived a crowd-pleaser as 1989, but without the beaming self-congratulation. (Seriously, send all the Taylor Swift fans in your life a copy of E·MO·TION and start the Carly Raevolution!) It’s also, in my mind, as much of a visual album as Beyoncé, but with one major caveat: you don’t have to watch a thing.

Which is strange because Jepsen’s two videos for E·MO·TION’s lead singles have been adorable but, frankly, unexceptional. The Valencia-filtered, on-the-road vibe of album opener “Run Away with Me” and the forced viral-readiness of the Tom Hanks-starring “I Really Like You” video are fun but distract from the real, transportive allure of these artisanal, self-written tunes. For an audience who grew up on the films of John Hughes (and the nineties babies who pretend to), E·MO·TION giddily encapsulates all the painful-pleasurable coming-of-age excitement that was so warmly captured in Hughes’ teen-centric cinema, which includes Sixteen Candles (1984), The Breakfast Club (1985), Ferris Bueller’s Day Off (1986), Pretty in Pink (1986), and Some Kind of Wonderful (1987). Hughes' canon only received its due respect years after each film’s initial release, a fate that I fear may befall the continually underappreciated Jepsen, who doesn’t seem destined for the sort of stadium-sized stardom of a Swift, but remains a pop songbird with an uncommonly acute knowledge of her genre’s debts, capabilities, and multi-sensory possibilities. From the techno-pop thrills of “Run Away with Me” and its gloriously cheesecake sax to the cavernous synths and dreamy melismas of album closer “When I Needed You” (i.e. “When I needed you-ooh-ooh-you!”), Jepsen and her fellow songsmiths are able to conjure up entire scenes, settings, objects, and characters from Hughes’ vaunted mid-eighties filmography. And, thankfully, Long Duk Dong is nowhere to be found.

Jepsen is as clear-eyed and open-hearted a heroine as peak Molly Ringwald, right at the moment in these films when the mean chip on her shoulder has been newly knocked off by the arrival of romantic gratification, friendly fulfillment, or familial reconciliation. The jubilant, ear-wormy breathlessness and cloudburst choruses of “I Really Like You” and “Making the Most of the Night” recall every romantic epiphany Ringwald ever experienced on screen. from that table-top, birthday cake kiss in Sixteen Candles to Pretty in Pink’s climactic parking-lot make-out session. And the flash-mob finale from the “Really Like You” video at least brings to mind Matthew Broderick leading a loose-limbed gaggle of parade-goers in Ferris Bueller’s spontaneous rendition of "Twist and Shout."

E·MO·TION spotlights the same pliable, honey-laced voice that vaulted “Call Me Maybe” to the pop stratosphere, but Jepsen surrenders herself even more completely this time around, slipping into but nonetheless holding her own amidst the twinkling, jewel-toned soundscapes of the title track “E·MO·TION” and the standout anthems “Gimmie Love" and "Your Type," each a harmoniously headstrong gem of precipitous, maybe/maybe-not flirtation. "Let's Get Lost" not only replicates but actually intensifies the previously unknowable, "Call Me Maybe"-induced desire to slap on some cut-offs and skate around your local roller rink. Meanwhile, the Sia-authored “Boy Problems” is a peppy triumph of earnest girl talk that surely must have been recorded in TRAX or some other vinyl-covered record shop. It’ll have beige leather jackets, fire-engine red convertibles, and unsightly, DIY prom dresses bouncing around your head. And speaking of prom, the swooning, hushed-out ballad “All That,” co-written and produced by Blood Orange’s Devonté Hynes and indie super-producer Ariel Rechtshaid, is the slow dance-ready treasure that Hughes' characters dream about. Play it anywhere and you’re instantly in a crowded, hot-lighted gymnasium, swaying underneath a tacky disco ball with someone’s hands on your shoulders. It even survives shticky-sweet lyrics like “I’ll be your lighthouse when you’re lost at sea” and “I will be your candle in the dark,” which somehow only make the song more movingly infectious.

Every night feels like prom night on E·MO·TION, but it’s more than just a throwback album. E·MO·TION is a nostalgia trip that exercises the uniquely cinematic quality of escapism to take listeners back to the sights and sounds but also the feelings of Hughes’ films, where every crush held promise, every friendship would last forever, and even the suburbs felt magical. In Breakfast Club cosmology, it’s the sort of album that Claire and Andy would openly jam out to, Brian would only listen to in the privacy of his bedroom, and Bender would begrudgingly nod his head with, but only if it was on the radio. Even Allison might take a break from making her dandruff art and pixy stix sandwiches to hum along.

Jepsen and her collaborators have crafted a teenage dream that’s still pleasingly accessible to listeners of any age, like Debbie Gibson covering The Psychedelic Furs, or Tiffany taking on Simple Minds. It transcends pastiche by playfully experimenting with this prior era’s flamboyant sonic textures and marble notebook lyricism in a way that only modern music can really accomplish, and without any winking condescension to its vintage forbearers either. Like Hughes’ films, E·MO·TION is a yearning, kicky clash between the real and the make-believe, a denim-clad, neon-bathed fairy tale that makes romantic conventions seem cool, captivating, even transgressive in this day and age. It unlocks sensory alternatives we so rarely experience in our music anymore, an album you can see, touch, and taste because you've experienced it all before. And, indeed, bubblegum has never tasted sweeter.