The 5 Most Exciting Things About FX’s ‘Fargo’ Trailer

The first trailer for FX’s original series 'Fargo,' based on the Coen Brothers classic film, has hit the web! Oh yah, you can bet we’re pumped. 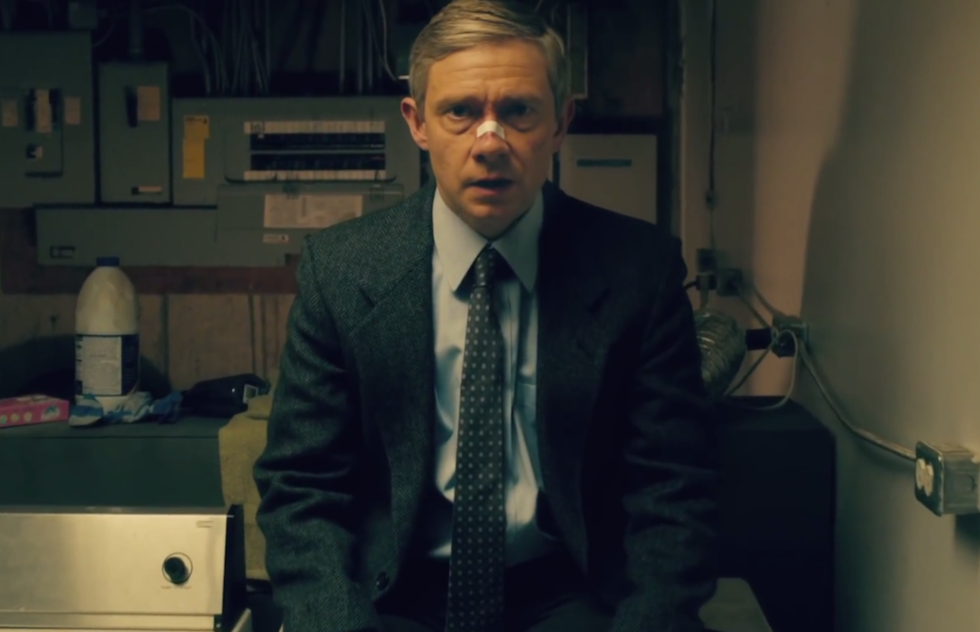 If you don't stand up to the boss, the wife, you're just going to get washed away.

FX made a lot of audiences go, “the heck do ya mean?” when it announced in 2012 that it was developing an original series, Fargo, based off of the Coen Brothers’ Academy Award Winning film with the same title that won over audiences and gave the Minnesota accent a permanent place in cinematic history. In the past year however, FX has quelled naysayers by signing a powerhouse cast that includes Billy Bob Thornton and Martin Freeman (also, having Joel and Ethan Coen signed on as Executive Producers doesn’t hurt).

The series, which will run as a 10-episode mini-series, seems to go with the ‘same but different’ model as it features a new case in the familiar Minnesota setting. Lorne Malvo (Thronton), a manipulative and mean-spirited drifter, arrives in town and attempts to influence the nice members of a small town in Minnesota, particularly the impressionable insurance salesman Lester Nygaard (Freeman).

Though there aren’t many additional plot details aside from the reappearance of a small town Minnesota police force, the trailer gives us five things that we can get on board with while we wait.

Return of the Lovable Idiot

Laughing at human stupidity is kind of a Coen Brothers staple. And considering Martin Freeman’s battered appearance throughout the trailer, it looks like the Sherlock star will continue the trope as Lester Nygaard. Lester has faint similarities to the befuddling Jerry Lundegaard in the original, played by William H. Macy. Whether or not Nygaard will embark on a crime route himself is up for question, though it can be assumed he'll find some way to get in over his head.

Odenkirk's Breaking Bad spinoff Better Call Saul may be a ways away, but audiences can still their fix of the charismatically sardonic actor. Playing Deputy Bill Oswalt, it’ll be fun to see Odenkirk departing from Saul's shady, snake-charming persona. We just hope he keeps the fur hat throughout.

Plenty of Minnesota Nice to Go Around

If you’ve seen the 1996 Fargo, chances are you couldn’t help but smile when you heard the iconic Minnesota diction in this trailer. The good ol’ Minnesota nice was a stark and delightful contrast to the plot that featuring a bout of crime and corruption. With ten full episodes set in Minnesota, that means that there’s more time to incorporate the lovable mid-western attitude and yes, the accent. Martin Freeman and newcomer Allison Tolman seem to have it down to a tee and as we get a glimpse of the characters in the town, there should be plenty of ‘oh yahs’ and 'oh jeez' to go around.

Following the human stupidity theme, petty criminals and botched attempts at organized crime are another favorite source of humor for the directing duo. Adam Goldberg and his gang serve as another nod to the auteurs as they try (and seemingly fail) to rob a conveience store,  adding another layer to the small town dynamic. It’s unclear yet what their involvement is or if there’s any crossover with Thornton’s character. But considering one gets shot in the face through a Funyuns bag, we’d guess not.

Mini-series are proving themselves as a successful format for both critics and audiences as evident by Top of the Lake and FX’s own American Horror Story. While Fargo may not be groundbreaking in choosing to follow this trend, the dark humor element is an exciting breath of fresh air in a category that has, so far, been very drama-heavy. With audiences still wrapping their head around the metaphysical thematics in True Detective, some laughs can certainly serve as a welcome relief. The real question though is, will the humor be able to sustain itself throughout? We’ll just have to watch and find out.

Fargo appears on FX on Tuesday April 15th. (Just a day before the Festival so you’ll have something to talk about while you wait for the screenings to begin!)