Home » Tribeca News » We Asked the TFF 2013 Filmmakers: “Who is Your Favorite New York Character, Real or Fictional?”
View All News

We Asked the TFF 2013 Filmmakers: “Who is Your Favorite New York Character, Real or Fictional?”

New York City is full of great characters, whether they are real or imaginary. Our TFF 2013 filmmakers share their favorites. 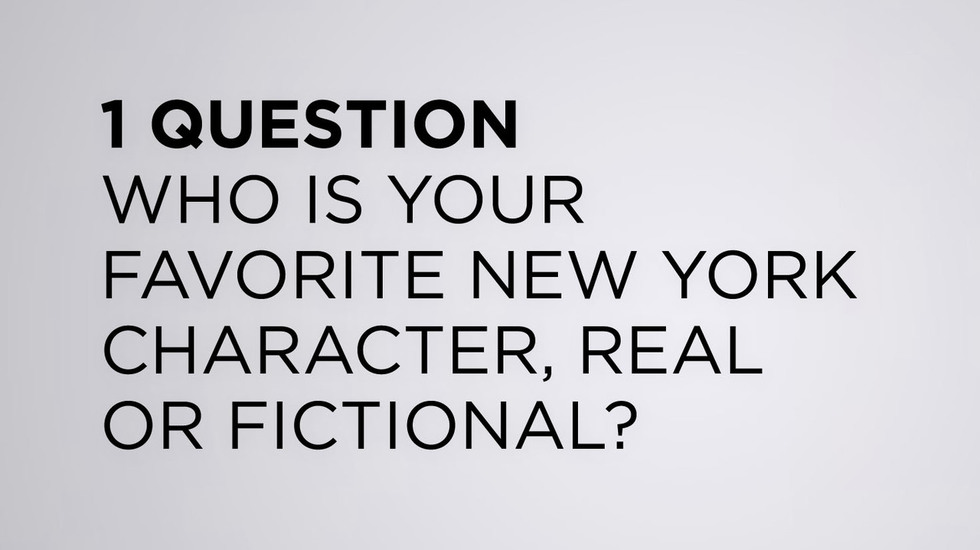 Iconic characters, both real and fictional, are inevitably associated with  New York City. Some of this year’s Festival filmmakers were gracious enough to share with us their favorite New Yorkers who embody the spirit of this great city.

"It’s Robert De Niro’s Rupert Pupkin. A funny, creepy, and brilliant performance. I think everyone dreams of success and can relate to his craziness to some degree.  Martin Scorsese captured obsession in a way I hadn’t seen before."

"A tie between King Kong and George Costanza."

"Woody Allen is my favorite New York character. That guy is the embodiment of this city. If you don’t know what I mean, just watch one of his films."

"Maybe Sal, from 'On The Road.' That book had a big influence on me growing up."

"It’s a tie between Howard Stern and Rocky Salemmo (the subject from my short doc The Bowler). In very different ways they both embody the spirit of what it means to be a New Yorker."

"Woody Allen. Manhattan is what painted my first visions of New York. I was a teenager I think when I saw it the first time, and I saw Mariel Hemingway surrounded by all these adults but holding her own, having wonderful, stimulating conversations, and being taken seriously. So I thought, 'that is New York and that’s for me!'”

"I was dying to say Holden Caulfield but I just can't. I’ll make people think I’m a serial killer. So there was a guy, I’m sure he’s deceased, named Broadway because that’s where he lived. I hate to be cliche but he was a fantastic African-American homeless guy in a wheelchair with one leg. He had the most spectacular dirty jokes, more spectacular dirty jokes than anybody I ever heard in the early 80s when I moved here. I would actively hang around Astor Place trying to find him just to get a new one even if it cost me all the quarters I was going to need for my Stromboli pizza, the best slice on 1st Avenue and St. Marks."

—Rob Meyer, A Birder’s Guide to Everything

"My man Yuli at my corner bodega.  I call him the Mayor of Montrose – he engages EVERYONE that comes in. Like, he’ll be ringing me up and introduce me to the girl behind me in line because we both work in visuals. He’s really into film, and has even started a film club and shows movies on the rooftops of people in the neighborhood – he uses his bed sheet for a screen. He also started a book club. I told him I want to make a short film about him but he laughed. I’m going to keep trying."

"I couldn’t possibly say. But there is this giant character in my memory. I grew up coming to NY several times a year to see family, and we would always spend several hours at the original Canal Plastics, which was this epic treasure chest of tiny, irresistible things. There was an autistic man who worked at the counter and knew the price of every single item in the store.

My sister and I would come to the counter with dozens and dozens of little chips of plastic of all shapes and sizes, and he would flick the pieces across the counter as he added the prices out loud. '7 cents times 13, plus .56 cents, plus 1.29 with an 8% discount for bulk.' He would just keep this running tally. His fingers and his brain would move so quickly, and I was mesmerized by him. He represents the New York I wish still existed."

"Louis de Palma, Danny Devito’s character in 'Taxi.'  He is just a terrible, terrible human being, but somehow he still comes off as likable.  It’s a credit to both how well the character is written and how completely endearing Danny Devito is."

"You know my favorite New York character was a real person named Robert Clampitt. He was a Wall Street lawyer who gave it all up to start a kids magazine called Children’s Express, which later became a newspaper column and a TV show. He’s just the quintessential New Yorker to me."

"I guess that it’s Woody Allen or Sylvia Miles from Andy Warhol’s films."

"Andy Warhol. Bob Fosse and Joe Gideon, the character based on Fosse played by Roy Schieder in All That Jazz. And of course Ratso Rizzo.  And Judy Davis in Husbands and Wives."

"I think it’d have to be my first building superintendent in New York, Roddy. He was missing his two front teeth and always put 40 ounces in front of my door for me on weekends when he had a good week. He was always very upbeat, which I appreciated."

"He may not be my favorite but I am fascinated with Roger O. Thornhill, Cary Grant’s character in North by Northwest. He represents what I love about New Yorkers.  He’s sophisticated, resourceful and quick on his feet. How can you not be charmed by a man who carries monogrammed matches?"