It’s a landmark case in the world of psychology, and now it’s the summer’s most intense psychological drama. And it’ll open your eyes to some hard truths about our world today. 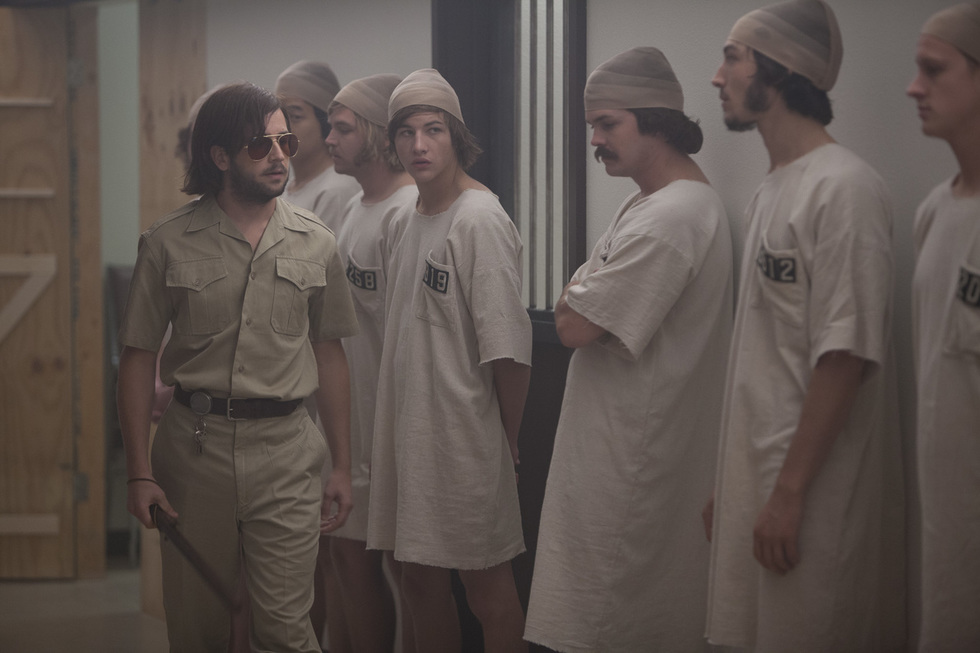 It was only supposed to be a harmless psychology study. Maybe a few undesirable effects, sure, but nothing like what ended up happening.

In August 1971, Stanford University psychology professor Dr. Philip Zimbardo organized an ambitious two-week-long experiment in which the psych department’s basement would be turned into a simulated prison, complete with a secluded and claustrophobic room called "The Hole." Eighteen male students were divided into two groups, "guards" and "prisoners," and were promised $15 a day to fully assimilate into their roles. Zimbardo intended to analyze how a person’s behavior changes when put under extreme authority or given that extreme authority, and, again, it wasn’t meant to hurt anyone, at least not in theory.

Merely six days into the project, Zimbardo stopped everything. It only took a few hours for the “guards” to start abusing their power and the "prisoners" to comply with every demeaning order. By the sixth day, the experiment had devolved into sexual perversion, intense humiliation and broken psyches. In other words, it became an actual prison, except with innocent teenagers, not hardened criminals. And in the years since, it’s earned a reputation as one of the most notorious psychology cases in history.

In The Stanford Prison Experiment, director Kyle Patrick Alvarez (C.O.G.) and a formidable cast of young actors—including Ezra Miller (Trainwreck), Michael Angarano (Cinemax’s The Knick) and Thomas Mann (Me and Earl and the Dying Girl)—dramatize those six harrowing days inside Stanford’s oppressive, injustice-filled basement. Patiently paced and terrifically acted, Alvarez’s film builds its nauseating tension with a stark naturalism, following the kids’ descent into madness with a bold straightforwardness. Each scene where the tyrannical "guards" terrorize the shell-shocked "prisoners" gets crazier by the second, until The Stanford Prison Experiment evolves into the big-screen’s worst collegiate nightmare since the rooftop sniper sequence in John Singleton’s Higher Learning.

"Part of the reaction we’d love for the audience to have is to say, 'Somebody fucking stop this! Why isn’t somebody in charge stopping this?'" Dr. Zimbardo tells TribecaFilm.com. "But the danger for some viewers is that this film is overwhelming—they paid to see something interesting unfold, but not necessarily to feel sickened with so much discomfort. Some people won’t like the film and will think it’s too overwhelming, but we hope people will take a step back and say, 'Oh my god, this film makes me want to do something about this,' rather than just be entertained."

As you're watching The Stanford Prison Experiment, it’s impossible to not wonder how you’d react in their situation while staring in horror at how out of hand Zimbardo's plan got, but it’s also tough not to think about the recent wave of power-abusing cops in our country’s news headlines. The videos and images of those officers manhandling and murdering Mike Brown, Freddie Gray and Eric Garner come to mind, and it’s deeply troubling.

In its own psychologically dense ways, the 1971 Stanford incident encapsulates the darkest sides of law enforcement and shows how environmental conditions can trigger one's inability to avoid subordination. Whether it’s police office or abusive lovers wrongfully exerting his or her power, it’s not always as easy as simply telling them to stop. Here, Kyle Patrick Alvarez and Dr. Philip Zimbardo elaborate on that point, discuss the blurred lines between "good" and "bad" and rationalize why certain cops behave how they do.

Who's Worse: the Doer or the Watcher?
"When we were at Sundance this year, there was a woman waiting on the line for our film who had a seizure right there on the line, and people weren’t helping her—they were taping it with their cell phones. That’s what everybody does these days: rather than interject and help if something bad is happening, they just record it with their phone’s camera."

"I can't help but equate that with the one prison guard in our film who clearly thinks what the guards are doing is wrong but never says anything to stop it. We came up with the moment on the set where he takes his glasses off, because those glasses that cops and guards wear really remove their humanity in a way. You can’t see their eyes, therefore they might as well not be human. By taking the glasses off, that’s his character’s way of giving himself some humanity back, but he’s still not helping the prisoners out, so how much humanity has actually reclaimed?" –Kyle Patrick Alvarez

"The worst shifts were the night shifts where the guard who called himself 'John Wayne' dominated everything, causing his buddy, one of the fellow guards, to fall in line behind him. The third guard was really upset about it and never did any of the bad stuff, so the other two guards made him be the runner, the guy who gets the food for them. He said at one point, 'I hate being a part of this system that abuses other people; I'm thinking of becoming a prisoner,' but he didn’t, and not a single time did he ever face up to the other two guys and say, 'Hey, we’re only getting 15 bucks a day here! We should just sit in our guards chamber and play cards.' He never did that."

"There were two other guards in different shifts who had similar reactions, so they were essentially the 'good guards,' but only by default. They never did anything to make life better for the prisoners. They never intervened or active bystanders—they were basically just observers, but they could have been heroic. So what makes them the good guys, then?" –Dr. Philip Zimbardo

"That's one of the ideas that I want this film to bring across: if someone does nothing in the face of something inhumane, why are they any less in the wrong than the person who's doing that inhumane thing?" –Kyle Patrick Alvarez

The Subtle Power of Authority
"It was rare that me or my graduate students were ever on the ‘yard.' it was only when there were serious confrontations or when the prison chaplain came down and we did interviews on the yard. I’d watch the video tapes and see that, there I am, walking down the yard with my hands folded behind my back, which I never do, but that’s the posture of someone who’s reviewing his troops. I couldn’t believe I was doing that; I said right to the screen, ‘What the fuck are you doing?’"

"I realized that I was acting like an authority figure—I was playing that role. But in real life I worked very hard not to be looked at as an authority figure. At Stanford, the kids call me 'Dr. Z,' or 'Phil'—nobody says 'Dr. Zimbardo.' I've worked really hard at being an authority for my wisdom and intelligence, not for my wisdom, and there I was doing it. For me, that was the first stunning realization that I had changed."

"In the real experiment, the undergraduate student who I assigned to play the prison warden was an undergraduate; he was the same age as some of the students playing the guards and prisoners. Plus, he was a really short guy. But when he stepped on the yard and said, 'These are the rules,' I saw this passive, nebbish kid in a whole new light—he looked bigger, taller and more imposing. That’s what seeing someone in a position of authority can do to you." –Dr. Philip Zimbardo

The Psychology of Police Brutality
"The kids in this experiment had only been ‘guards’ for less than a day before they started buying into their newfound authority and started abusing it, but think about people who’ve been cops for multiple years. They’ve had all that time to fall into the authority of it. When we talk about police brutality, we have to keep in mind that, yes, these are bad things, but you want to look at the system. If we want to fix the problem here, you shouldn’t look at each individual case—you should look at the system that’s produced these cops."

"In many cases, cops and prison guards are very good at their jobs, love what they’re doing and put their lives at risk everyday, so you almost want to look at it with compassion and say, 'Wait a second, there’s a human nature element we need to consider here.' We need to look at what having that kind of power does to a person over a very long period of time. We should then put some systems in place that acknowledges how these positions transform people and put practices in place that can help control that or guide these people through managing that better." –Kyle Patrick Alvarez

"It's not just the uniform that transforms people. Look at the differences between policemen and firemen. After 9/11, I was president of the American Psychological Association, in New York, and I arranged to have treatments for the families of the firemen who were killed in the Brooklyn Fire Department. What I discovered was, every firemen’s station is treated like it’s a family—many of them are connected, and there was a big Irish-American component in that particular department. They wear uniforms and their job is saving people, the same as with cops, but firemen have this really tight-knit family unit behind them; cops, on the other hand, mostly work alone or maybe have one buddy with them if they’re in a car. Cops don’t have the same sense of family or camaraderie. Younger cops don’t feel they can go to older cops and say, 'Hey, I'm not sure what I should do in this situation—what would you do?'"

"To me, there’s a fundamental difference there. It's not something where you put somebody in a uniform and give them power and they abuse it. Firemen rarely abuse their power—in fact, if anything they make the mistake of helping people when they shouldn't, when the fire is too far-gone and they become dead heroes rather than live heroes." –Dr. Philip Zimbardo

For more information about the real-life Stanford experiment, watch this in-depth BBC documentary: