How Ava DuVernay's SELMA Can Inform Our Post-Charleston Actions

In the wake of the tragic church shooting last week in Charleston, South Carolina, people are looking for answers and ways to proceed. They should look at one of last year's timeliest films. 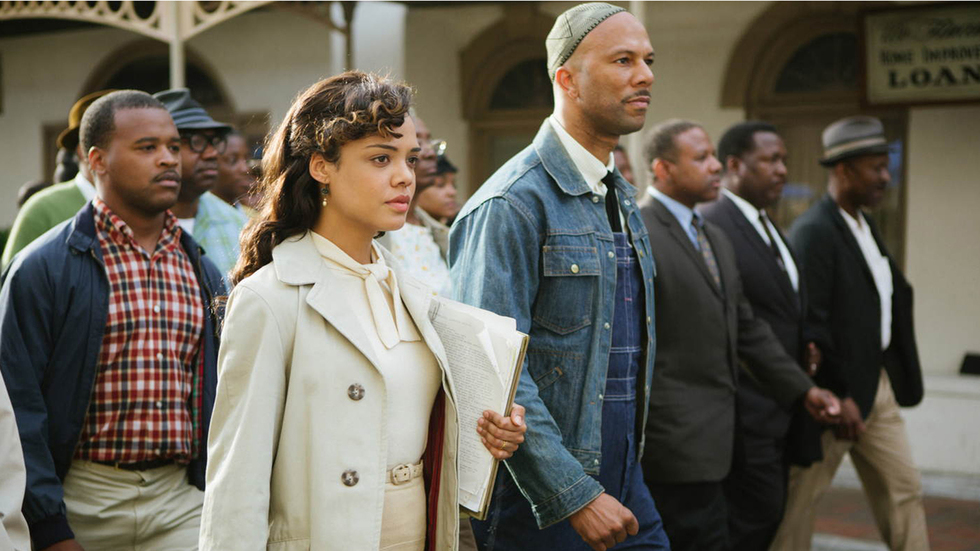 It begins in tragedy. Unfortunately, awareness and change almost always begin in tragedy.

Over the last week, social media and TV news broadcasts have turned Dylann Roof into someone whose face is now as instantly recognizable as Justin Bieber. That bowl-shaped haircut; those cold, hate-filled eyes—his is the face of a monster. Roof, a 21-year-old white resident of Lexington, South Carolina, took the lives of nine innocent black men and women last Wednesday evening in Charleston, SC, when he opened fire inside the Emanuel African Methodist Episcopal Church.

If the majority of American media outlets had their way, Roof’s face would be the face of this national tragedy, but that hasn’t been the case. Through the efforts of Twitter-savvy activists like DeRay McKesson and Shaun King, the Charleston victims are rightfully the most important aspects of what happened there. Their faces, not Roof’s, should be what remains from last week’s tragedy. There were nine lives lost, and now there are nine sets of family members and friends who are enduring through unfathomable pain. They're the ones who deserve the world’s undivided attention.

To better understand why, TV news producers could learn a thing or three from Selma director Ava DuVernay. Her film, which deservedly earned a Best Picture nomination and anchored her on-stage Tribeca Film Festival discussion with Q-Tip, looks at how, in 1965, Dr. Martin Luther King, Jr., and numerous Civil Rights leaders organized protests and marches across the Edmund Pettus Bridge to motivate lawmakers to give African-Americans the right to vote.

DuVernay’s inspirational Selma begins in, that's right, tragedy. In September 1963, four young African-American girls are enjoying their day inside the 16th Street Baptist Church, in Birmingham, Alabama, chatting about hair, as little girls often do. But then a bomb, planted by members of the local Ku Klux Klan, decimates the church. There’s no shot where the audience can see the KKK members placing the bomb inside the church. Instead, DuVernay captures the moment through the little girls’ point-of-view. It's painfully subjective.

And in the subjectivity, it's crucially singular. In Hollywood's mostly non-inclusive system, stories about racial oppression and the systemic prejudices that have plagued America for centuries are rarely, if ever, told by black filmmakers. When that does happen, it's normally done independently, like with Ryan Coogler's Fruitvale Station. But with Selma, DuVernay and her team, notably co-led by black cinematographer Bradford Young, bucked the norm and gave one of the most important episodes in black history a palpable authenticity.

Through her film, DuVernay's been able to educate millions who may not have otherwise considered not only what exactly it took for MLK to provoke change but the dozens of other activists who worked alongside them. Such as, for instance, the Southern Christian Leadership Conference (SCLC), the organization through which Dr. King was able to make his power moves in Selma. DuVernay's film also demonstrates how current issues taken on by the #BlackLivesMatter movement have been existing for more than 50 years. One of the film's most heartbreaking scenes depicts the murder of 26-year-old Jimmie Lee Jackson (played by Keith Stanfield), a young MLK supporter who was beaten and gunned down by cops in a cafe following a peaceful protest.

In both Jimmie Lee Jackson's death and the opening church bombing, Selma vividly connects the past to the present. The similarities between Selma’s 1963-set opening sequence and Charleston 2015 are particularly troubling and unavoidably obvious.

Been thinking about that too, @Jidenna. Unfortunately, the past is not past. https://t.co/FNniZXmcdN
— Ava DuVernay (@AVAETC) June 18, 2015

On the one hand, the parallels between Selma’s historical narrative and the present-day reality demonstrate how some things never change, but also that they can, in fact, change if people use moments of tragedy as calls to action. And DuVernay, an expert filmmaker and intelligent storyteller, begins Selma, a cinematic rallying cry if there's ever been one, by honoring the victims, not analyzing the perpetrators. She gives the tragedy its proper face.

As DuVernay discusses in this MSNBC interview, she made painstaking efforts to portray the victims as truthfully as possible. For her, they needed to be as real as the viewer’s own daughters and/or sisters:

Even if you’re aware of the event, whether from general knowledge or Spike Lee’s powerful 1997 documentary 4 Little Girls, the church bombing in Selma is a huge, blindsiding shocker, meticulously staged by DuVernay to amplify the situation’s horror. There’s no Alfred-Hitchcock-style “bomb under the table” forewarning. There’s just the unexpected and jarring blast that disrupts the girls’ conversation. In the destruction’s aftermath, DuVernay’s camera ignores the rubble and focuses on the girls’ dresses and shoes, to show the humanity and innocence that were lost.

In an interview for NPR’s Fresh Air, DuVernay further explained how she handled Selma’s alarming opener:

“I was much more interested in reverence for the girls. It was important to me that you hear their voices. You hear what their concerns are at that moment as four little black girls walking down a staircase in what should be a safe place, in their sanctuary, in their church. They're talking about hair. They're talking about Coretta Scott King's hairstyle. They're talking about what little black girls talk about—getting your hair wet and keeping it pressed and doing all that kind of thing. You start to come into their world just as they are taken out of the world. And so from there, what is the next thing to show? Is it shrapnel? Is it fire? For me it was the fabric of their dresses and their patent leather shoes, all of the things that remain from the souls that were lost.”

There’s no footage from inside Emanuel African Methodist Episcopal Church, nor should there be, but there are ways to treat the victims akin to how DuVernay humanizes the four little girls through their Coretta Scott King conversation. News outlets should keep the focus on the Charleston victims’ family members, allowing them to remember their loved ones in front of nationally televised cameras, letting the world know what their interests were, what they enjoyed reading and watching, what they were like as brothers, sisters and parents.

After the bomb goes off in Selma, DuVernay uses her film to energize the audience. In response to the 1963 incident, civil rights leaders Diane Nash (played by Tessa Thompson) and James Bevel (Common) called on Dr. Martin Luther King, Jr. (David Oyelowo) to help them fight towards the passing of the Voting Rights Act in 1965. With its brilliant acting, assured direction and emphasis on positivity, Selma salutes the men and women who turned the Birmingham tragedy into a catalyst for empowerment.

Similarly, every time someone tweets, writes and/or talks about those who lost their lives in Charleston—Depayne Middleton Doctor, Cynthia Hurd, Susie Jackson, Ethel Lance, the Rev. Clementa Pinckney, Tywanza Sanders, the Rev. Dr. Daniel Simmons Sr., Sharonda Coleman-Singleton and Myra Thompson—instead of about Dylann Roof, they’re doing right by those who aren’t here to speak for themselves.

Social action almost always begins in tragedy, but it should never remain there.