Linklater's 'Dazed and Confused' is turning 20 years old, reminding us all how good the man is at melding music and movie together. Help celebrate 20 years of Wooderson and Randall "Pink" Floyd with this mix of the best songs from Linklater's movies. 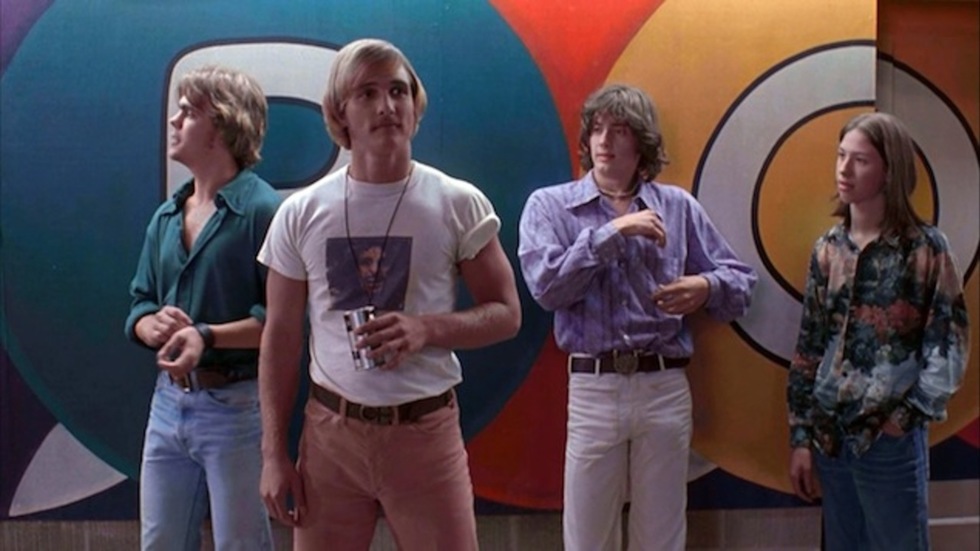 01. "Sweet Emotion," Aerosmith (from Dazed and Confused)
The perfect fade-in for Linklater's 1976-set film about high-school aimlessness, Aerosmith's tune is both nostalgic and also pretty current for the time the film was released (as Aerosmith was embarking upon a big comeback).

02. "Touch Me," The Doors (from School of Rock)
Most movies with rock as the general theme would end up utilizing The Doors through the prism of a lionized Jim Morrison. Kudos to Linklater for making this a Ray Manzarek moment, with Jack Black's teacher using the song as a keyboard tutorial.

03. "Slow Ride," Foghat (from Dazed and Confused)
The Dazed end credits were a showcase for its truly incredible array of young talent that had yet to emerge. But the open-road final scene was a stellar fit for a drawling guitar anthem like "Slow Ride."

04. "Come Here," Kath Bloom (from Before Sunrise)
One of Before Sunrise's best scenes (in a movie full of them) was when Jesse and Celine hit a record store and listened to this beautiful little song. To say they bonded over it is vastly underselling the moment.

05. "School of Rock," The School of Rock (from School of Rock)
So much of this movie builds up to the big Battle of the Bands. It would have been a huge letdown if the band's big song wasn't a crowd-pleaser. Good news, then!

06. "School's Out For Summer," Alice Cooper (from Dazed and Confused)
It's used in the most literal way possible in the film, but I'm not sure you can really use it any other way.

07. "Ballade 4," Classical (from Waking Life)
A little dip into instrumental in the middle of your mix, if only to give a nod to how much the musical choices bring the eye-dazzling animations of the film to life.

09. "The Alien Song," Milla Jovovich (from Dazed and Confused)
We only here like three seconds worth of Jovovich's stoner delivery of this song about … flying away? No idea. But it's a fine nod to one of Dazed's many peripheral characters.

10. "Tuesday's Gone," Lynyrd Skynyrd (from Dazed and Confused)
Kudos for finding a song that captures the exact air of melancholy to match the phrase "keg's kicked."

11. "A Waltz For A Night," Julie Delpy (from Before Sunset)
Calm yourself, maybe drink some wine, and unwind as Julie Delpy sings sweetly to you and you begin to imagine why Ethan Hawke ended up staying with her at the end of that movie.

12. "Long Way To The Top," AC/DC (from School of Rock)
A stellar closing-credits moment makes for a stellar mix-closing tune.