New movies about Julian Assange and Steve Jobs look like superhero films disguised as biopics. Will the Hillary biopic get the same treatment? 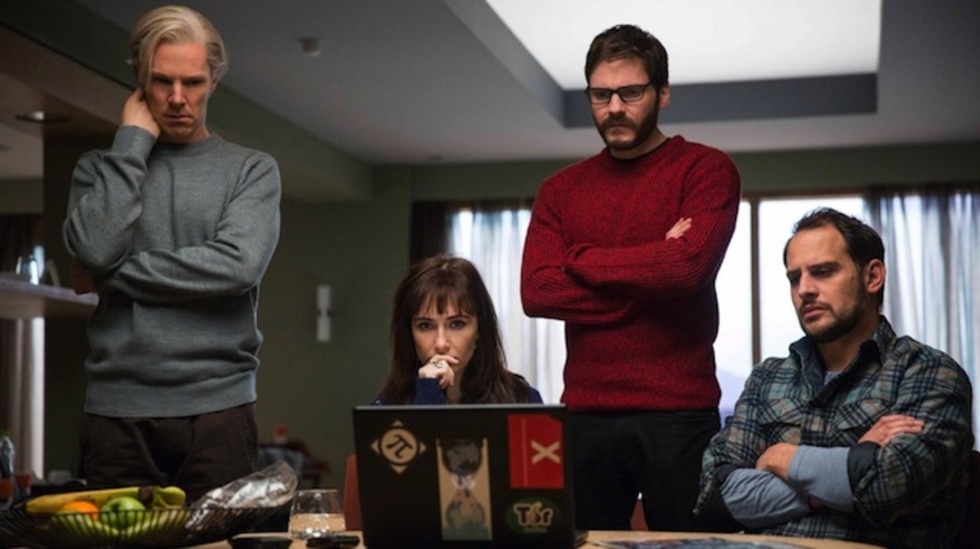 This week, Dreamworks released the trailer for The Fifth Estate – the first WikiLeaks feature film, though if its subject has anything to say about it, probably not the last. WikiLeaks immediately issued a warning about the trailer upon its release: “Don’t be fooled. It implies we gave Iran nukes and killed 2,000.” While WikiLeaks has been left unmoved by the trailer, many others might not be, for the trailer aims to do just that – to move its viewers.

Directed by Bill Condon, The Fifth Estate presents a trailer with dramatically sweeping cuts, a building soundtrack, and shaky hand-held close-up pans over anxious faces. The whole thing looks like a cross between The Social Network, A Beautiful Mind, and The Matrix. And, of course, there’s a (super?) hero at the center of this film as well – Julian Assange, portrayed with uncanny precision by Benedict Cumberbatch.

With its oratorical, almost predestined, male hero, The Fifth Estate might recall, well, just about any Hollywood film meant to inspire and relieve American viewers during these precarious times. Man of Steel, Pacific Rim, Avatar, Looper immediately come to mind, but also, more closely related to the film’s subject, political thrillers such as Argo, Lincoln, or The Ides of March. If the veracity of the whole film weren’t – as WikiLeaks has already demonstrated – up for debate, The Fifth Estate might as well be framed as the next superhero blockbuster.

But the film also solicits comparison to another forthcoming biopic – Joshua Michael Stern’s film on the life of Steve Jobs. The film, simply titled Jobs, has Ashton Kutcher playing the lead in a role not too dissimilar from Cumberbatch’s. As the intertitles of the Jobs trailer boldly announce: “It Only Takes One Person... To Start A Revolution.”

Hollywood trailers aren’t known for originality, but between them, Jobs and The Fifth Estate make sure to include all the elements that signal Exciting Movie About Technology: scrolling coding, shots of screens, men in suits, large glasses, and Ashton Kutcher posing like Jesus in a wheat field. Inspiring voice-overs by their male heroes are also helpful, helping to establish both their command and omniscience over the message of these films. As Cumberbatch’s Assange tells us: “If we can find one moral man, one whistle-blower; someone willing to expose those secrets, that man could topple the most powerful and most oppressive of regimes.”

It’s already difficult enough to see how women can even play a supporting role in the lives of leading men like these.

Even as he purports to oppose ideology, though, he upholds it. In the Jobs trailer, Kutcher’s voiceover salutes “the crazy ones, the misfits, the rebels,” but in the land of summer blockbusters, that character is the standard. And frankly, it’s not all that inspiring.

The repertory – the very film language – that conveys central heroines is far less rehearsed. Very few women get the spotlight when it comes to leading technological revolutions, and thinking of a recent female-led political thriller, The East, its heroine was emphatically under-cover, rather than giving lectures or throwing public tantrums.

Even the forthcoming Hillary Clinton biopic suggests how hard it is to fathom how a woman might play a leading role in the story of her own life. This film about Hillary Clinton’s rise to power is in still in development, but it seems to focus on a personal moment in her life that happened to be part of history (Watergate), but in which she wasn’t the main player. This is, in truth, more accurate to how history does happen, but if we were to accept the idea that political movements aren’t single-handedly spearheaded by tortured, rebellious men, then where would Hollywood be?