We sat down with director Azazel Jacobs to discuss the new HBO series 'Doll &amp; Em' and how character-driven stories don't necessarily have to be slaves to plot. 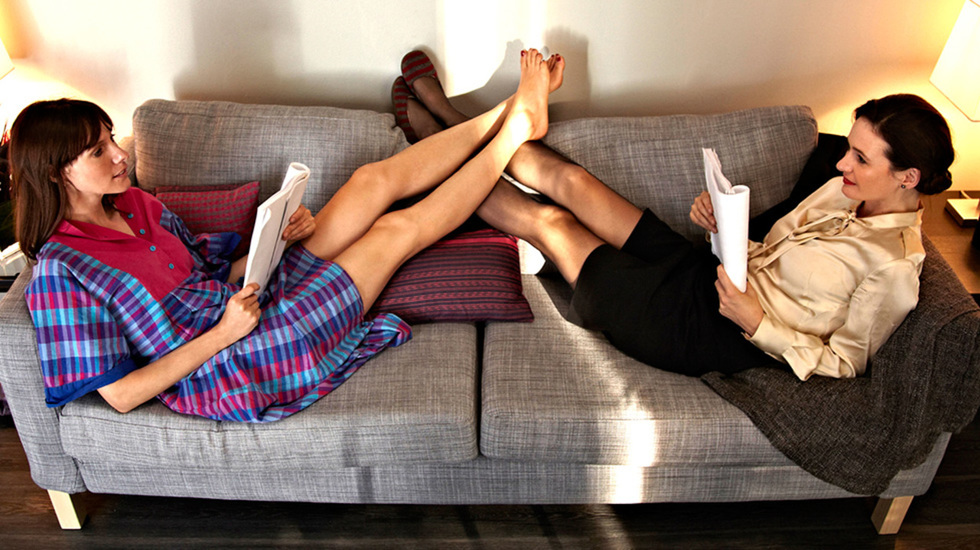 During a recent interview with Azazel Jacobs, I quipped that his new HBO series, Doll & Em, feels like a TV show directed by Cassavetes. No sooner had I said it than I realized just how true this felt; the series, which concerns the deepest nuances of the profound friendship between stars Emily Mortimer and Dolly Wells, is filled with plenty of wit and warmth, but on a more primal level is engaged in the kind of deep character study work that makes Cassavetes such a fascinating filmmaker.

The series has a plum launch pad for such character study - its characters are merely fictionalized versions of the actors portraying them, Larry David-style. Mortimer plays herself, and Wells too, and the series concerns what happens when Wells moves to LA to become Mortimer's assistant during a film shoot. At 22 minutes per episode (and there are only six) the show moves at a quick clip and displays the lightness of a sitcom at times, but probing beneath that surface level is something more wounded, more honest, and far less commonly found on major cable television, notwithstanding the excellent status of TV as an art form in 2014. I had the pleasure to sit down with Jacobs recently and hear about the making of the series.

Tribeca: Did you conceive of this story as an episodic narrative, a film, or something in between?

Azazel Jacobs: An episodic miniseries that was self-contained. There was no conversation of doing something that was beyond six parts. We wanted a full arc, we wanted to approach this like a film. But because such good TV is happening right now, I got inspired by the idea of not having to deal with transition scenes. I felt like having a credits moment at the beginning of each episode allowed the story to refresh. Obviously people will watch this as one whole piece, but I liked the idea of taking advantage of being able to start the story over each episode.

Telling a story is the least of my interests - I'm interested in exploring characters, human beings.

Tribeca: Kubrick talked about a film being comprised of six to eight sequences that could stand on their own, but would turn into a greater story when placed alongside each other. It's a bit like what you wanted to do, narratively.

Azazel Jacobs: Exactly. I start with six to eight images when I make a movie, I try to find a map between the images. That's what drives me.

Tribeca: Why is it freeing to not have to do the transition scenes with this? Do you feel more obligated to show every plot development with making a movie?

Tribeca: Why can't you do that in a movie?

Azazel Jacobs: Well you can. I mean, the greats do it in narrative filmmaking, but it's a huge challenge. Cassavetes, Altman. Maybe I'll be able to do that on my own. But this seemed like a great way to do that. But aiming for great TV - it's nothing new, we've got Twilight Zone, Singing Detective - but right now TV seems like the best of the best. Enough people seem really willing to go anywhere.

Tribeca: I was struck by how visual the series is, considering that it's TV and it's a relationship story, it's not a more fantastical storyline. How did you find your way to working visually?

Azazel Jacobs: Well, I had more days on this than on any film I've made, and I worked with the crew I've always worked with. I've been working with my DP on this, Toby, for a long time. I'm glad you felt that way because I want to be able to express something visually, I'm not just going for an over-the-shoulder shot. The great thing about being able to have a past body of work is that the language created on previous films can be used for what comes next, and that helps Toby and I figure out what we want to say visually.

For me, the Hollywood thing is completely secondary - this is not Entourage, it's not Extras, it's about a real friendship between two people.

Tribeca: It feels a bit like if Cassavetes directed a TV show, this is what it would look like.

Tribeca: (Laughs) So much of TV is about showing peoples' faces. This show is that, it is a lot of close-ups of faces, but it's done with a poignancy not found in how most TV shows are shot.

Azazel Jacobs: There wasn't an intention other than - we had something real on our hands. At the base, we had a rare friendship between two people. I've never seen a relationship between two people that has gone on for this long, and they've turned it into a creative relationship! I felt that if we could keep the series grounded in that truth, that the center of all this was something that couldn't be acted, I felt like that would make the tone work.

Tribeca: How did you become involved with Emily and Dolly?

Azazel Jacobs: We all met when I was going to AFI - they helped me with a film I was working on at the time, this was around 2000. We kept watching each others' works at festivals and whatnot, and we kept trying to find something we could do together. So they came to me with the initial idea for the show - what if Doll was Emily's assistant? - and that's where it started from.

Tribeca: What was working with the emotional live wire of such a strong friendship like? It's an incredible creative basis to start from.

Azazel Jacobs: A lot of my job was to get in between them. They have their own language, they have a shorthand, they don't have to talk that much, or they talk a lot but it's tough to understand what they're really saying. So a lot of it was understanding what they were saying and slowing things down so I could get in between them in order to make the scene work for the audience. Maybe directing is always like that, except you don't usually have your characters right there in real life - normally they're just in your mind.

Tribeca: It's pretty fearless for them to put their friendship out there in the manner that they have.

Azazel Jacobs: That's why I pushed hard for it to be called Doll & Em. I felt like it was a credit to them that their friendship made the show a possibility. For me, the Hollywood thing is completely secondary - this is not Entourage, it's not Extras, it's about a real friendship between two people. I was interested in the two of them, I wasn't interested in telling an All About Eve-type story. We reference that enough that you know that's what's going on, but I was less interested in the story and more interested in exploring the emotions between the two characters.