With a prominent role in 'Lee Daniels' The Butler,' Oprah Winfrey is once again dipping her toe in the acting pool. But how has her dominant persona -- America's televisual queen of life advice and benevolent charity -- manifested itself in her various film projects? We've ranked nine of her most prominent roles to see which were most Oprah-like. 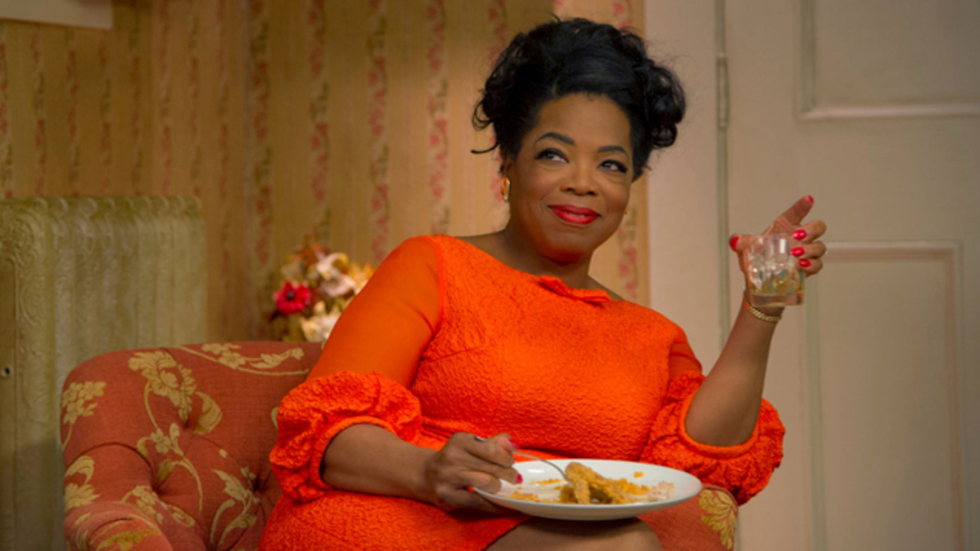 9. Sethe in Beloved: Part of what's striking about Oprah's portrayal of the lead character in this Toni Morrison adaptation (and long-time Oprah passion project) is how much the character deviates from what had, by 1998, become Oprah's predominant personality: the empathetic, benevolent, all-seeing, all-knowing queen of television. Sethe's story is predicated on her powerlessness in the face of slavery, her hard choices because of it, and her actions are far from benevolent.

8. Sofia in The Color Purple: Similarly to Beloved, The Color Purple does not see Oprah's character in a position of power at all. Sofia is bumped up this list ever so slightly because the function she serves in Celie's life is a bit closer to the empathetic advice-giver ideal that Oprah would one day represent.

7. Gloria Gaines in Lee Daniels' The Butler: So it's becoming apparent that, among the few roles that Oprah takes in the movies, a good many of them almost purposefully run counter to her reputation. Gloria is an alcoholic, slightly crass, certainly falling short of beatific benevolence. That said, her most enduring line in the film is bound to be the one where she sets her son straight: "Everything you are and everything you have is because of that butler." Careful, Gloria. Your Oprah is showing.

6. Mattie in The Women of Brewster Place: Oprah's TV movie work nudged her more in the direction of the all-knowing presence we're used to. Here, she plays a mother and (however reluctant) crusader.

5. Gussie the Goose in Charlotte's Web:
4. Eudora in The Princess and the Frog:
Two voice-over roles that set Oprah in the role of a kindly mother type.

3. Therapist on Ellen: When Ellen Degeneres needed a guiding hand for her character in the much-publicized and remembered "Puppy Episode" (a.k.a. the one where she comes out), she of course turned to Oprah. As Ellen's therapist, Oprah managed to summon all the wisdom, empathy, and kindness that she had always evinced on her talk show. The therapist-as-God-figure incarnate.

2. Zora Williams in Before Women Had Wings: More TV work, this time with Oprah absolutely ensconced in the role of benevolent mother figure who swoops in, tells everybody how to live their best lives, and rights the wrongs of beleagured mothers and daughters while being compassionate to both sides.

1. Oprah Winfrey on 30 Rock: It makes sense that the ultimate Oprah role would be ... Oprah. Of course, as this 30 Rock episode ("Believe in the Stars") unfolds, we see that "Oprah" isn't exactly Oprah. But even after we find out that Liz Lemon hallucinated and mistook a hyper-confident tween for O, the specter of Oprah as preeminent life guru remained. Admit it: you were intrigued about calypso, sweater-capes, and high-heeled shoes that tone your butt.