Onur Tukel On Neuroses And Vampires in ‘Summer of Blood’

“Our culture celebrates self-absorption.” We talk to the writer/director/star of ‘Summer of Blood,' a horror/comedy that celebrated its world premiere at TFF 2014. 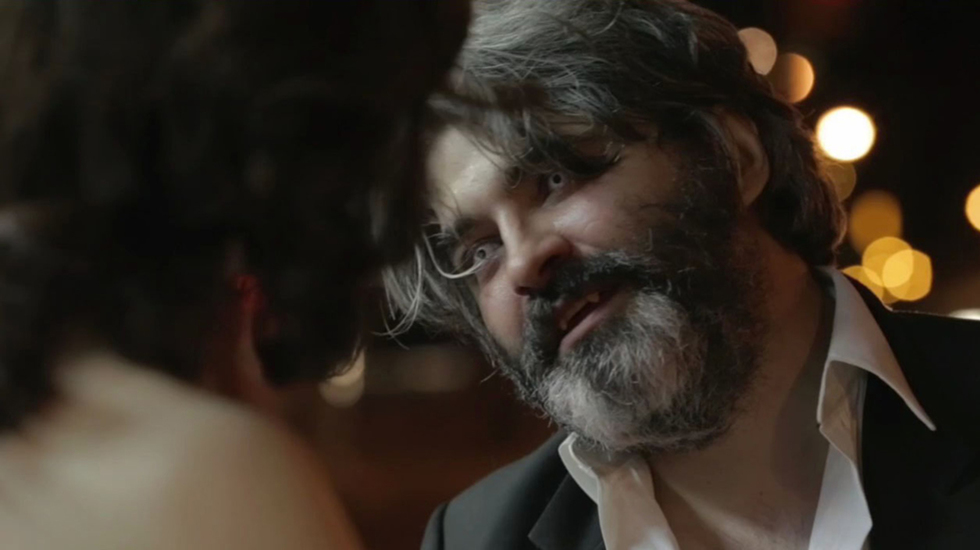 Rarely does a movie make audiences laugh, scream and think at the same time. Onur Tukel accomplished this feat with Summer of Blood, his latest film that delighted crowds at this year’s Tribeca Film Festival. In addition to writing, editing and directing the film, Tukel stars as Eric, an emotionally stunted New Yorker approaching his 40s who is s consumed by his insecurities and fear of commitment, especially to his long time girlfriend. When he is bitten by a vampire in Brooklyn, Eric’s emotional issues briefly take a back seat to his hunger for blood. After accepting his new life the undead, Eric hits the dating scene with renewed vigor only to learn that even supernatural beings aren’t immune to existential dilemmas.

We got a chance to chat with the filmmaker about his TFF experience, horror movies and why he sees New York City as a type of purgatory.

Tribeca: Summer of Blood opened the Midnight section at TFF 2014.  Can you talk about your experience at the festival?

Onur Tukel: The Festival’s amazing. We had the opportunity to screen the movie four times. I didn’t even need a publicist [laughs] because Tribeca took care of all that. There was no favoritism involved—they treated our film like they would any other film. However, we couldn’t help but feel special because we got so much press during the festival in terms of interviews and reviews.  Our budget was tiny, so it was a real honor to be treated like we had a legitimate movie with big stars.

I think part of being a New Yorker is that you see so many insane things happening that you are just very matter-of-fact about them.

Tribeca: How did Dark Sky Films get involved with the release?

OT: Genna Terranova suggested we get a sales representative for the film and recommended the crew at XYZ Films. XYZ Films in turn helped us get our movie into the hands of Dark Sky Films. I thought we would need to spend several months screening the movie at other festivals after Tribeca before we eventually sold it. However, the movie was picked up just a few weeks after Tribeca. It was great!

Tribeca: It was so cool to see your inventive take on vampire genre. You play the most neurotic vampire I’d ever seen. What was the impetus behind the film and the creation of Eric Sparrow?

OT: I’m getting a little more neurotic every year. I’m older but I haven’t quite settled into a life that is more secure. To some degree, I imagined that by the time I was in my 40s, I would have my shit together. Not the case.  Four years ago, I uprooted myself from North Carolina and came to New York to for a change of scene, and I’m not good with relationships either [laughs]. I often wish I could commit to something that would allow me a little stability. Right now, I have a freelance job that could go away at any moment.  It worries me.

This movie is about the anxieties that come with being in your 40s—a time when you are supposed to be married with kids and a steady job—and still not having any clue about you’re doing in life. The character of Eric displays all my neuroses, but he is definitely more obnoxious than I am. I wouldn’t say all of the hurtful things he says, though I’ve always been drawn to characters like him who serve as provocateurs.

Tribeca: In a way, it is an interesting movie about the difficulty of commitment.

OT: I’m usually in a relationship for about 3 years and then I start getting nervous about the specter of living with the same person for the rest of my life. I very much respect someone who can make the leap to commit to someone else, but I find it difficult. We live in a culture that seems to celebrate self-absorption, so it is important to consider our priorities.  In Summer of Blood, I am asking whether we should celebrate people’s commitment to other people and their community rather than to themselves. This movie, in a way, is about me coming to terms with myself and my own selfishness [laughs]. I don’t know if I’m capable of changing. I hope I am

Tribeca: While you’ve done horror movies before, Summer of Blood is your first horror-comedy. Has the genre always interested you? Did you watch anything for reference before filming?

OT: There are several films that influenced this movie. One is this great movie from the 80s called Vampire Kiss with Nic Cage. Cage’s character is very self-absorbed until he gets bit by a “vampire.” Another is American Psycho, a film whose anti-hero has these delusions of grandiosity but ultimately is just a colossal  dick.

My favorite horror movies over the years were always the ones that had comedic elements. American Werewolf in London is a hardcore werewolf movie that’s also really funny. Freddy Kruger had all these one-liners to punctuate his kills. In terms of comedies, my biggest influences are Woody Allen, Richard Linklater, Spike Lee, and filmmakers like them who make dialogue-driven movies with heavy existential themes.

Tribeca: I think Summer of Blood is so much a New York film. How did you balance the supernatural events with everyday life in the city?

OT: I think part of being a New Yorker is that you see so many insane things happening that you are just very matter-of-fact about them. If you were in say, Durham, North Carolina, and you saw a crazy man on the street screaming, people would be alarmed. In New York, people just accept that kind of behavior and keep going. You can see something terrible happening, and 20 seconds later when you cross the street, it’s a distant memory. New York is a perfect merging of the fantastic and the mundane. It doesn’t feel like a real place—it feels like a type of purgatory. I feel like I died at 38 in North Carolina and was reborn in New York.

If you have a limited budget, you have to be open to improvisation on all levels. You have to constantly be in the moment and gather information based on what’s in front of you.

Tribeca: I think you must have a sense of humor to live here. I loved the Star 80 reference made by one of the characters. It was so spot on. Do you encourage improv on set?

OT: It’s a pretty dark reference [laughs]. For the most part, what you see on screen is scripted. However, we would come up with things to say in the moment. In the scene right before the Star 80 reference, another actor and I hurled insults at each other. We decided to ignore the script and be spontaneous. We didn’t really rehearse, and I told the actors to memorize the context, but not necessarily the content of the script. We rarely got the words 100% right. If the cast put the dialogue in their own words, that was fine. That’s how we approached it, and it worked out well.

I didn’t want to direct anyone.  I just wanted to surround myself with really good actors that I didn’t have to micromanage. I wanted everyone to take ownership of their performances. We wanted to have a good time.

Tribeca: You also edited the film. How did you juggle the multiple responsibilities of writing, directing and editing. Which was the most difficult?

OT: If this had been a big-budget film, I wouldn’t have had to do all those tasks. However, part of the reason I love low-budget filmmaking is that you can do all those things. We were shooting with two cameras, which made editing a lot easier. The hardest part was keeping myself together during the months leading up to shoot when I was finding money and trying to organize it all. When I make movies now, I don’t do a lot of planning because things just change. If you have a limited budget, you have to be open to improvisation on all levels. You have to constantly be in the moment and gather information based on what’s in front of you.  I may never have a lot of money to make movies, so I have to deal with that reality.

In my situation, shooting on video even with two cameras is better in many ways than shooting with one camera on film. Itt allows me to capture more spontaneous performances from the actors and to shoot more quickly. I love well-shot, well-lit projects, but I’m more interested in pure performances. I think the actors’ realistic and charming performances were the reason that Summer of Blood was so well embraced.

Tribeca: I was really glad that it premiered at this year’s Festival.

OT: I would have never guessed in North Carolina that a film that I made would be accepted and embraced at a festival like Tribeca. I can’t thank the Tribeca staff enough for inviting us and giving us so much love and attention.

Summer of Blood is now available on iTunes and other digital platforms.