We talk to the British actor about playing multifaceted characters, working with Jake Paltrow, and what genre he’d like to explore next. 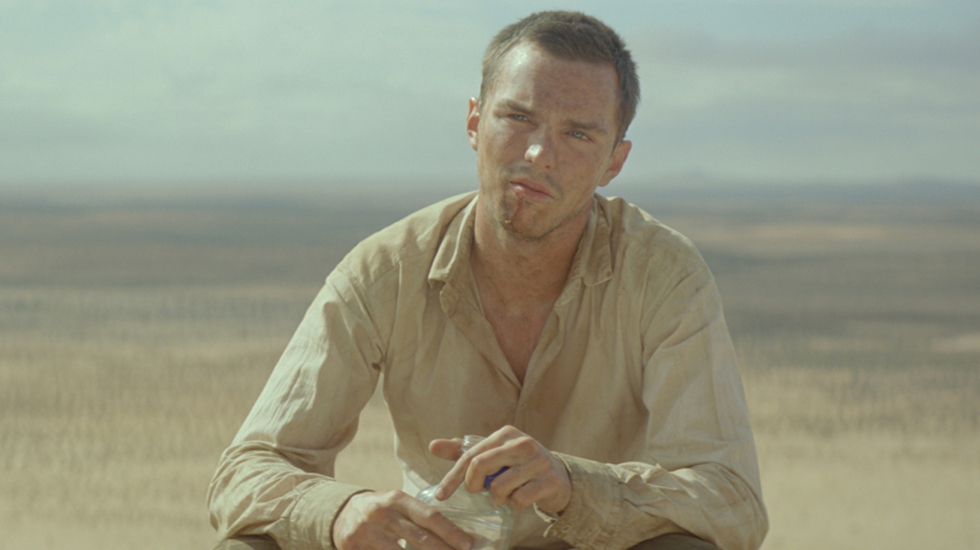 Set in the near future when water is the world’s most precious resource, Young Ones chronicles the struggles of Ernest Holm (Michael Shannon) as he tries to protect and provide for his family in a barren wasteland. Nicholas Hoult plays Flem Lever, an outsider with designs on Ernest’s daughter Mary (Elle Fanning), who will go to any lengths to claim Ernest’s land as his own.

We talk to the X-Men: Days of Future Past star about creating his character, collaborating with writer/director Jake Paltrow, and playing opposite Michael Shannon.

Tribeca: The Young Ones premiered at Sundance this year. What was that experience like?

Nicholas Hoult: It was the first time I went to Sundance, and I just loved it. It’s an odd place. It was like the circus came to town. It’s cool, though. I got to go and see Camp X-ray and some other really great films. Plus, I got to snowboarding, which was really fun. I also saw Big Boi randomly at a few places. It’s just all these strange worlds colliding in a very beautiful location.

Tribeca: As a young actor, I imagine a lot of scripts come your way. What stood out about Young Ones?

NH: It was the world that Jake [Paltrow] created. I was really fascinated by how this western futuristic landscape affected the characters—it was a very desolate, desperate time for people. It put these characters into an odd world.

With indies, you get on set and you can keep rolling. It’s small and intimate and you’re allowed a little more freedom.

Tribeca: When did you know you wanted to do the movie?

NH: I think once I started looking at the role of Flem. I thought, “wow, this guy does terrible things.”  The character forced me to ask myself if I—or anyone, for that matter—would do something similar if we were in this world and in those same circumstances. Who knows? Flem was just so different than the other characters I had been reading. Plus, Jake assembled this great cast with Michael Shannon, Kodi Smit-McPhee and Elle Fanning. I knew I’d like to give it a go.

Tribeca: Do you think Flem is just a straight villain? Or is he just doing what he can to survive?

NH: No, I don’t think he is. You can’t ever paint a character with one stroke of the brush, certainly not if you’re playing the role. I truly believe he does love Mary, Elle’s character. He’s doing the best he can under the circumstances, although sometimes his actions are not great. I don’t think he’s evil; he’s just someone who does bad things. Everyone does bad things occasionally, but Flem just takes it to the extreme [laughs].

Tribeca: How did you work with Jake to create the character?

NH: He gave me a lot of S.E. Hinton novels to read like Rumble Fish and The Outsiders. We talked a lot about avoiding cliches and not playing the role too one-leveled. He’s a very caring director and wrote a very well balanced script. Jake was so smart about the pacing too. I also like how he frames, directs and sculpts the scenes. He’s very talented.

Tribeca: If you had to pick one word to describe him, which one would you pick and why?

NH: I’d say artistic. He was very imaginative in all of his choices. He’s a real craftsman.

Tribeca: You mentioned Michael Shannon and I have to say, he’s a very intense screen presence. What was it like working with him?

NH: Yes, the man’s got presence for days! You sit there and you’re like, “he’s definitely winning the presence battle in this film.” [laughs] I watched a scene I had with Mike and thought, “please don’t cut back to me! This is dynamite what’s happening over here.”

I would try to grill him in the evening sometimes and be like, “when you were doing this scene, what were you thinking about in this moment? The way you delivered it was not what I expected when I read the script.” There’s so much going inside his head. I was pretty awe-struck.

Tribeca: I think Jake Paltrow is one of the first filmmakers to really utilize the landscape of Shannon’s face. Right?

NH: [laughs] Yes! He’s got a face that looks like it’s been carved out of granite, but in a great way.

Tribeca: What was it like filming in South Africa?

NH: It was good, really good. I had finished a film in Namibia just previously to this, so Africa was essentially home for 9 months. It was very hot and tough at times, but beautiful. The location really helped to tell the story.

Tribeca: Was there a scene that was a particular challenge to film? How did you work through that?

NH: There’s a scene towards the end of the film when I’m in a pit. That’s was really tough.

Tribeca: I’m sure having Kodi Smit-McPhee to play off of was a great help.

NH: Yeah, both Elle and Kodi are so smart and talented. The pit scene was very difficult to schedule too. I had a 2-3 page monologue, but because of the sun, we had to shoot all of Kodi’s coverage first. Sometimes, when you’ve done the scene a lot, it’s very difficult to keep it fresh and find new things. It was definitely the toughest day for me.

Tribeca: You’ve worked in blockbusters, indies and television throughout your career. What’s your favorite thing about working in an independent movie?

NH: I like the scale and the pace of indies better than big movies where you do a take and they tweak things for few minutes, then you do another take and they tweak again for 15 minutes. After they get that shot, they take another hour to set up the next one. There’s no rhythm to it a lot of the time. With indies, you get on set and you can keep rolling. It’s small and intimate and you’re allowed a little more freedom. Indie filmmakers let the cameras roll, and you can find stuff and play.

You can’t ever paint a character with one stroke of the brush.

Tribeca: Is Jake a director who likes rehearsal? Did you have a rehearsal period?

NH: No, not really. Because of everyone’s schedules, it felt like we were gunnin’ and runnin’ for the most part, to me at least. I was doing press for two other films at the time, so I was flying in and out of Africa throughout the shoot. I really had to hit the ground running and go for it.

Tribeca: Is it difficult as an actor to be taken out of that world and come back?

NH: It’s weird because I feel as though, within a week, things can completely change. It was difficult when I’d go out and do press in New York and then come back and think:  “wow, you guys are still here, I feel like so much has happened and changed. What’s happened in the week that I was gone?” They would say, “we just carried on making the film without you!” You just have to jump back in and go for it.

Tribeca: Have you found yourself changing your creative process as you continue to work and mature as an actor?

NH: Yeah, depending on each job. I don’t really have a set approach to anything. I just try to have fun, listen to people and learn.

Tribeca: Gone Girl is huge right now. I only mention that because you’re in the upcoming movie adaptation of another Gillian Flynn novel, Dark Places.

NH: Gillian Flynn is such a talented writer and a beautiful lady. She came on set and it was such a joy to meet her.

Tribeca: Is it strange to watch the hoopla surrounding Gone Girl, knowing that Dark Places is coming up?

NH: You know, I’ve had my head in the sand lately because I’ve been traveling and I just was in Asia working on a movie. I haven’t seen any movies in a while or kept up with pop culture. I love David Fincher, but I still see need to see Gone Girl.

Tribeca: Did you enjoy working on Dark Places?

NH: It was a great shoot. I had already done Mad Max with Charlize [Theron], so it was great to do something together again but only very different. We had actual dialogue scenes together [laughs]! She’s such a great actress so it was a really fun experience.

Tribeca: You’ve worked in a lot of different genres. Is there any genre you’d like to go to next?

NH: I’d love to do a full western at some point. I think I’d like to do a boxing movie as well.

Young Ones will hit select theaters and VOD/digital platforms on October 17.