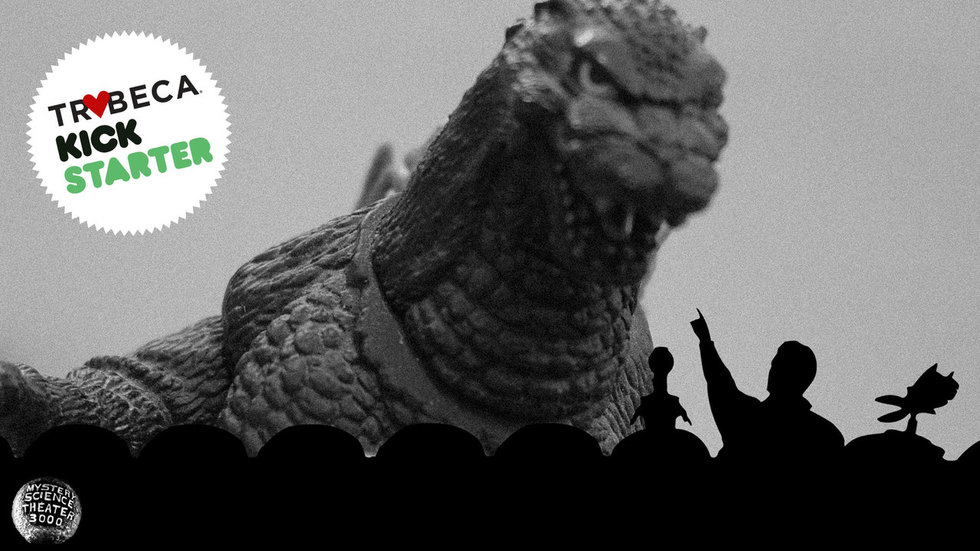 There's a "new" movie opening this weekend called Dangerous Men, from Drafthouse Films. There are quotations around the word "new" because it’s actually a couple of decades old, yet is finally opening in limited theaters this weekend because the Drafthouse Films team continues to do God's work. Dangerous Men is, technically speaking, a terrible movie—the actors have zero chops, the sound design and editing make the worst student films feel Kubrickian, and nothing makes any sense whatsoever. But Dangerous Men is also see-it-to-believe-it insane. It's unintentionally one of the year's funniest movies, especially if it's experienced with alcohol and in a theater full of like-minded lovers of junk cinema.

Dangerous Men is exactly the kind of movie that the fun-loving hecklers behind the infamous Mystery Science Theater 3000 would adore, and would mercilessly skewer for the sake of feel-great laughter. From 1988 through 1999, the hilarious TV series, also known as MST3K, celebrated the pleasures found in awful movies.

Creator Joel Hodgson and his collaborators always found the good within the truly bad. Hodgson, later followed by second host Mike J. Nelson, starred as a blue-collar janitor who's kidnapped by mad scientists and sent into outer space to endlessly watch crappy B-movies with the sentient robots Tom Servo (voiced by Kevin Murphy) and Crow T. Robot (voiced by Bill Corbett). They'd watch movies like The Slime People (1963), Santa Claus Conquers the Martians (1964), Attack of the Giant Leeches (1959), and Devil Fish (1984), and, while seen at the bottom of the screen in black theater-seat-bound silhouettes, crack jokes about every ridiculously inept thing seen in the films.

MST3K, which aired on Comedy Central and the Sci-Fi Channel throughout the '90s, was way ahead of its time, preceding the current movie-lambasting culture found by the minute on Twitter, in chat rooms, and across Facebook. There have been numerous copycats and rip-offs, and to combat the creative thievery, Nelson, Murphy, and Corbett launched Rifftrax in 2006, through which they'd provide online MST3K-like commentary tracks for cinematic dreck like the Jennifer Lopez/Ice Cube disaster Anaconda (1997) and, naturally, Sharknado (2013). Rifftrax's first-ever New York City live performance happened at this year's Tribeca Film Festival, where the snarky trio roasted Tommy Wiseau's legendary misfire The Room (2003). Judging by that event's enthusiastic and full TFF crowd, the old MST3K spirit is still in full effect.

Which is why we're so pumped about Joel Hodgson's new Kickstarter campaign. Unveiled earlier this week, his crowdfunding project has a clear and very welcome mission: to bring Mystery Science Theater 3000 back. The ultimate goal is to produce upwards of 12 new episodes; they've already collected $1.4 million of the targeted $2 million, which needs to be met by Saturday, December 12. The initial 2-mil will enable Hodgson and company to make three episodes and get them started towards a $5.5 million total for an entire season.

Rather than singing MST3K's praises any further here, we'll let the show speak for itself. Enjoy these excerpts from some of MST3K's funniest episodes. And then just try to resist the urge to hit up Kickstarter and donate. It'll be futile.

To support Mystery Science Theater 3000, head over to its Kickstarter page and donate. And once you've done that, check out (and back!) other Kickstarters we love here.