My Afternoon With Hollywood's 'Director's Guru'

I kept reading references to Jill Soloway's "Director's Guru" in interviews about her new film 'Afternoon Delight,' so I set out to investigate. Turns out many directors whose names you know are speaking a new language of storytelling thanks to Joan Scheckel's advice. 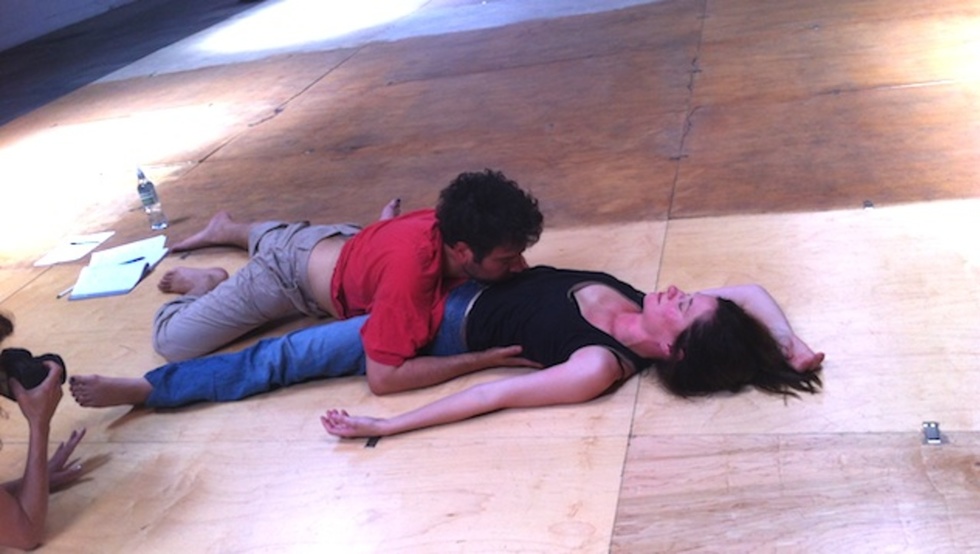 “It’s about being in feeling,” Jill Soloway tells me. “And now we’re getting weird.”

I’m on a three-way Skype call with writer, director and comedian Soloway and Joan Scheckel, who Soloway has shouted out in recent interviews for playing some fundamental part in getting Soloway's first feature film, Afternoon Delight, to the big screen (and the Best Director award at Sundance this year). Delight is about a stay-at-home mom (Kathryn Hahn) having a life crisis of sorts, who invites a sex worker (Juno Temple) into the home of her husband (How I Met Your Mother’s Josh Radnor) and son (Sawyer Ever) in an attempt to solve everyone’s problems.

“The first few weeks I was in Joan’s workshop, I was asking, what the fuck is this?"

But back to this "Director's Guru" stuff. Our call is on a Sunday afternoon and Soloway and Scheckel are in their respective sun-filled spaces in Silverlake, LA at the beginning of what I was not prepared to be a three-hour conversation. Officially, we have 40 minutes to talk about what, exactly, a director’s guru does.

It gets conceptual very quickly.

“It feels like we’re operating at the beginning of a revolution of what it feels like to engage with content,” goes Soloway. “To me, it’s about allowing the feminine to come into power over the next 100 years. Ok, that’s super getting into weird.”

Scheckel ensures that artists are connected with every bit of the process, from the screenwriting to the marketing.

“I just love the inner life, what can I say?” says Scheckel.

Directors, writers, cinematographers, actors, choreographers take Scheckel’s labs and workshops that can last from a few hours to a few months, and in which Scheckel, a former actress and trained opera singer, facilitates the process of bringing a story to life: ensuring that artists are connected with every bit of the process, from the screenwriting to the marketing.

“In the lab, I will simply say practical things like, ‘soften your jaw. And that is confronting. We’re at a point in our culture where the simple feels radical.”

The “being in feeling” and the “healing the divided feminine” talk: it’s sounding very LA and, frankly, a little off-putting. I flashback to the time a yoga sage from whom I was supposedly learning the art of meditation yelled mid-meditation: “if you are moving right now, you have not been meditating at home and you will not pass the course!” (I dropped out before I could fail.)

“I’m speaking as if I’m in a cult,” Soloway says, intuiting the urgency.  “The first few weeks I was in Joan’s workshop, I was asking, what the fuck is this? I was so angry. I just wanted to run. One guy did: he fainted and he never came back.”

Scheckel hoots. She’s sitting in front of a plain wall at home, wearing a faded T-shirt, no makeup, her casual curls piled around her alabaster face.

“I feel sometimes like we’re teetering towards a creative Monsanto. Where everything has to be whatever the last success was."

“Why were you scared?” she says, knowing the answer already.

It took Soloway three weeks to shift. The comedic writer who wrote for Six Feet Under and United States of Tara was taking a break from the workshop in the bathroom, where great things often happen, and she realized, “I’m in the presence of a master. This woman is like Stanislavsky or Adler.”

Scheckel studied at NYU and acted on stage for decades. She gave it up to get behind the scenes and develop some sort of technique that will somehow renavigate the unwholesome direction she believes we’re toying with.

“I feel sometimes like we’re teetering towards a creative Monsanto. Where everything has to be whatever the last success was. We have to shift our own thinking as the makers. Who are we writing for? How am I to touch that person? We have to respect the story.

“Our industry is struggling. Why should someone go to the movies? We’re working to shift what content feels like when you receive it.”

For Afternoon Delight, “It wasn’t that Joan was standing next to me on the set, it’s that she taught me a way to be present in my body so that I can be open to feeling,” says Soloway. “And for me to understand that my role as a director was to photograph feeling.”

Of the 76 films that have been completed through Scheckel’s labs, 74 have been released. They’ve been nominated over 600 times, won over 300 awards and have collectively earned 1.2 billion dollars.

Okay, okay. So how does she do this?

“To get a little practical,” Scheckel says. “I might do something simple like, say, relax your jaw. Is she relaxing her jaw, Jill?”

I’m smiling, nervous, irritated, realizing that my Sunday afternoon plans for 40 minutes from now probably won’t unfold. All of which makes it difficult to relax. My. Jaw.

“So first, we drop into the body. Then we do investigative work to think about what does the film mean. Then we look at the screenplay structure: how are the structural actions of the story revealing the meaning? In music, if a composer is writing about the ocean, you have to have a very gentle, lapping passage, then you have to have a crashing, more animated passage, then a deeper more resonant passage. A composer has to figure out how to do this through rhythm and so does a filmmaker.

“You have to build what the thing means through its actions.”

Of the 76 films that have been completed through Scheckel’s labs, 74 have been released. They’ve been nominated over 600 times, won over 300 awards and have collectively earned 1.2 billion dollars.

Scheckel has worked with: Mark Ruffalo, Zooey Deschanel, Bryce Dallas Howard, Marisa Tomei, Orlando Bloom. She worked with director Rupert Sanders on Snow White & The Huntsman, with Niki Caro on the adaptation of Witi Ihimaera's novel Whale Rider, which was nominated for an Academy Award. And she's the go-to for directors Jonathan Dayton and Valerie Faris - their Little Miss Sunshine won the Oscar in 2006, and Ruby Sparks was an indie hit in 2012.

Cultish, weird or utterly logical: it’s working. Behold a scene in Afternoon Delight, in which Rachel (Hahn) and Jeff (Josh Radnor) are having sex. Hahn’s entire upper chest and chin are flushed, a symptom anyone who’s had great sex will recognize. She’s on top of Radnor and screaming, “I’m doing it.”

That scene might be entirely attributed to Scheckel’s rather simplistic coaching.

On a day when the actors were scheduled for downtime amid shooting Afternoon Delight, Soloway took them all to Scheckel’s loft space. Scheckel had Hahn and Radnor lie on the floor and she designated four minutes to each year of Rachel and Jeff’s fictional 17 year relationship.

“I had them look at each other and find the first thing that they saw when they fell in love. And then direct their attention to that, whether it was their eyes or the inner elbow or a scar on the leg. And then create a story around that. Sometimes they would tell each other, sometimes just feel it in their bodies. And we went through it year by year.

“Four minutes for each year, not too shabby.”

Soloway sends me the photos of Hahn and Radnor “being in feeling” as the evolving Rachel and Jeff. These photos have me: I can see it in their faces, their flushed cheeks, their soft shoulders and throats, draped across each other, flopped on their sides gazing sleepily into the other’s eyes.

This all translates into a film that is raw and naturalistic with scenes that link not always obviously but without force, allowing for the downtime of everyday life. The dramatic twists are casually paced; there’s plenty of space for the nuance of character and emotion. Amid a familiar premise, no character or moment is glib or clichéd. The movie has hilarious scenes as well as scary ones.

The process of writing every other story but the one you want to tell is one familiar to many in the industry.

“If you want to see a film that allows you to hang out with your uncomfortable needs,” says Scheckel, "This is it. What do you do when you love your husband and your friendship has gotten to a certain level? That was your inner dialogue, Jill.”

It’s a narrative many viewers can identify with and not the narrative Soloway showed up to Scheckel’s lab with.

The process of writing every other story but the one you want to tell is one familiar to many in the industry.

“Everyone who I work with now knows that my goal is to be in feeling, so that we can go to places so that we can record how it is to be human,” says Soloway, no longer sheepish about “super getting weird.”

Like any new age spiritualism that catches on, spending time with Scheckel kick starts an enigmatic effect wherein a whole lot of feel good talk actually starts to make you feel good—and creative.

“It’s the magic of action and feeling. As a stage actor, the audience, if you’re not connecting to them on a feeling level, they walk out. They just leave,” Scheckel says.

By hour two of our conversation, she has me relaxing my jaw again. “This is what people pay the big bucks for,” she assures me. My Sunday is already given over, why not just do this.

Scheckel sends me a photo of myself with closed eyes, relaxed jaw. I look vaguely sleepy, maybe a little moody and entirely into it.

“Where are you?” she asks. “What is the light like? Is there a shape you’re seeing?”

“If you were in my workshop, I’d suggest that’s where you want to set your story. On that beach.”

The cinematographer of Afternoon Delight, Jim Frohna is a friend and devotee of Scheckel. By day three on set, Soloway’s AD, choreographer, actors were all on board.

“Now, I speak this language to everybody. We’re finding beats and scenes and stories about being. We’re not there to make a TV show, to make a living, we’re just there to be present in feeling.”