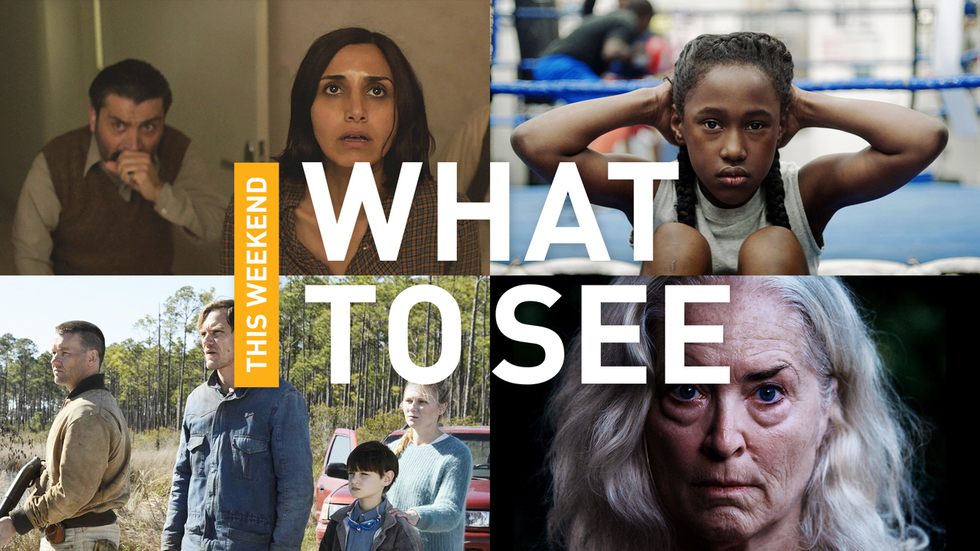 Clockwise from top left: UNDER THE SHADOW, THE FITS, KRISHA, and MIDNIGHT SPECIAL

It’s the dream of every young director at a film festival: In 2007, first-timer Jeff Nichols made his behind-the-camera debut with Shotgun Stories, which premiered at the Tribeca Film Festival and established Nichols as one to seriously watch. The Arkansas native's next two films, the psychological thriller Take Shelter (2011) and the Charles-Dickens-like coming-of-age drama Mud (2012), both made their way to the Cannes Film Festival, establishing Nichols as one of American indie cinema’s brightest new voices and paving the way for his first shot at big-studio fare with sizable budgets.

The good news for everyone who caught Shotgun Stories at Tribeca ’07 is that Nichols' transition into major Hollywood territory isn’t just smooth—it’s a Hollywood anomaly: a sci-fi thriller that’s as emotionally affecting as the most straight-laced, genre-light drama.

Proudly showing his love for '80s-era Steven Spielberg, Nichols applies his acclaimed knack for delicate characterization to the science fiction genre with Midnight Special, a deeply moving story about the boundless love between a father and his son under the strangest of circumstances. The incomparable Michael Shannon (who’s starred in all of Nichols' films so far) plays Roy, the dad to newcomer Jaeden Lieberher's Alton, a stoic eight-year-old who's being chased after by a religious cult and the FBI for one big reason: He's inhuman and somehow able to alter electricity and various technological devices whenever he's not shooting blue laser-beams out of his eyes. Having rescued him from the cult’s compound, Roy recruits his old pal Lucas (Joel Edgerton) and Alton's mother (Kirsten Dunst) to help bring Alton to a specific location before the little guy's powers turn against him. Roy doesn’t understand his son’s abilities, but that's okay—he loves Alton too much to let questions and the need for an explanation stifle his best chances at survival.

While Midnight Special is pitched as a thriller, it's never seat's-edge tense, a byproduct of Nichols' preference for tender optimism over narrative darkness. Whereas Take Shelter perfectly matched hopefulness and dread, Midnight Special totally abandons the latter, an effect stemming from its maker's upbeat sensibilities and a potential deal-breaker for audiences looking for more sci-fi akin to last week's 10 Cloverfield Lane. But the film's earnestness is so masterfully sustained and superbly acted by Nichols' cast, it's easy to overlook the director's reluctance to go for the jugular. Nicholas has cited John Carpenter as one of Midnight Special's biggest influences, but that's misleading—this is Amblin-esque, all the way through. This isn't The Thing, it's Close Encounters of the Third Kind.

Where to see it: Regal Union Square

Like John Cassavettes' A Woman Under the Influence merged with Roman Polanski's Repulsion, Shults' first feature mines psychological horror and domestic tragedy out of the simplest of set-ups: A middle-aged woman named Krisha (played by Krisha Fairchild, Shults' real-life aunt) attends her family's big Thanksgiving dinner party after several years in a self-given exile due to addictions and an estrangement from her twenty-something son (played by Shults). Over a harrowing 24-hour span, Krisha tries to reconnect with her loved ones but can't shake her demons, and Shults' unnerving sound design, cryptic visualizations, and surgical pacing keep Krisha's haunting inevitability at the forefront. It's clear that her day isn't going to end well from the opening scenes, yet it’s impossible to stop watching.

Credit that magnetic quality to Shults' masterful execution—not unlike Robert Eggers' The Witch, Krisha is a first movie that's so assured and so terrifically made that it's hard to believe its novice creation. Shults poured his heart and souls into every frame. Shot in nine days at his mother’s house for $100,000, Krisha is the epitome of do-it-yourself cinema; directly inspired by Shults' father's and aunt's respective battles with substance abuse, it's brutally personal. And through the raw impact of its eponymous character’s downward spiral, it's one of the best cinematic debuts in years.

What do Spike Lee, Christopher Nolan, Steven Spielberg, Chantal Akerman, and Kelly Reichardt all have in common, besides the obvious "they're all excellent filmmakers" answer? They were all introduced to New York City's audiences via the annual New Directors/New Films series, co-programmed by the Museum of Modern Art and the Film Society of Lincoln Center. Now in its 45th year, and running through March 27, ND/NF is one of the city's yearly high-points for NYC movie lovers who are eager to catch an early look at who has next in cinema. Some of the best and most provocative indie movies of the last few years passed through ND/NF, including Ana Lily Amirpour's A Girl Walks Home Alone at Night, Justin Simien's Dear White People, Shane Carruth's Upstream Color, Dee Rees' Pariah, Joshua Oppenheimer's The Act of Killing, and Marielle Heller's The Diary of a Teenage Girl.

It's too early to predict who from ND/NF's 2016 lineup will eventually join the name-brand ranks of Nolan and Spielberg, but there are plenty of strong candidates. This weekend alone features several intriguing options. The program's opener, Under the Shadow, puts Iran on the horror genre's map thanks to writer/director Babak Anvari's blending of supernatural jolts and social relevance. First-timer Anna Rose Holmer made serious noise at Sundance this year with The Fits, about a young tomboy who joins a dance group just as the dancers start suffering from inexplicable convulsions; Donald Cried, currently turning heads at SXSW, finds director Kris Avedisian remixing the buddy-comedy formula with reckless, unhinged abandon; Chinese filmmaker Zhang Hanyi brings understated elegance to the supernatural with Life After Life; and Brazilian director Anita Rocha da Silveira applies Lynchian surrealism and a Heathers-like dark comedy to the teenage slasher movie genre with Kill Me Please.

Where to see it: Museum of Modern Art, Film Society of Lincoln Center; buy tickets here.

In the wake of his infant son's terminal cancer diagnosis, designer Ryan Green took a unique approach as a means of coping with his family's new reality, creating a video game about the harrowing experience. The result, That Dragon, Cancer, will forever change the way most people look at gaming.

Detailing the stages of the project from inception to execution, this moving documentary pulls audiences into the day-to-day plight of the Green family. From dialogue recording studios to video game conventions, the concept of the game deeply affects its players and all of those who help to create it. The film closely examines that creation, opening a window into the sorrowful inspiration that often contributes to memorable works of art. The film gives us an insider’s look at the evolution of a medium, but at the heart of it all is a father and his family, struggling to share their fears, heartache, and joy with anyone willing to play the game and step into their shoes. —Loren Hammonds (via the 2015 Tribeca Film Festival guide)

Where to see it: Made in NY Media Center by IFP

Because the liquor used for those "sake bombs" you down every weekend comes with a surprisingly profound backstory...
The Birth of Saké (2016; screened at the 2015 Tribeca Film Festival)
Director: Erik Shirai

Official synopsis: "In a world where most mass produced goods are heavily automated, a small group of artisans must brave unusual working conditions to preserve a 2000-year-old tradition that we have come to know as saké. The Birth of Saké is a cinematic documentary that reveals the story of passionate saké-makers and what it takes to make world-class saké at Yoshida Brewery, a 144-year-old family-owned small brewery in northern Japan. The workers at Yoshida Brewery are an eclectic cast of characters, ranging from 20 to 70 years old."

"As a vital part of this cast that must live and work for a six-month period through the brutal winter, charismatic veteran brewmaster Yamamoto (65) and the brewery’s sixth-generation heir, Yasuyuki Yoshida (27), are keepers of this tradition, and are the main characters who bring the narrative forward. Currently, stiff competition and the eventual retirement of experienced workers intensify the pressure of preserving quality of taste, tradition and brand reputation for Yoshida Brewery. As craftsmen who must dedicate their whole lives to the making of this world-class saké, their private sacrifices are often sizable and unseen."